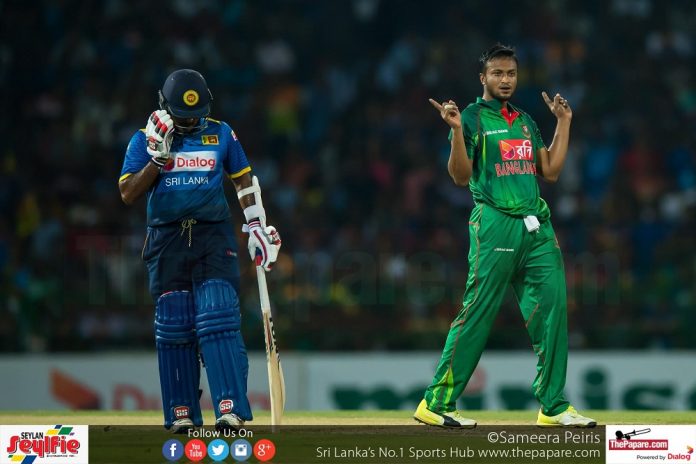 Sri Lanka sank to a massive 163-run loss in their 2nd game of the Tri-Series in Bangladesh, against the hosts. The win was Bangladesh’s biggest win in terms of runs in ODIs.

Sri Lanka’s chase of 320 got off to the worst possible start as Kusal Perera, who made a fluent 80-odd in the last game, was clean bowled in just the 2nd over of the innings off the bowling of Nasir Hossain. Upul Tharanga and 1 drop batsman Kusal Mendis put on 41 for the 2nd wicket but found the going tough with Mashrafe Mortaza consistently beating the bat. Just as Tharanga seemed to be getting some fluency going in his batting, Mortaza finally got his man, coming around the wicket as Tharanga tried to loft the ball over the inner circle and was caught at mid-off.

With 10 overs gone and Sri Lanka struggling to get going, the responsibility of rebuilding fell on the youngsters Kusal Mendis and Niroshan Dickwella. However, they were not up to the task as Mortaza bowled an excellent spell and was rewarded with the wicket of Mendis for 19.

Wickets kept falling at regular intervals as Sri Lanka fell behind the eight-ball and Bangladesh continued to strangle the batsmen. Dinesh Chandimal looked relatively fluent and survived a close LBW call only to be run-out off the next delivery.

By the time Thisara Perera came to the crease, Sri Lanka were more or less out of the game on 106/5 but the left-hander came out all guns blazing, smashing 29 off 14 balls. He slammed 4, 6, 4, 6 and then holed out in the deep going for another 6.

The tail crumbled at the hands of Shakib Al Hasan and Rubel Hossain to leave Sri Lanka 163 runs short of the target.

Earlier in the day, Bangladesh’s big three, Shakib AL Hasan, Tamim Iqbal and Mushfiqur Rahim made half tons the Tigers cantered to 320/7 in their allocated overs after Mortaza had won the toss for the hosts.

The openers Iqbal and Anamul Haque put on 71 for the 1st wicket as a catch, stumping and run-out went a begging in the 1st ten overs. Haque, in particular was living dangerously and his luck finally ran out when he gloved a ball to the keeper Dickwella.

With Angelo Mathews ruled out for at least the next couple of games, Sri Lanka brought in Niroshan Dickwella while Nuwan Pradeep replaced Dushmantha Chameera.

For Bangladesh, medium pacer Mahammed Saifuddin came into the side in place of left arm orthodox bowler Sunzamul Islam to further strengthen the pace attack.

Sri Lanka have now lost both of their games and will need to win their remaining games to ensure a place in the final. 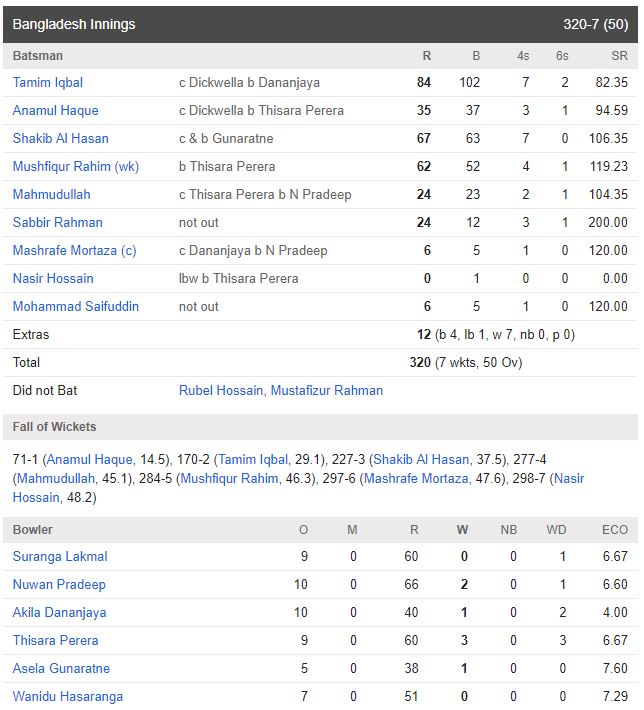 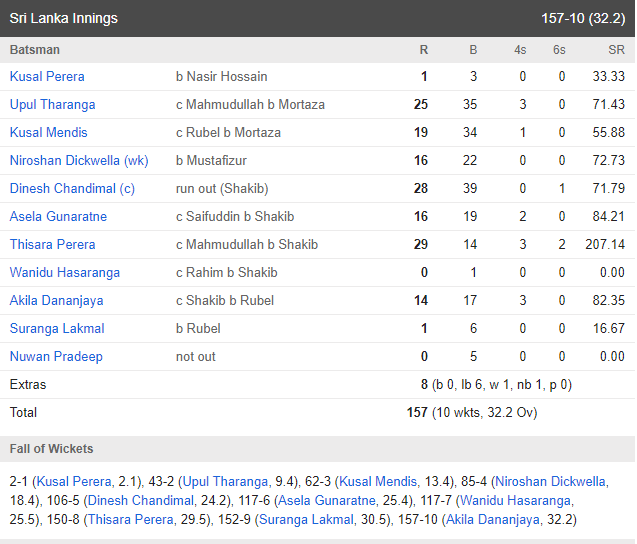 “I will never forget that Run-Out which won us the first...