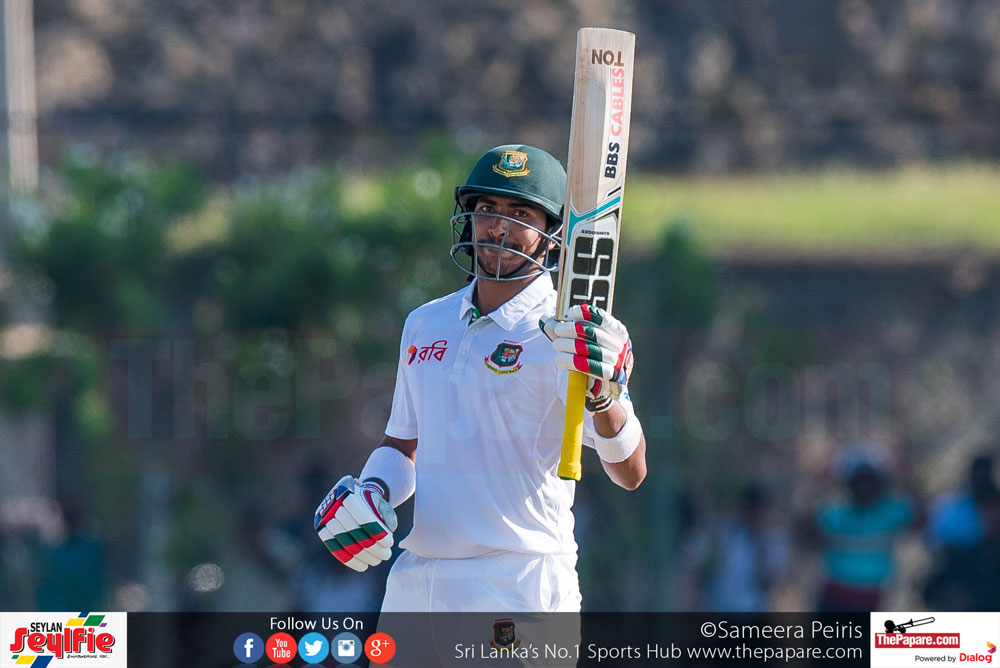 The Bangladeshi opening pair of Tamim Iqbal and Soumya Sarkar put on 118 for the 1st wicket to ensure that the hosts’ spinners did not have it all their own way on day 2 of the 1st Test being played at the Galle International cricket Stadium.


Like the Sri Lankans, Bangladesh too had their share of luck when Dilruwan Perera put Sarkar down in the gully when he was on 4; Sarkar stood unbeaten at the end of the day, making 66 off 133 deliveries. Save the opportunity given in the 3rd over, the Bangladeshi openers looked assured on a track which did not seem to play any differently to how it had done of the 1st day. The pair took turns paying the aggressor and brought up their 50s within a few deliveries of each other.

Tamim was dismissed in bizarre fashion as he ran aimlessly down the wicket with no clue as to where the ball was. Niroshan Dickwella flicked off the bails and Sri Lanka finally had the much needed breakthrough. Mominul Haque followed soon after when a change of ends by Perera saw him trapping the left hander right in front of the stumps.

Earlier in the day Kusal Mendis, Dickwella and Perera had produced the goods with the bat, 194, 75 and 51 respectively. Mendis who was given a reprieve off the very 1st delivery he faced yesterday had more good fortune this morning when he top edged the ball down to fine leg. The fielder in the deep, Mustafizur Rahman, got under the ball and almost too casually stepped right over the ropes as he took the catch; Subashish Roy was the unlucky bowler once again. With the six, Mendis went past his previous top score of 176, which he made against Australia last July.

His luck finally ran out however when, in an attempt to move to his maiden double ton with a six, he lofted the ball towards long on. It was touch and go but Tamim Iqbal managed to make the catch and subsequently toss the ball up in the air as he stepped out of bounds and then return into the playing area to claim the catch.

At the other end Dickwella, playing his 1st test in nearly 3 years, continued to play his shots, taking the aggressor’s role in the partnership. He made 75 off just 76 deliveries and will be severely disappointed that he could not go on to make a big one as a century seemed to be there for the taking.

Perera made his 3rd Test 50 but was dismissed in the bid for quick runs in the 2nd session of play as the Bangladeshi bowlers took little over an hour after lunch to get rid of the Lankan tail.

Mehedi Hasan’s patience paid off as he claimed three prize scalps of Mendis, Dickwella and Perera to finish with figures of 4/113. 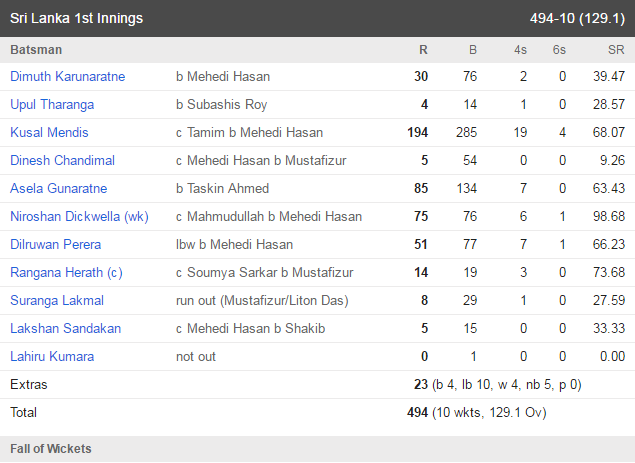