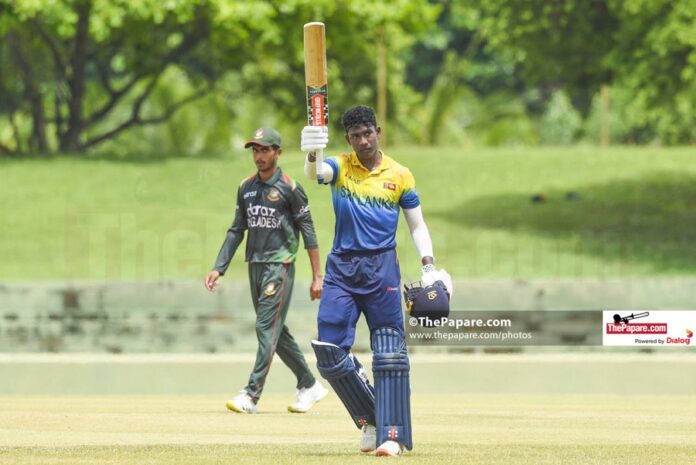 The 5-match Youth ODI series in the Bangladesh U19 Tour of Sri Lanka 2021 came to a close with Sri Lanka winning the series 5-0 after a close victory in the last game.

Despite losing the first wicket early, Sri Lanka got off to a flying start with the newly promoted opener Chamindu Wickramasinghe smashing a ton, and the man-in-form, Shevon Daniel, scoring a stylish half-century.

The pair posted a 154-run stand for the second wicket, putting Sri Lanka in a commanding position in the game.

Chamindu walked back with 102 runs to his name and he was followed by Sadisha Rajapaka, Dunith Wellalage, Vinuja Ranpul, Raveen de Silva and Wanuja Kumara, as Sri Lanka went from 191 for 4 to 240 for 9 in no time.

Mushfik Hasan was brilliant with the ball for Bangladesh as he bagged 3 wickets for just 37 runs in his 10 overs.

Seamer Ripon Mondol and left-arm spinner Ahosan Habib supported him with 2 wickets each.

Bangladesh too got off to a steady start. They were able to post two good partnerships for the first and the second wickets.

However, it was the same demon that had been troubling Bangladesh throughout this tour that returned for their dismay in this game too. The  batters were lacking the temperament to build a long knock.

All batters in the top-four got past the 30-run mark, with two even going on to record half-centuries, but failed to pull through for a victory.

It was the same duo, Mahfijul Islam (62) and Aich Mollah (55), who kept showing resistance and intent throughout this series, that took Bangladesh so close to the target in this match as well.

It was a collective bowling performance from the Lanka bowlers, with paceman Vinuja Ranpul and the Skipper Dunith Wellalage sharing the limelight for bowling as they bagged 2 wickets each.

Sri Lanka won the game by 4 runs and captured the series 5-0.

Sri Lanka classy left-hand bat Shevon Daniel was adjudged the man of the series in his debut series for Sri Lanka youth.