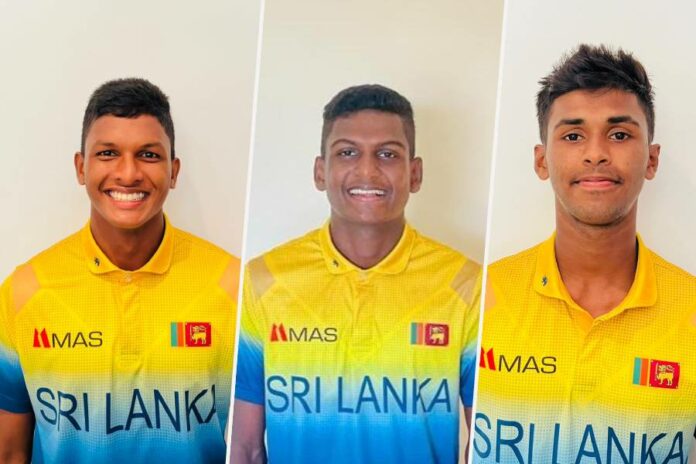 The first four-day Youth Test between Sri Lanka U19 and England U19 began yesterday (21) at Chelmsford.

Ben McKinney, the English skipper, won the toss decided to bat first on a very good surface for batting.

England youth batters who looked to be aggressive from the word go continued that pattern of scoring fast until the fall of their last wicket at 387 in just 78.3 overs.

George Bell, who scored a swashbuckling knock of 107 off just 96 deliveries, completely dominated the young Lankan bowlers, his knock including 16 fours. Ross Whitefield, who also batted brilliantly made a fine 86 which included 8 fours and a six.

Bell and Whitefield also managed to put together an express 185-run stand for the 3rd wicket in just 182 deliveries. After the loss of the 3rd wicket England U19 faltered thanks to a great phase of bowling by the visitors as they grabbed the next 5 wickets for just 67 runs.

But lower order batsman Bertie Foreman managed to bring in some momentum once again to his team with a brisk unbeaten knock of 58 from 56 balls. Thanks to this knock from Foreman, England U19 scored 71 runs off their last wicket.

For the visiting Sri Lankan U19 team, 17-year-old speedster Duvindu Ranatunga took 4 wickets for 100 runs. Ranatunga’s 4 scalps included the prized ones of Bell and Whiteley who troubled the Sri Lankan attack. Dulaj Samuditha provided him good support with a 2-wicket haul alongside Wanuja Sahan who also took 2 wickets.

With 9 overs left in the day the Sri Lankan openers walked out to bat hoping to reach stumps without any casualties but unfortunately lost Sadisha Rajapaksa for 11, leaving Sri Lanka won 25/1 at the close of first day’s play.

Asitha Wanninayake, the unbeaten batter was on 13. With a deficit of 362 runs and a new ball at play, the Sri Lankan top order will have their work cut out  to take the upper hand in this encounter.

Sri Lanka U19 won by 3 wickets