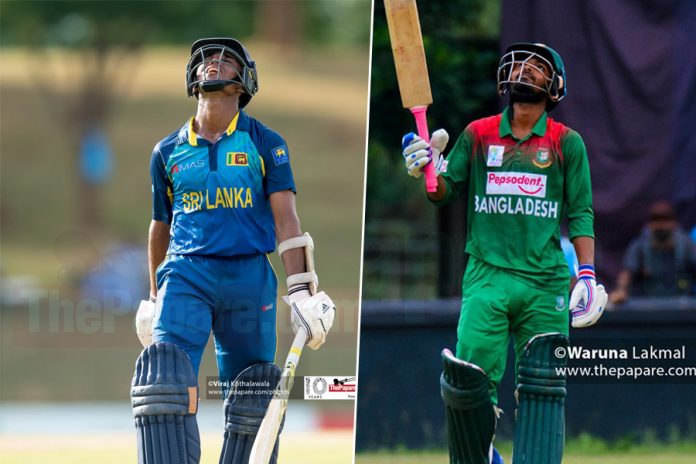 Bangladesh U19 registered yet another victory against the touring Sri Lanka U19s today at the Zahur Ahmed Chowdhury Stadium in Chattogram to complete a successful 5-match Youth ODI series win by a commendable margin of 4-0.

Playing the dead-rubber to salvage pride, Sri Lanka U19 skipper Nipun Dananjaya lost the toss and was asked to field first with his XI which fielded an extra spinner in Rohan Sanjaya who came in replacing Amshi de Silva. Avishka Tharindu also made a comeback replacing Sonal Dinusha while wicket-keeper Chihan Kalindu got his first game of the series at the expense of Navod Paranavithana.

Despite a good start by Yasiru Rodrigo who provided an early breakthrough dismissing Pritom Kumar in the very first over, the tourists were not allowed to take control of the game just like in the previous games of the series. The positive batting of the Bangladeshi batsmen helped them put pressure on the Lankan bowlers throughout the innings.

Solid partnerships between almost every batting pair ensured Bangladesh a very good total as they ended their innings with an entertaining cameo by all-rounder Avishek Das. Das remained unbeaten scoring 24 off 12 with two sixes as he took full advantage of the foundation set by the top-order and middle-order. His blitz helped them score almost 50 runs in the last 5 overs taking them to 283.

The anchor of the innings was once again Tawhid Hridoy, who scored his 3rd consecutive century in the series, becoming the first-ever batsmen to do so in the history of Youth ODIs. He was in fact was unbeaten on 82 in the 2nd Youth ODI steering Bangladesh to a win after the first game was washed out. He was involved in two big partnerships with Prantik Nawrose and Parvez Hossain to steady the Bangladeshi innings.

Nalandian all-rounder Chamindu Wijesinghe was once again expensive, conceding 48 runs in 7 overs, which included 8 wides. Despite ending with a decent economy, Rodrigo also had bowled 5 wides. The two opening pacies collectively giving away 13 extras was unaffordable. The 3 spinners were economical, however, as they provided 4 wickets also.

The run chase started awfully for Sri Lanka as opener Kalindu and number 3 batsman Thaveesha Abishek were dismissed in the 1st and 2nd overs respectively. Sri Lanka then went through their best phase of the game with a brilliant act of rescue by opener Mohammad Shamaaz and Ravindu de Silva. The two right-handers added 87 runs bringing Sri Lanka back in to the game.

Introduction of spin brought Bangladesh back to the driving seat as they kept striking regularly. A couple of run-outs in between also helped their forward march. De Silva fell for a well-fought 84 after skipper Dananjaya became the first victim of a run-out. All-rounder Avishka Tharindu also ran himself out blowing Sri Lanka’s last hope after a partnership of 40 with Sanjaya, which looked threatening.

Hridoy’s batting brilliance stole the limelight of the entire series while Sri Lanka’s Paranavithana (rested today) finished 2nd to him in the top-run getters table – 232 runs behind Hridoy to be exact (Hridoy played 4 games while Paranavithana played 3). While Hridoy scored 3 centuries alone, only Ravindu de Silva and Shamaaz were able to score an aggregate of 100+ after Paranavithana for Sri Lanka.

In bowling it was clearly Amshi de Silva (also rested today) who performed the best with 6 wickets in 3 games. Yet he was expensive with an economy of 7+. Dilshan Madushanka could take just 3 wickets in 2 games with an economy just below 7. The spinners were economical, but failed to provide useful breakthroughs.

Sri Lanka will now head back home with so many questions to be answered before the U19 World Cup in South Africa early next year.