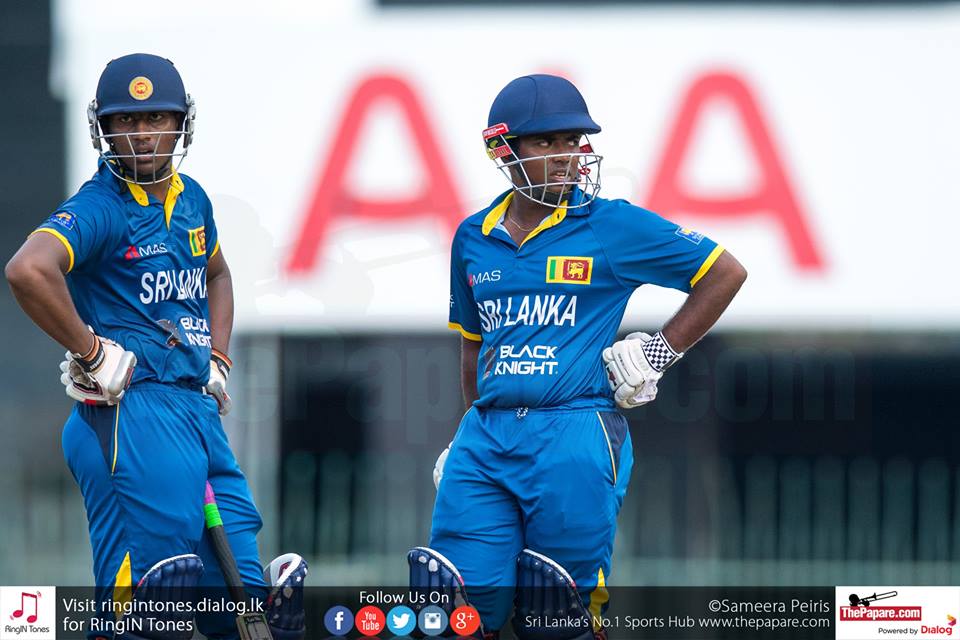 Sri Lanka under 19s lost their opening game in the U19 Tri-Nations tournament 2015 when they went down fighting by 4 runs (D/L method) at the hands of India under 19s at R. Premadasa International Stadium on Saturday.

Right-handed opener Avishka Fernando of St. Sebastian’s College and skipper Charith Asalanka from Richmond College stroked 75 and 74 respectively in a spirited chase after Amandeep Khare’s excellent century which laid the foundation for the visitors.

The Indian skipper Ricky Bhui won the toss and elected to bat first on a sunny morning. The Indian opening pair of Washington Sundar and Ishan Kishan put up a strong 77-run stand before the latter was undone by seamer Asitha Fernando for 33.

Sundar was then joined by Khare and they orchestrated a 107-run worth stand for the second wicket before the former became vice-captain Sammu Ashan’s solitary wicket.

Khare was timing the ball perfectly throughout his 98-ball 102 which included 9 fours and a six. Virat Singh chipped in with a 23-ball 30 as India U19s posted 284 for 7 in their allotted 50 overs. Asitha Fernando was the pick of the bowlers taking 3 for 54. Seamer Lahiru Sudesh bowled his heart out but went wicket-less during his 10-over spell which gave away only 39 runs.

Chasing a revised target of 255 in 47 overs, Sri Lanka began well, with Avishka adding 60 for the first wicket with left-hander Salinda Ushan. The Isipathanian skipper was dismissed for 18 by Rahul Batham in the 12th over. Avishka was then joined by his skipper Charith and they added 94 for the 2nd wicket.

Avishka was run-out unfortunately in the 31st over with Sri Lanka needing 101 from 99 balls. He faced 89 balls for his delightful 75 which had 4 fours. Sammu contributed with 23 while Wanindu Hasaranga made a run-a-ball 27. Batham took the prized scalp of Asalanka in the start of the 41st over. The left-hander made 74 in just 86 balls and his inning had 7 fours. The hosts’ fell short by 4 runs as Kamindu Mendis remained unbeaten on 15 from 20 balls alongside wicket-keeper Vishad Randika.

Sri Lanka U19s will take on England U19s on 14th December at the same venue.