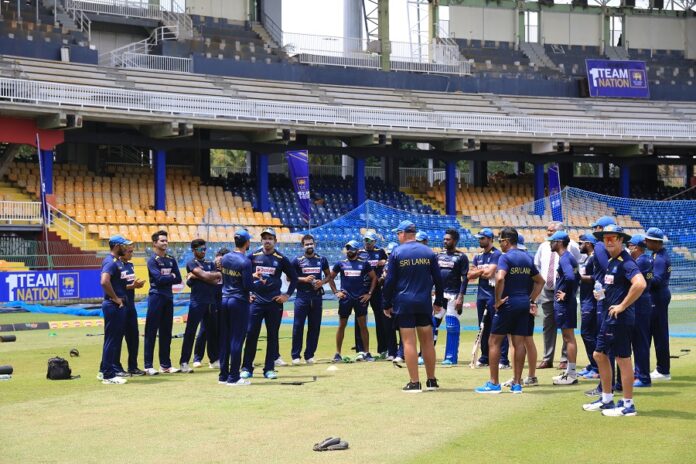 The Sri Lankan squad, which entered a bio-secure environment in Colombo on the 21st of September, in preparation for their tour of Oman and the ICC Men’s T20 World Cup next month, have ramped up training sessions at R. Premadasa International Stadium, ThePapare learns.

The squad, led by all-rounder Dasun Shanaka, commenced their gym and skill training sessions on 24th of September, having completed their mandatory three-day room quarantine. Before leaving for Oman on the 3rd of October, the Team Management have made arrangements to play three intra-squad games at Khettarama, under lights.

Following the announcement of 19 players (15-member squad and 4 travelling reserves) for the ICC Men’s T20 World Cup on the 12th of September, SLC made five late additions to the travelling party after the completion of the 3-0 drubbing at the hands of South Africa.

With all-rounder Lahiru Madushanka ruled out of the 16-team tournament due to a collarbone injury sustained during the 3rd T20I against the Proteas, SLC added Minod Bhanuka, Lakshan Sandakan, Ashen Bandara, Pathum Nissanka and Ramesh Mendis, giving the selectors ample options to make late changes to the squad if the need arises.

The selectors will have seven games in total, 3 intra-squad games, 2 T20Is vs Oman and 2 official warm-up matches to decide on the possible replacement for Madushanka. Despite the deadline for finalizing the squad being 10th of October, the selectors have the luxury to take their time since injury replacements are allowed even if after the deadline as per ICC guidelines.

Currently, 20 players are training at full throttle whereas injured Kusal Perera is going through rehabilitation work with the medical staff, while Wanindu Hasaranga and Dushmantha Chameera are involved with Royal Challengers Bangalore at the Indian Premier League 2021 in the UAE.

Sri Lanka’s most experienced T20 batsman – Perera, nursing a hamstring strain, is expected to be fit in time for the two official warm-up games, organized by the International Cricket Council on the 12th and 14th of October. One of the opponents for their warm-up fixtures has been confirmed as Bangladesh, while the other game will be most likely against Scotland or Papua New Guinea.

Sri Lanka will start their ICC Men’s T20 World Cup 2021 campaign in the First Round – Group A against Namibia on the 18th of October, followed by games against Ireland (20th) and Netherlands (22nd). If they qualify for the next round – irrespective of the standings  in Group A (first or second), Sri Lanka will be in Super 12 – Group A alongside West Indies, South Africa, England, Australia and B2 from the first round.