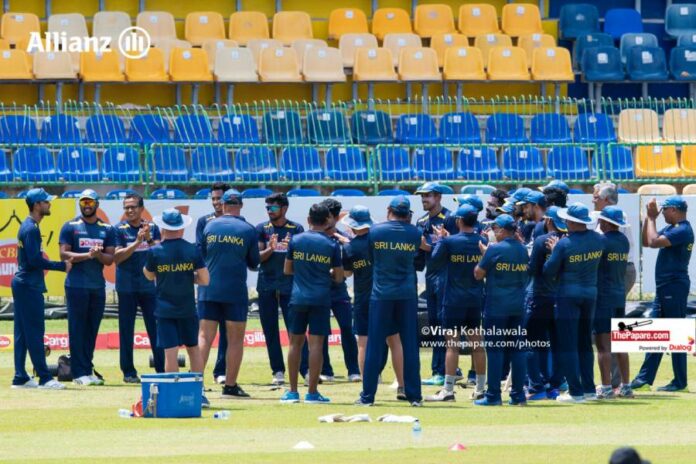 Sri Lanka Cricket has given the ‘Green Light’ to take four more additional players for the upcoming Oman series and ICC Men’s T20 World Cup in the UAE following a request made by the National Cricket Selection Committee.

From the squad previously announced by Sri Lanka Cricket, injured fast-bowling all-rounder Lahiru Madushanka will be replaced by wicket-keeper batsman Minod Bhanuka while the new additional players set to take the flight on the 3rd of October are Ramesh Mendis, Pathum Nissanka, Ashen Bandara and Lakshan Sandakan, ThePapare learns.

The team management is hopeful that Perera will be fit in time for the T20 World Cup at least. The selectors have the opportunity to make any changes to the final squad until the 10th of October.

#PlaySelector – Who should replace Lahiru Madushanka in the T20 World Cup squad?

The International Cricket Council will only grant accreditation for only 30 members (Players & Support Staff) inside the dressing room during match days in the ICC Men’s T20 World Cup 2021. Previously the number was 23 but due to the Covid-19 pandemic, it was raised to 30. However, if any participating country wishes to have more reserve players, etc, they can be in the team’s bio-secure environment at the expense of the respective cricket board.

The national team will assemble on 27th September for training, a week before leaving for Oman. The two games against Oman will be played on the 7th and 9th of October. Sri Lanka is expected to play two official warm-up games on the 12th and 14th in the UAE. One of the opponents for their warm-up game has been confirmed as Bangladesh, while the other game will be most likely against Scotland or Papua New Guinea.

Sri Lanka will play their first game in the First Round – Group A against Namibia on the 18th of October, followed by games against Ireland (20th) and Netherlands (22nd). If Qualified, Sri Lanka will be in Super 12 – Group A alongside West Indies, South Africa, England, Australia and B2 from the first round.