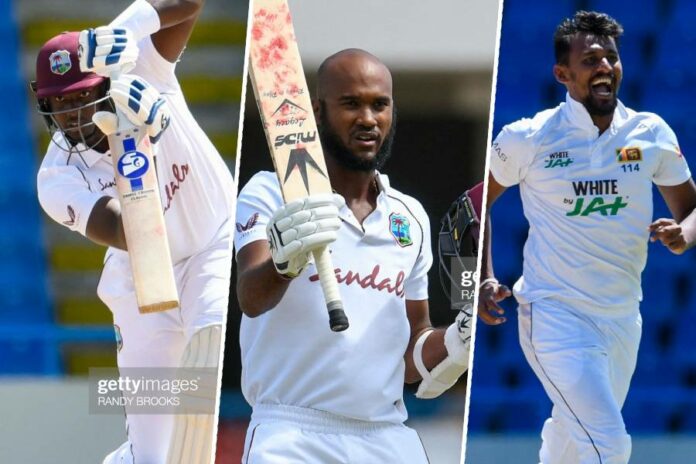 West Indian skipper Kraig Brathwaite and former skipper Jason Holder stroked fifties with the bat as the hosts set a challenging target of 377 runs for the visitors at the end of the fourth day of the second Test match between Sri Lanka and West Indies played at Sir Vivian Richards Stadium in Antigua.

Sri Lanka started their day on 250 for 8 with Pathum Nissanka and Lasith Embuldeniya in the middle, trailing 104 runs behind West Indies’ first essay. Nissanka got to his fifty in the very first over of the day but could not carry on as he was dismissed for 51 runs. Sri Lanka eventually bowled out for 258 runs in 107 overs.

West Indies began their second innings with a lead of 96 runs but the visitors managed to get the early breakthrough as the opening batsman John Campbell dismissed by Suranga Lakmal for just 10 runs.

Even though Sri Lanka got off to a good start with the ball they had to face a huge blow as their main spinner Lasith Embuldeniya was injured and had to be stretchered off the field in the 6th over.

Jermaine Blackwood who was promoted to Number three-position, had a lucky run-up to Lunch as he survived a close lbw decision and a dropped catch but his luck eventually came to an end as he nicked behind a short ball of Dushmantha Chameera for 18 runs at the stroke of Lunch.

At 58 for 2, the skipper Kraig Brathwaite and Kyle Mayers got together in the middle and built a valuable 82-run partnership for the 3rd wicket before Lakmal came back and break the partnership in the 44th over.

The hosts continued to dominate with the bat even after the post Tea session and declared their innings at 280 for 4 setting a challenging target of 377 runs for the visitors. Brathwaite once again became the top scorer of Windies’ innings scoring 85 runs while former skipper Jason Holder remained unbeaten on 71 runs for the hosts.

Chasing 377 runs to win, Sri Lankan openers Dimuth Karunaratne and Lahiru Thirimanne got off to a solid start as they put on 29 runs in 9 overs at stumps on day four.