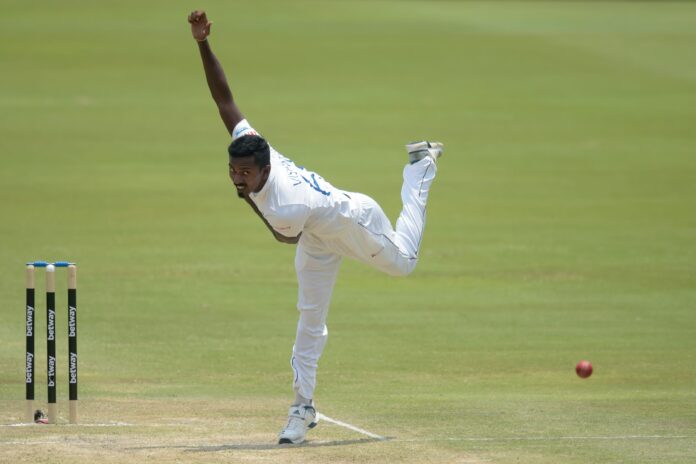 Sri Lanka got ahead of the Proteas today as they cleared the deficit of 145 runs thanks to a brilliant knock by skipper Dimuth Karunaratne who was on 91 at the stumps on day 2 of the second Test between Sri Lanka and South Africa at Johannesburg.

Lankan seamers looked clueless in the first hour of play as the batting pair were gifted with free-runs without any trouble. Elgar reached his 3rd century against Sri Lanka after a brillaint knock followed by his 95 in the last game while van der Dussen also helped himslef to his 3rd Test half century. Duo added 68 runs in the first hour of day 2 and looked their way to another 600+ score.

Read More – Elgar & Nortje sabotage the Lankans on day one

However, from the 2nd hour onwards things turned around in Sri Lanka’s way as 184-runs worth partnership was broken by Dushmantha Chameera as the centurion was  dismissed for 127. Soon after the main playmaker’s diparture, Dasun Shanaka sent van der Dussen and last game’s almost double centurion Faf du Plessis to the dressing room with his 120kph seam bowling.

After that, two Fernando’s Vishwa and Asitha started hitting the right lenghts constantly and restricted the South African innings to 302. It was a spectacular collapse as the home team lost 9 wickets for 86 runs after being on a strong position of 218/1. This is only the fourth time in history that Sri Lanka have taken the last 8 wickets for a total of 85 runs or lesser while playing away from home.

Vishwa Fernando was the star of the show for Sri Lanka as he picked up his maiden 5-fer becoming the highest wicket taking Sri Lankan after Muttiah Muralitharan. He also became the 7th Sri Lankan to pick a Test 5-fer in the rainbow nation. Insterestingly, Fernando’s top four best figures have been registered in South Africa.

With a deficit of 145 runs at the board, Sri Lanka lost the big wicket of Kusal Perera in just 3rd over but skipper Dimuth Karunaratne and Lahiru Thirimanne steadied the ship, combining for a 85 run-partnership for the 2nd wicket ruling out a potential 2nd consecutive innings defeat in South Africa.

Thirimanne batted superbly for a 31 but tickled one down the leg side to go out in a tame way. Just after that, Kusal Mendis grabbed a pair as he was dismissed for the 3rd duck of the tour. Sri Lanka lost 3 quick wickets after that successful partnerhship between Karunaratne and Thirimanne, granting the control back to South Africans.

However, Sri Lanka skipper stood tall from the other end despite all the carnage and closed in on his 10th Test century to take Sri Lanka to the lead by 5 runs at the stumps. He showed the way for his team with an unbeaten 90-plus, fighting fire with fire in an enterprising knock. An adventure-loving Dickwella reached unscathed to the stumps while living dangourasly at the other end.

The decisive 3rd day will depend on how well Karunaratne, Dickwella and Sri Lankan lower order handle themselves in the middle agaisnt the home boys. Keep it logged into ThePapare.com for the latest updates, news, photos, videos of this Sri Lanka tour of South Africa.