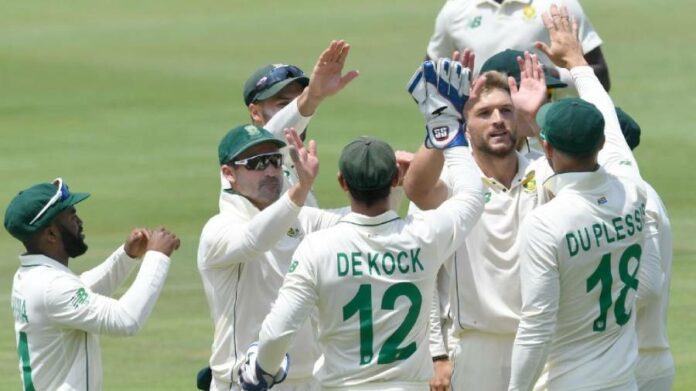 The visiting Sri Lankans were defeated by an innings and 45 runs by South Africa at the SuperSport Park Stadium, Centurion in the first Test match of the 2-match series.

The Proteas seamers wasted no time, picking 5 wickets in the morning session to reduce the islanders to 148/7 and eventually roll them out for 180 runs to register a commanding victory.

The Sri Lankan defeat was inevitable with them carrying quite a few injuries in the playing XI and as the South African batsmen milked them for runs on day 3, setting a lead of 225 in the first innings. Sri Lanka lost Skipper Dimuth Karunaratne and Kusal Mendis on the 3rd day evening.

Dinesh Chandimal and Kusal Perera looked promising in the morning on day 04, but Chandimal eventually fell for a snorter of a delivery from Wiaan Mulder for 25. However Kusal Perera went on his usual attacking game against the South African pacers and reached 1000 Test runs plus another half-century century in the rainbow nation.

Apart from Perera, no other specialized batsmen contributed to the Sri Lankan total much, as Sri Lanka lost wickets in regular intervals. Perera raced to 64 before he nicked one to Quinton de Kock off Anrich Nortje’s bowling.

The only other commendable batting effort was delivered by the debutant Wanindu Hasaranga, who smashed 59 off 53 balls, but it still was not enough to save Sri Lanka from an innings defeat. Hasaranga became the second Sri Lankan to score a fifty and pick up a 4-fer in a Test debut after Chamani Seneviratne.

South African fast bowling quartet Nortje, Lungi Ngidi, Wiaan Mulder and Lutho Sipamla shared two wickets a piece as they reduced Sri Lanka to 180/9 to stamp their victory (Dhananjaya de Silva did not bat). Kasun Rajitha and Lahiru Kumara returned for batting in the lost cause, even though they did not bowl due to injuries.

The second Test of the series will commence on 3rd January 2021 at The Wanderers Stadium, Johannesburg. Keep logged in to ThePapare.com for the latest updates, news, photos and videos of Sri Lanka Tour of South Africa.