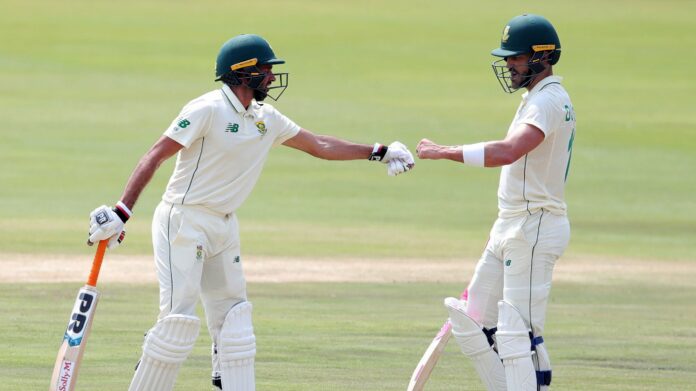 The visiting Sri Lankans had the worst possible day one can imagine at the field on the 3rd day of the first Test match against South Africa at the SuperSport Park Stadium, Centurion.

It was almost seen as a battle between the runs scored by South Africans vs the number of injuries in the Sri Lanka camp, as a few Sri Lankan players were getting injured from time to time. Sri Lanka were already hampered by the injuries to Dhananjaya de Silva and Kasun Rajitha in this Test and were effectively playing with only 9 players.

To make matters worse, Lahiru Kumara picked up a groin injury and went off the field, not being able to return, while Wanindu Hasaranga who bowled the highest number of overs for Sri Lanka was carried off in a buggy. That meant that Sri Lanka had only one front line pacer in Vishwa Fernando and Dasun Shanaka (Kasun Rajitha and Dhananjaya de Siva were already ruled out of the Test) to bowl, so Skipper Dimuth Karunaratne had to turn to Kusal Mendis as well as rely on himself in desperation.

However, Hasaranga returned to the field and managed to pick up 4 wickets, but he seemed to be hobbling from time to time in the field. To cap off the day, Dinesh Chandimal who was batting comfortably, showed some discomfort in his leg and was also carried off in the buggy to the dressing room. However, Mickey Arthur clarified that Chandimal will be able to continue tomorrow.

The cricketing gods did not grant any respite to the visitors as wicket-keeper batsman Niroshan Dickwella was stung by a bee during the play, as if the rest of the team’s injuries were not enough damage already. However, Dickwella continued his wicket keeping duties without any need for rest.

The day started with Faf du Plessis and Temba Bavuma at the crease, with the pair adding 199 runs for the 5th wicket. Du Plessis, the aggressor among them, almost scored a double century but was dismissed on 199, becoming the 2nd South African to be dismissed on that dreaded score after Dean Elgar.

A depleted Sri Lankan attack let the left-arm spinner Keshav Maharaj to achieve his highest career scorer of 73, and the South Africans reached 621 for the loss of 10 wickets, which is the highest team score at the venue.

The Sri Lankan bowling line-up also became the first bowling attack to have 5 bowlers with a part over in the bowling figures in a Test inning after this innings, reflecting the injuries they encountered during the match.

South Africa gained an advantage of a lead of 225 runs after the first innings as Sri Lanka returned to batting, but lost two quick wickets immediately in Skipper Karunaratne and Mendis. Sri Lanka were 64 for 2 at the stumps and will have a mountain to climb if they are to have a favourable result in this encounter, or even to make South Africa bat again. Chandimal and Kusal Perera were at the middle and will resume their batting tomorrow morning as the pair will have a major task ahead, with Sri Lanka being effectively 3 down at the moment. (in the absence of Dhananjaya de Silva)

Keep logged into ThePapare.com for Sri Lanka’s mission tomorrow and for the latest updates, news and photos of this this tour.