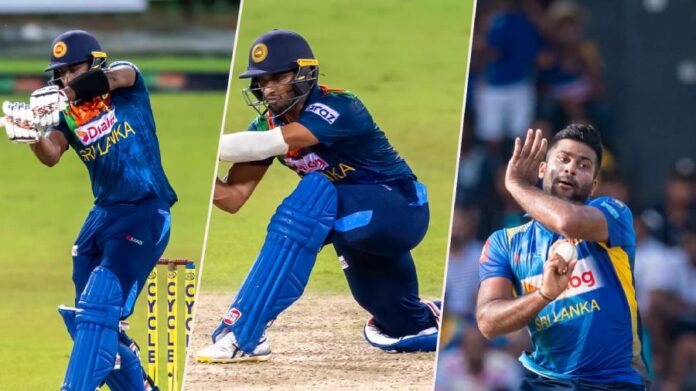 Avishka Fernando, Dasun Shanaka and Lahiru Kumara starred as Sri Lanka registered a 19-run win over Oman in the first T20 to take a 1-0 lead in the 2-match T20 series.

Oman skipper Zeeshan Maqsood won the toss and invited the Sri Lankans to take first lease of the wicket.

The right-handed duo Pathum Nissanka and Dinesh Chandimal opened the batting for the visitors but their partnership lasted only 11 balls as the latter was dismissed for 0. The left-handed Kamindu Mendis was trapped in front in the very next ball putting Sri Lanka under tremendous pressure at 5 for 2.

Sri Lanka’s struggle with the bat in the powerplay continued as they ended the first six overs reeling at 24 for 3. Avishka Fernando and Bhanuka Rajapaksa tried to rebuild the innings with a 30-run partnership for the fourth wicket but it was the Shanaka-Fernando partnership of 111 runs off 56 balls set for the fifth wicket that turned the game in favor of the visitors.

Sri Lankans put on 162 runs for 4 wickets at the end of the allotted 20 overs thanks to the swashbuckling knock of Avishka Fernando who made 83 runs off 59 balls with 3 fours and 5 sixes at a strike rate of 140.68.

Skipper Shanaka gave impetus to the innings at the end, smashing 51 runs off 24 balls with 2 fours and 5 massive sixes at a strike rate of 212.50.

The visitors got off to a strong start with the ball, demolishing the top order of the Oman batting lineup. Nuwan Pradeep and Lahiru Kumara struck twice each in the first 5 overs putting the hosts in trouble at 23 for 4.

Sri Lankan bowlers continued to keep things tight with the ball as the hosts were lagging behind the asking rate all the time.

Wicket-keeper batsman Naseem Kushi tried his best with a came of 40 runs off 20 balls with 2 fours and 4 sixes at the latter part of the innings giving some hope for Oman but the Sri Lankan bowlers managed to hold their nerve in the death overs.

Kumara was the pick of the bowlers for Sri Lanka as he grabbed 4 wickets for 30 runs in his 4-over spell.