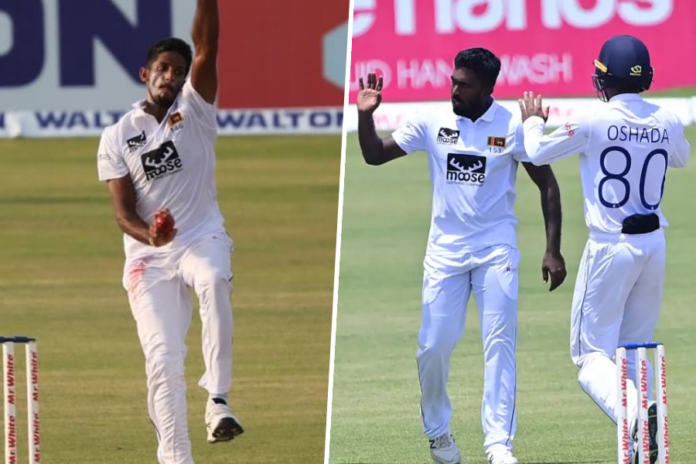 Kasun Rajitha and Asitha Fernando combined to take 7 wickets, restricting the hosts to 465 after centuries from Tamim Iqbal and Mushfiqur Rahim saw them take a 68-run lead over the Sri Lankans.

Sri Lankan pacers and spinners toiled hard throughout the first session but unfortunately not even a single wicket taking chance was created. At Lunch on Day 4, Bangladesh was firmly on top with a scoreline of 385/3,  just 12 runs behind Sri Lanka’s first innings total of 397.

Bangladesh was looking to capitalize on the advantage they received during session 1 but  had a disastrous start to the 2nd session as Kasun Rajtha removed Litton Das and Tamim Iqbal with the first two deliveries of the session. Das edged one to the keeper while chasing a shortish wide delivery while Iqbal, who returned to bat after retiring hurt yesterday, received a peach of a delivery which came in and snuck through the bat-pad gap to  shatter his middle stump.

Shakib Al Hasan survived a close call against Ramesh Mendis as the Sri Lankans went up for a catch taken by Oshadha Fernando at Short Leg. The soft signal by the on-field umpires was not out and there was not enough evidence to overturn the decision.

The short ball tactic by Asitha Fernando finally worked as Shakib Al Hasan top edged one to the keeper giving the quick his 2nd wicket. Nayeem Hasan came in as the next batsman and he was welcomed with a short ball which hit him hard on the chest.

With the heat turned on and close in fielders all around the bat, Mushfiqur Rahim reached his 8th Test Century after facing 270 deliveries. Rahim and Nayeem managed to take Bangladesh safely to Tea without any more damage as the hosts were 436/6.

Sri Lanka began the 3rd and final session with Lasith Embuldeniya and it paid dividends as Rahim who is a prolific sweeper missed one and the ball disturbed his leg stump. Nayeem Hasan was the next man to depart as Kusal Mendis took a simple catch at short leg off a delivery by Dhananjaya which bounced awkwardly.

Taijul Islam was the only Bangladeshi lower order batter to get a double digit score but he also fell to the short ball tactic by Asitha for 20 as he mistimed a hook shot straight to the substitute fielder Chamika Karunaratne at Fine Leg. Shoriful Islam, who got hit by a bouncer a few overs earlier, had to retire out.

Skipper Dimuth had a close call when spinner Nayeem Hasan appealed for a caught and bowled but he escaped after the replays showed the ball touching the ground. The first breakthrough came for Bangladesh in the form of a picture perfect direct hit by Taijul Islam as Oshadha departed for 19.

Lasith Embuldeniya was sent to the middle as the night watchman for Sri Lanka and he managed to survive for 22 deliveries before getting bowled by Taijul Islam to end the day’s play.