Home Aquatics Swimming As the water drains for 2018… 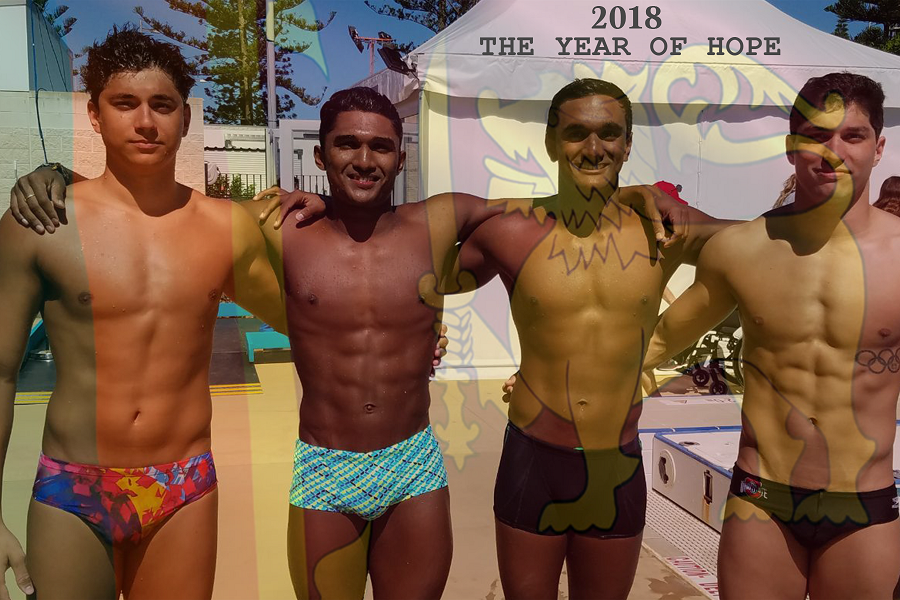 The year 2018 was a renewal of faith for athletes and fans alike. Top countries of the world saw a new face in the name of Sri Lanka and our swimmers gave us something to look forward, as we used to, once upon a time.

However tall their achievements stood in the eyes of the international arena, difficulties too were not too far away. From being stars in important aspects of the sport to missing out on  success in the final stages 2018 had it all.

The swimmers’ tenacity and persistence through it all keeps the hearts of thousands of ardent Lankan fans throbbing for the next generation to step up in the years to come.

>>Visit ThePapare Aquatics to catch up on 2018 in detail<<

Sri Lanka’s top shiner in the new era, 23-year old Matthew Abeysinghe once again stepped up and dove straight into the limelight. Not only did he break a few barriers on his way to individual ascend, he was also a vital member of the Sri Lankan clan which took to Gold Coast for the Commonwealth Games and Jakarta Indonesia for the Asian Games.

Currently studying in Ohio State University with a focus on swimming, Matthew Abeysinghe holds the most number of National Records in the Long and Short Course Individual events; A total of 8.

Participating in the Commonwealth Games, Matthew got more than what he bargained for, Two National Record renewals with a Final qualification in the Team Relay. Matthew became the first athlete to penetrate the 23 second barrier in the 50m Freestyle event. He holds the National Record at 22.65 seconds, presently.

Along with his new NR, he impressed with a semifinal finish in the 50m. There was stiff competition in this event particularly, with Englishman Benjamin Proud establishing a new Games Record at 21.30 seconds. Abeysinghe finished 8th overall with a commendable performance. The swimmer also came up to 49.11 seconds in the 100m Freestyle event renewing his second NR at the Games.

The Men’s 100m Freestyle Relay hasn’t been tried and tested by any Sri Lankan team before in the international stage. This year, at the Gold Coast Commonwealth Games, 4 youngsters took up the challenge and delivered beyond expectation.

Matthew Abyesinghe, Kyle Abeysinghe, Cherantha De Silva and Akalanka Peiris became the first quartet to compete in the 4x100m Freestyle Relay in a world class competition. They advanced beyond the heats and semifinals and made their debut final, turning the heads of thousands back home, towards the pool. Unfortunately, due to an early charge by the last jumper, the team was disqualified from the event.

The team didn’t fret; They composed themselves and took flight to Jakarta, Indonesia a few months later to compete at the Asian Games 2018. With new hope, the four men saw a similar road to the final, as they did in Gold Coast, and swam their first Asian Games Final marking their second milestone in under three months.

This time, an early charge from their second jumper caused them the disqualification in the final.

Akalanka Peiris of St. Peter’s College, took things up a notch at the Youth Olympic Games held in Buenos Aires, Argentina in early October. Not only did he renew his Men’s 50m Backstroke National record, he also finished the event as a top 10 swimmer in the world.

Akalanka’s master class lap during a heat in Argentina was clocked in at 26.33 seconds which bested his previous National record of 26.52 seconds. He reached the semifinal with this timing; unfortunately, the 26.36 second lap in the semis finals fell short of his entry into the Final stage.

However, his timing was sufficient for a 10th place overall finish; the biggest and most important achievement that came from the pool at the 2018 Youth Olympic Games.

Akalanka also set examples of being the perfect student-athlete. Peiris was granted permission to take his Advanced Level examination overseas, during the Asian Games 2018. While most prefer to focus on one or the other, this superstar showed courage and impeccable balance in his career as a student athlete and is now a role model for many to come.

While the swimmers did their share for the country, the veterans of the sport managed to hold their own at the Master’s Games.

Chandrika Gunawardena and Roshith Perera  grabbed 2 Gold medals and Four Silver medals between the two of them at the 1st Asia Pacific Master’s Games in Penang, Malaysia. The two kept the Lankan flag flying high in international waters, and are sure to return for more blood in the years to come.

The year 2018 was a renewal of faith for athletes and fans alike. What will 2019 bring?

Stay with us on ThePapare.com to share the excitement, victories and heartbreak of the young and old next year too.