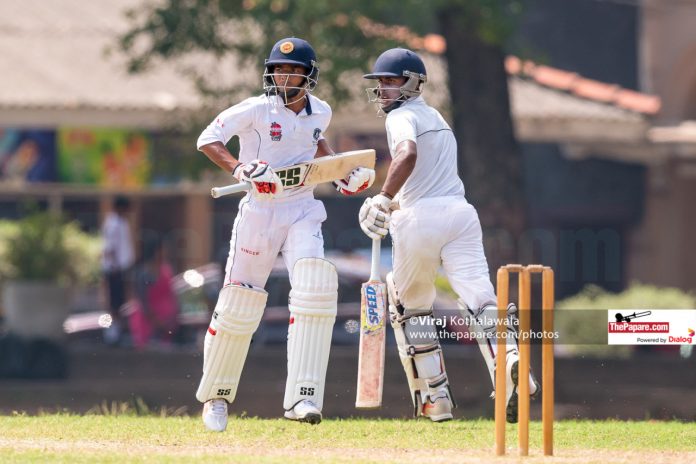 Three games in the second round of the Singer U17 Division 1 Schools Cricket Tournament 2019 were worked off today, 2nd August 2019.

The Josephians decided to take first lease of the strip after winning the toss on a lively Nalanda College surface. The attacking left-hander, Shevon Daniel gave the Josephians a thumping start as he scored 52 runs at the top. But, it was all about the class of Dunith Wellalage from thereon in the game.

Wellalage roasted the Nalanda bowlers in their own backyard as the left-hander recorded a well-knit century. His ton propelled St. Joseph’s College to a comfortable 263 runs for the loss of 9 wickets in their quota of overs.

The 2019/20 season of All Island Schools U19 Division I Cricket Tournament will kick-start in…..

Lumbini College won the toss and elected to bat first in the low-scoring affair. The game was played at Bloomfield grounds, Colombo.

Sri Lanka youth international coloursman Pawan Rathnayaka stole the show easily from the rest of the youngsters. Though Rathnayaka is known as a wicketkeeper batsman in the youth arena, he showcased his skills with the ball in hand. He picked up 3 wickets for 21 runs while Nethula Kenula and Achintha Supun picked up 2 wickets each.

Except for Nethul Rajapakshe’s hard-earned 25 runs there weren’t any notable performances from the Lumbini batsmen. They were wrapped up for 127 runs in 45.1 overs.

It was an easy chase for the boys from Colombo 03. It was Rathnayake again who lead the pack from the front as he remained unbeaten on 74 taking his team over the line in just 26.2 overs. Bawanta Himal and Thashika Nirmal picked 2 wickets each for Lumbini College.

U17 Schools Cricket to commence later this month

The hill country Antonians tasted a massive victory at their home grounds as the Antonians from Wattala fell 185 runs short.

The Kandy school won the toss and opted to put runs on the board. Accordingly, they posted a humongous 331 runs for 9 wickets. Kavindu Shehan was the top-scorer with 85 runs to his name. Asitha Wanninayake (68) and Gihan Ebert (57) both supported with half-centuries each.

Pathum Vihanga and Ranpath Gamage picked up 3 wickets each.

St. Anthony’s College Wattala looked rather lost at the crease as they tumbled for just 146 runs. Only three batsmen crossed the 20-run mark for the Wattala school. Asitha Wanninayake shone with the ball too as he went on to bag 3 wickets for 20 runs. The ace spinner for the Kandy boys, Nimnaka Jayathilaka also picked up 3 wickets for 30 runs.