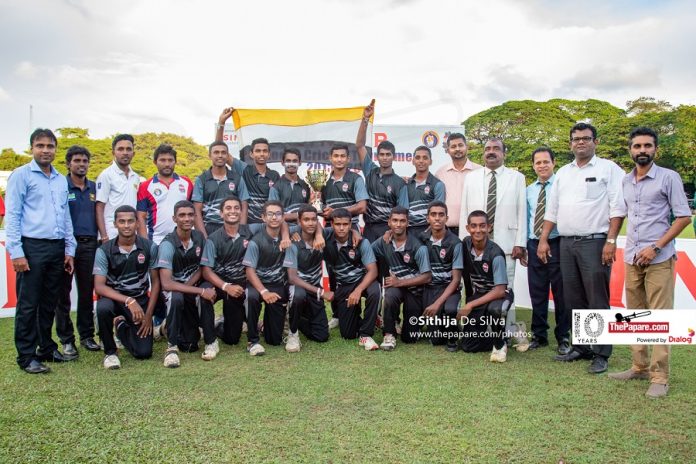 Mahanama College were crowned Singer U17 Division I champions as they beat St. Sebastian’s College by 3 wickets in the final played at the Thurstan College grounds in Colombo today.

Mahanama and St. Sebastian’s reach the U17 final

Mahanama skipper, Sri Lanka youth cap Pavan Rathnayake once again decided to field first after winning the toss, just like in the Semifinal against arch-rivals D.S. Senanayake College, and restricted the boys from Moratuwa to a modest 196.

Captain Sukitha Prasanna top-scored for St. Sebastian’s College with 67 while the 9 wickets they lost were shared among the Mahanama bowlers, who as a pack bowled with discipline. Run-getting was not so easy for the Sebastianites as Mahanama made sure that they had a chaseable target with some tight bowling.

Incidentally, St. Sebastian’s College had also lost the U17 final last year after getting into the final 2 from 74 top cricket playing schools across the country. St. Joseph’s were the champions last year and now will pass on their title to newly crowned champions Mahanama College.

Bangladesh A overcomes Sri Lanka A in thriller

Video – ‘Everyone Performed beyond our imagination’ – Rumesh Ratnayake