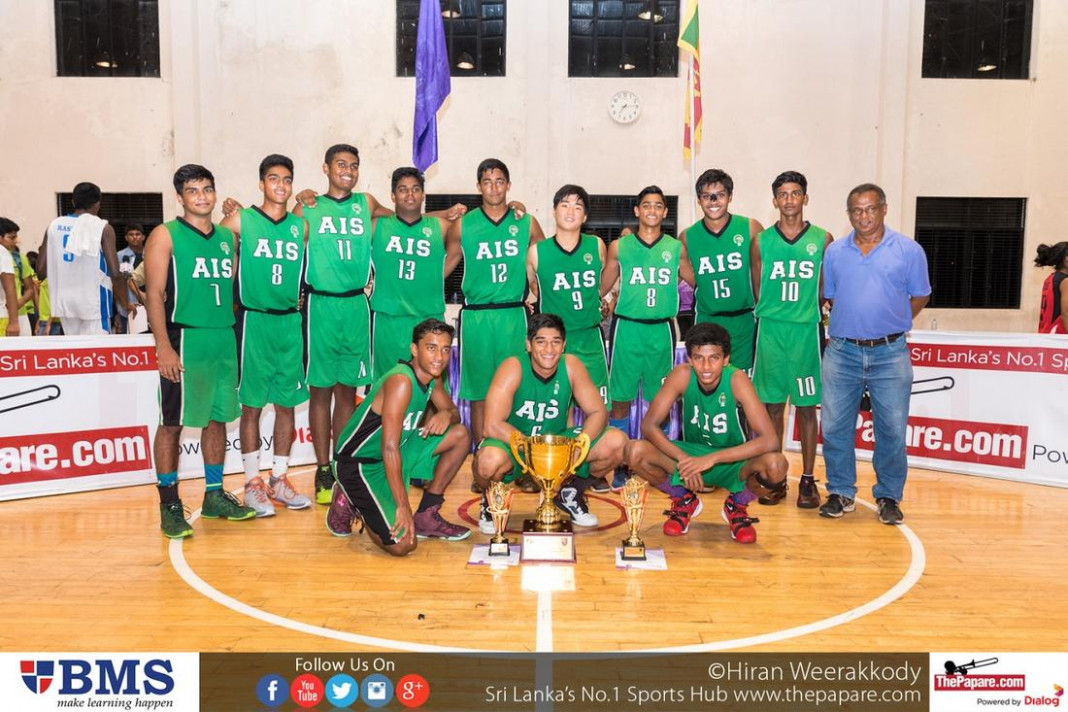 AIS came out strong in the Boys’ final of the Inter-International Basketball Championship, winning against Lyceum Wattala by a large margin giving them their 3rd consecutive title. In what could be described as an incredibly fast paced game, the final scores were 80-61 in favour of AIS.

The game started off with Lyceum getting the ball and converting it successfully with no hesitation but this was soon replied by Arnold Brendt of AIS finishing strong near the rim and taking back control of the game. AIS had opted for a 2:3 zone defense hoping to stop Lyceum from catching up whilst Lyceum employed a full court press half way into the quarter. Both defensive sides played aggressively, not allowing a single player to keep the ball for longer than a couple seconds. Rashan of Lyceum did a great job at collecting rebounds on both sides of the court allowing Lyceum to stay close to AIS as they trailed only by 3 points at the end of the 1st quarter.

The second quarter started off with AIS scoring the first basket and this momentum was continued as they played a good team game passing the ball from player to player and constant support was available when going for a fast-break opportunity. A few fast breaks and a couple of shots from downtown by Damshike Piyasena and Arnold Brendt gave AIS a comfortable lead halfway into the quarter. On the other end of the court Lyceum was struggling to get through the AIS defense but they had a couple opportunities at scoring near the line as AIS found it difficult to keep track of their fouls. However, having missed most of these, Lyceum went into lemons trailing behind by 16 points.

AIS continued to control the game in the third quarter with a few quick passes from under the rim allowing them to get the first shot of the quarter putting Lyceum’s moral down as they were now trailing by more than 20 in the first few minutes of the quarter. Lyceum had changed up their defensive strategies going to a full court press 2 minutes into the quarter to try and reduce the shooting opportunities AIS had. AIS too had switched to a half-court press to stop Lyceum from getting to the ring. AIS skipper Taher finally settled into the game during this quarter scoring 14 out of the 22 points scored in the quarter while Lyceum scored 19 points.

The final 10 minutes of the game witnessed Lyceum scoring first which was followed by 4 more consecutive shots closing the gap between the two teams but the hope of catching up was short lived as they couldn’t keep up with AIS and stop the fast breaks as Arnold did what he does best finishing strong near the rim. Lyceum didn’t give up at any point in the game giving it their very best but the deficit turned out to be too large to cover.

The coach of AIS had this to say to ThePapare after their win: “I think we played a good team game today and all the strategies like our zone offense we practiced worked out during the match and all the players did their part, but I also want to mention that Rashan from Lyceum also played really well and gave us a tough game.”

The coach of Lyceum Wattala shared his thoughts on what went wrong during the match: “We did our best but it wasn’t enough, although there is a good future for this team since they can all play for another 3 years. So their performance at this age is quite acceptable.”