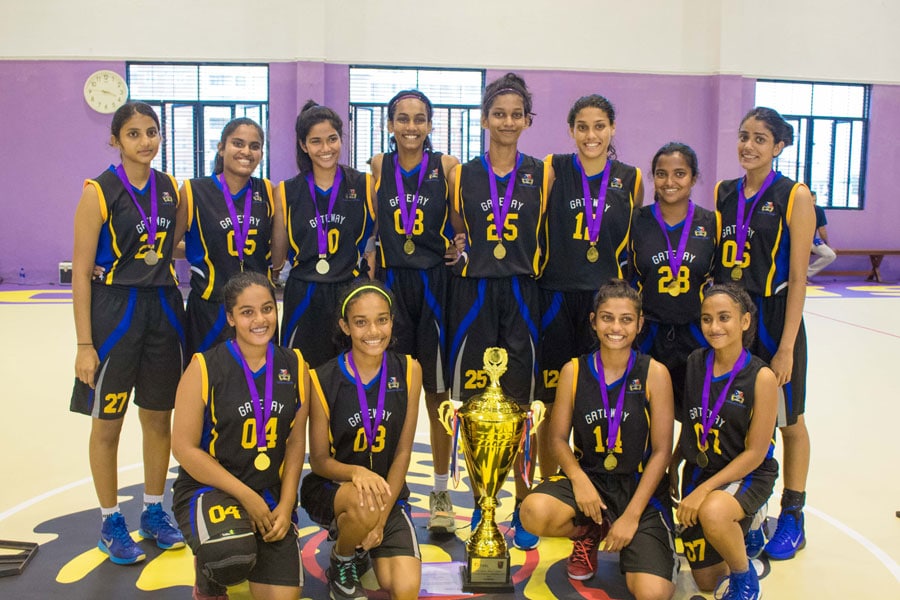 The final girls’ match of the Inter-International tournament was concluded at the British School Indoor Basketball Court yesterday. Gateway College went on to become the new champions of the tournament in a close encounter against the defending champions Lyceum International School – Wattala.

Gateway College started off the game getting first possession of the ball, although after a couple attempts from both teams at scoring, it was LISW who drew first blood scoring a couple free shots. Considering the defensive aspect of the game, Gateway College employed a man to man defense while LISW opted for an equally effective zone defense. The LISW skipper showed off her skills scoring consecutive jump shots keeping her team afloat as they trailed behind Gateway by a point at the end of the first quarter.

During the second quarter of the game, both teams took turns at leading as the game was going right down to the wire. The two teams had a varying offensive approach as LISW scored mostly from jump shots while GCC had a preference to drive in and finish near the rim. GCC turned the tables on LISW in the final few moments of the quarter and a lead of 04 points as they went into lemons.

The Gateway College lead didn’t last for too long though as the struggle for control started yet again in the third quarter with both teams taking turns at leading the scoreboard. Unfortunately for LISW they lost count of their fouls and gave the GCC players a couple opportunities near the line allowing them to draw the score going into the final 10 minutes of the game.

It was a winner take all situation during the final quarter as neither of the teams was giving in and were equally matched both on offense and defense. Both teams focused heavily on their defense since there was no room for any mistakes. Gateway College managed to take a couple consecutive shots and managed to get a 6-point lead which was the biggest lead the game had seen. With the game going right down the wire Gateway was leading by 2 points and Lyceum had an opportunity to take the game to overtime but missed the final shot with 20 seconds to go on the clock and lost the match to gateway by 2 points

The coach of the Gateway College team had this to say to ThePapare.com after their match, “It was a close game and both teams showcased a very tight defense but we marked their strongest players and kept their scoring to a minimum which allowed us to win the game.”