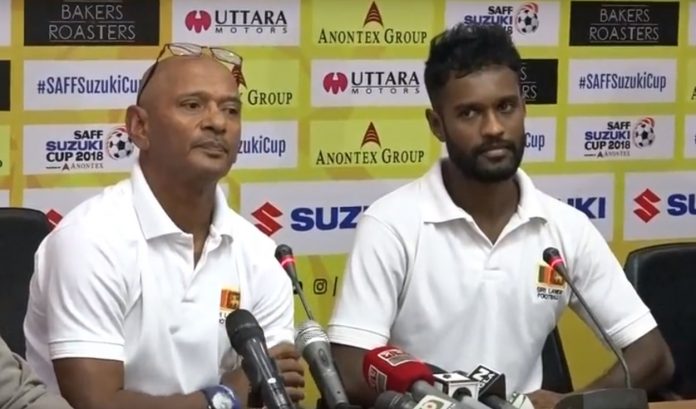 Ahead of the first match against India in the ‘SAFF Suzuki Cup 2018’ in Bangladesh, coach Nizam Packeer Ali and captain Subash Madushan addressed the media.

Sri Lanka came out 1-0 winners against Bangladesh in a close warm-up encounter, ahead of the SAFF Suzuki Cup 2018…

Sri Lanka will be taking on India in their opening Group B game on 5th September, at the Bangabandu National Stadium. The match will kick off at 18:30 Sri Lanka time.

Speaking of Sri Lanka, Head Coach Packeer Ali was optimistic about the chances of the Island nation;

“India and Maldives are strong teams. The game is decided on the pitch, eleven against eleven. We will do our best to go in to the semis.

“We have a blend of seniors and youth in our team. We spent 2 weeks in Japan playing practice matches and another 2 matches in South Korea. This helped the team to prepare. We played one match against Bangladesh and won. We also played against Lithuania at home and drew 0-0 before we flew to Japan.”

Speaking about Sujan Perera who plays for Club Eagles in Maldives, he added;

“He knows their players and it gives us an advantage. He is a very good goal keeper. I also know about Maldives since I was there for two years before taking up the Sri Lanka job.”

“The preparation is good. We played practice matches and the team is physically and psychologically fit.”