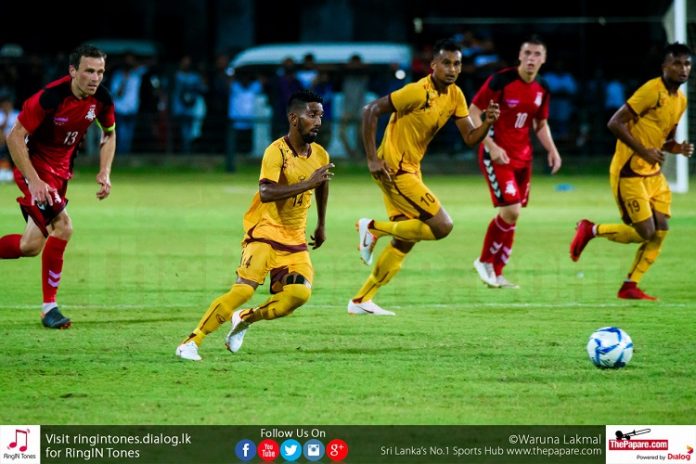 Sri Lanka came out 1-0 winners against Bangladesh in a close warm-up encounter, ahead of the SAFF Suzuki Cup 2018, at the Sheikh Kamal Stadium – Nilphamari, Bangladesh.

Sri Lanka kicked off the first half, yet it was Bangladesh who got the first real opportunity when a cross turned into a chance had to be palmed away for a corner by goalkeeper Sujan Perera. Bangladesh seemed the more dominant side in the opening 10 minutes.

However, out of nowhere Mohamed Fazal scored a 40-yard stunner. He got the ball just inside the opposition half and took an amazing long-range effort which somehow beat the keeper to the back of the net. Fazal was shown a yellow card for taking his shirt off during his celebration.

After conceding Bangladesh were constantly on the attack threatening time and time again, but the Sri Lankan defense held strong. Bangladesh in the 26th minute nearly equalized when their number 10 went for a header from a good cross into the box, but he missed the header by inches and Sujan was able to catch the ball.

Sri Lanka failed to create any significant chances for the remainder of the first half following their opening goal.

Bangladesh started the second half with clear intent of equalizing as they went on the attack from the start. Sujan had to be the hero on numerous occasions pulling off a few vital saves to keep Sri Lanka in the lead.

Bangladesh seemingly had majority of the possession in the second half, with Sri Lanka looking content to sit back and defend their lead and play on the counter-attack.

Towards the end of play the referee played a total of 9 minutes of added time, allowing Bangladesh to take a final corner which was once again saved by Sujan before the goalless half was finally ended.

This win, in their 2nd international game after 2016, will definitely be a morale booster for the Lions who will start their SAFF Suzuki Cup campaign on 5th September.