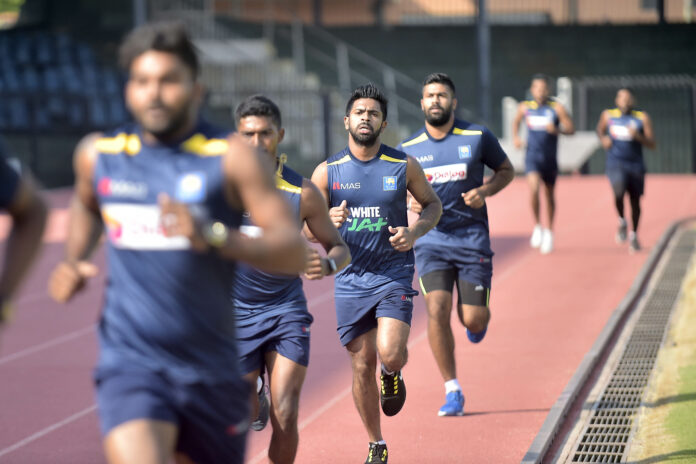 Accordingly, 32 of the players out of a 36-member provisional squad under training for the Tour of West Indies, under discussion, participated in the test, which was conducted at the Sugathadasa Stadium.

The new test, a standard method of determining the ‘Fitness and Endurance’ levels of athletes, is replacing the Yo-Yo method adopted by Sri Lanka Cricket. According to the new test, players were given a target of running the 2 Kilometer distance within a time frame of 8 minutes and 35 seconds.

ThePapare.com reliably learns that four players namely Danushka Gunathilaka, Bhanuka Rajapaksa, Kusal Janith Perera and Dilruwan Perera have failed the fitness test as they could not run 2 Kilometer distance within a time frame of 8 minutes and 35 seconds.

“Going forward, we will adjust the scores as we get better and become world-class. The Bowlers, Batsmen, and the Wicket Keepers will be given different time targets,” said Grant Luden, Physical Performance Manager of Sri Lanka Cricket.

“If a player fails, he can do another test within 40 days, and our idea is to achieve the minimum fitness standards before the T20 world cup, which will be played later this year,’’ added Luden.

Results of the ‘Fitness Test’ will be notified to the Cricket Selection Committee.

The following players did not take part in the ‘Fitness Test,’ owing to the reasons given.