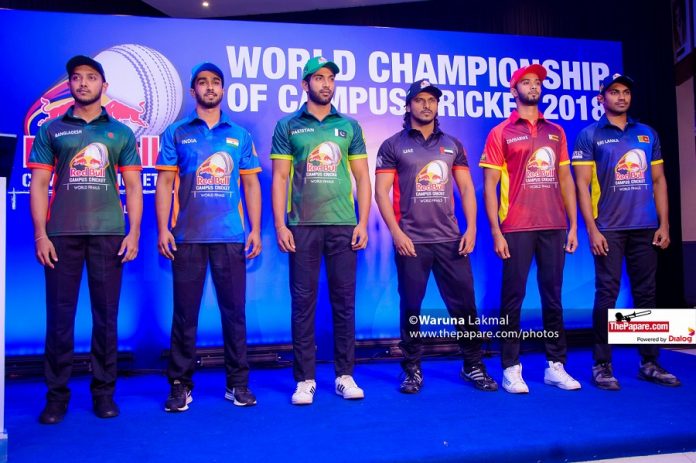 The Red Bull Campus Cricket – World Championship 2018 take place from 23rd to 29th of September at the SSC and NCC grounds, Colombo.

This year’s tournament will be the 6th edition of the Red Bull Campus Cricket World Championship. Six university teams will contest in the tournament representing their countries. All the teams will play against each other on a round-robin basis in the league round, out of which the topper will directly qualify for the final. The second and the third place teams will play a playoff game, and the winner of that game will qualify for the finals.

The first double centurion for Sri Lanka in test match cricket, Mr. Brendon Kuruppu will be the tournament director, while World-cup winner and former ICC match referee, Mr. Roshan Mahanama is roped in as the goodwill ambassador of the tournament.

“Every year we have played this tournament, the quality of competition has increased, and I am sure we will see this trend continue this year,” Kuruppu said. “The Sri Lankan Campus Cricket tournament was especially intense, and this will be doubly true for the World Final. There is nothing like the heat of tough competition to help young cricketers hone their skills, and raise their level of play. That’s the kind of environment the Campus Cricket World Final provides.”

Countries taking part this year are India, Pakistan, Sri Lanka, Bangladesh, Zimbabwe and the UAE. The team from the Business Management School (BMS) will be representing Sri Lanka for the 3rd consecutive year; they have won the championship in the year 2016.

Being a tournament of cricket’s darling format, it not only holds high competitiveness among the teams, but also adds its own essence to the game with its innovative ‘Energizer Over’. An over of excitement, in which every run is doubled, while a wicket adds 5 runs to the opposition’s total.

The tournament has seen some big names in the past; Niroshan Dickwella, K L Rahul, Lungi Ngidi and Chirag Suri have represented their colleges over the years. It is an exciting platform for the youngsters who struggle to gain exposure to cricket along with higher studies. The above names bare witness to that.

The playoff and the final will be played at SSC grounds, and will be telecasted live and exclusively by ThePapare.com/Dialog MyTV on the 28th and 29th of September.