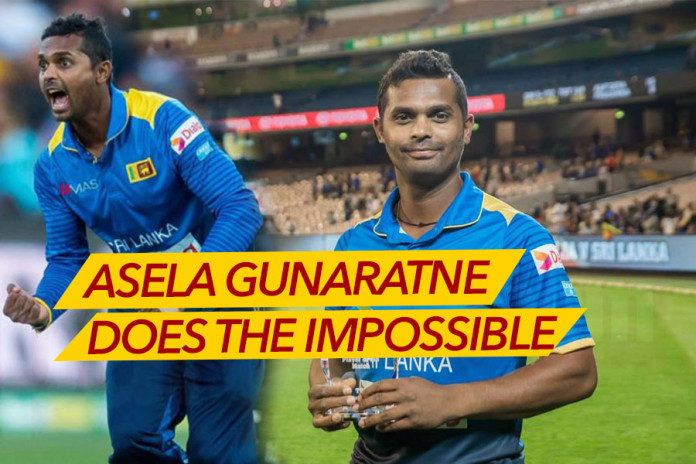 Needing 36 runs off 12 deliveries after Sri Lanka landed themselves in a devastating 138/7, lone-warrior Asela Gunarathne smashed a 46 ball 84 runs to take the lions to a breathtaking victory at the Geelong Stadium.

When everything was not going Sri Lanka’s way with a parade of dismissals in the top order, it was the 31-year-old playing his only 6th T20 international who resurrected the hopes to bring home victory and the series in the final ball of the match.

Social Media was a buzz as the Sri Lankan fans who were having literal heart-attacks went on to celebrate another unbelievablewin in Melbourne.

From the commentary box, it was Russell Arnold who kept the Lankan hope going strong and believing in a win.  He had every right to celebrate after his wish came true.

What a win!!! Asela.. yakek ne !!! #AUSvSL This team is getting better..Well done fellows !! What a joy it was to watch that chase ..Ela Ela

Sri Lanka’s cricketing legend, Kumar Sangakkara rated this match to be the best he has ever witnessed!

The best t20 ever played by Sri Lanka. What a win. Take a bow Asela. Probably the best knock under pressure. So proud. — Kumar Sangakkara (@KumarSanga2) February 19, 2017

Mahela was full of praise for Gunarathne

That was a lovely way to spend a Sunday morning ….. The Aussies being Walloped …. #AusvSL #Gunaratne is my new hero ….

While people were celebrating, some of the fans dropped hints on the IPL Auction that is set to happen tomorrow.

Sri Lanka knocked out of Nidahas Trophy in heart-stopper

It’s always good to leave when you’re right at the top...