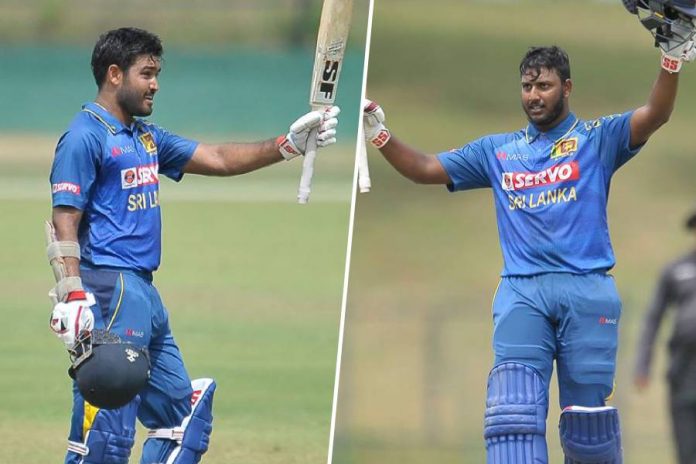 The Sri Lanka ‘A’ team led by Upul Tharanga beat a fighting Ireland ‘A’ team comprehensively by 60 runs to go 1-0 up in the 5-match Unofficial ODI series today at the Mahinda Rajapaksha International Cricket Stadium in Hambantota.

Sri Lanka were inserted to bat first on the Sooriyawewa batting paradise by Irish skipper Harry Tector, who won the toss. Interestingly Angelo Perera and Minod Bhanuka, two players who were not named in the initial 16-man squad, featured in today’s playing XI for Sri Lanka ‘A’.

Read : Priyanjan and Tharanga to lead Sri Lanka ‘A’

The hosts got off to a flying start as skipper Upul Tharanga and Avishka Fernando scored 161 runs for the opening wicket stand in 27 overs. National discard Upul Tharanga scored 66 runs in 78 deliveries before he was dismissed by all-rounder Stuart Thompson, the only player in this Irish XI from the Irish Test team which played against Pakistan last year.

Avishka Fernando was then joined by another national discard in Vice-Captain Milinda Siriwardena. The duo added 91 runs in just 11.5 overs accelerating the scoring rate. Avishka, who played his only ODI back in 2016 as an 18-year old, announced himself with a brilliant century which included 5 sixes. His entertaining innings came to an end courtesy Peter Chase.

Following Avishka’s dismissal Siriwardena was running out of partners at regular intervals despite his fireworks. All-rounders Angelo Perera, Kamindu Mendis and Shehan Jayasuriya were dismissed for low scores of 8,9 & 10 respectively during the last 10 overs.

All-rounder Siriwardena, who was on 47 when the 41st over started, ended on 111 in just 75 deliveries by the end of Sri Lanka’s innings as he steered Sri Lanka from 254/2 in the 40th over to 365/5 in the 50th over. He was also assisted by Jeevan Mendis, who is also an all-rounder, with 16 runs in 7 deliveries towards the end. Both Siriwardena and Mendis walked away unbeaten on 111 and 16 respectively as Sri Lanka ended their allotted 50 overs 365/5.

Shannon was the next man to go as the man with the golden arm, Milinda Siriwardena broke the partnership. Tucker, not giving up the chase paired up with skipper Tector and added 87 more runs for the 4th wicket. Tucker reached his maiden list A century during the cause before a double strike which dismissed both the set batsmen and jolted the Irish run chase. First ambidextrous Kamindu Mendis dismissed Tector and in the very next over fast bowler Ishan Jayaratne got rid of the centurion.

All-rounder Shane Getkate provided the Irish with some glimpse of hope with a 31-ball cameo off 37 runs. Isuru Udana proved too much for him as he bowled the right-hander leaving all doors shut for Ireland.

The Irish were all-out for an impressive 305 runs in 48.2 overs. Ishan Jayaratne ended as the highest wicket taker for the hosts with 3 wickets including the last couple of wickets in the match. Asitha Fernando and Isuru Udana shared 4 wickets equally among them while Jeewan Mendis, Kamindu Mendis and Milinda Siriwardena contributed with 1 wicket each.

The two teams will meet in the 2nd Unofficial ODI on the 21st Monday at the same venue following this high scoring affair.

Video – We have fast-bowlers to exploit the ‘Gabba’ bounce –...