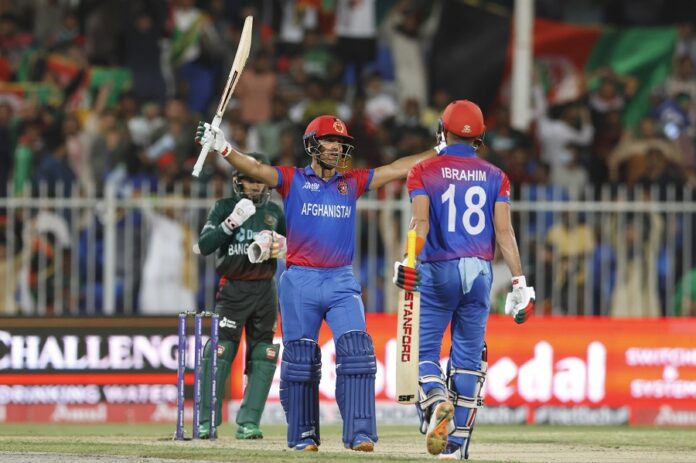 Afghanistan sealed their spot in the Super Four stage of the 2022 Asia Cup following another impressive show that saw them defeat Bangladesh by 7 wickets in Sharjah.

Despite a poor batting effort, Bangladesh appeared to have taken control of the game during the Afghanistan chase. However, Najibullah Zadran stunned the bowling side right at the death as he went on a six-hitting spree to seal the deal for Afghanistan.

Afghanistan sizzle in the powerplay again

It was Fazalhaq Farooqi who did the damage in the powerplay against Sri Lanka but against Bangladesh, the spinners ruled the roost. The decision to give Mujeeb ur Rahman the new ball paid dividends as he struck once in all three overs he bowled in the powerplay. Mohammad Naim didn’t read the carrom ball and lost his stumps whereas Anamul Haque was trapped lbw that ended his miserable stay that saw him score just 5 off 14. The key wicket of Shakib Al Hasan followed immediately as he too failed to connect and lost his stumps to leave Bangladesh struggling at 25/3. More misery was in store as Rashid Khan also got into the act and struck in his first over as a googly saw the downfall of Mushfiqur Rahim. At the halfway stage, Bangladesh managed only 50 runs on the board.

How did they recover then?

Mahmudullah stemmed the flow of wickets at one end and Afif Hossain hung in for a while. But once the left-hander perished to Rashid, the onus was on Mosaddek Hossain to guide Bangladesh to a respectable total. Even though he lost Mahmudullah in the 16th over, Mosaddek fetched some useful boundaries to drag Bangladesh past the 120 mark to give the bowlers something to bowl at.

How did the Afghanistan openers fare this time?

The start was completely in contrast to the one they made against Sri Lanka. Rahmanullah Gurbaz raced to 40 off just 18 that night but this time, he could manage just 11 runs off the same amount of deliveries. Shakib Al Hasan, playing his 100th T20I, opened the bowling and got rid of Gurbaz to give Bangladesh some hope. And they capitalised on it big time as the runs were stifled. The spinners were doing all the damage by not giving away freebies to Hazratullah Zazai and Ibrahim Zadran was content taking the chase deep. And with Bangladesh removing Zazai and Mohammad Nabi in succession, Afghanistan were on the verge of going down. They needed 66 from the final 7 after fetching only 62 from the first 13.

A couple of timely boundaries from Ibrahim Zadran brought the equation down to 52 from the final five overs which is when Najibullah took over. For the first 35 overs of the contest, only one six was hit. But Najibullah then added six more hits over the fence in the next four overs as he stunned the Bangladesh section of the crowed with his clean hitting. Mustafizur was clobbered for a couple of sixes and Saifuddin suffered the same fate in the following over as the pacers undid the spinners’ good work. The 22-run 18th over pretty much ended the contest as Afghanistan needed only 4 more from the final two overs with Najibullah clearing the ropes one more time to guide his side to the next round.