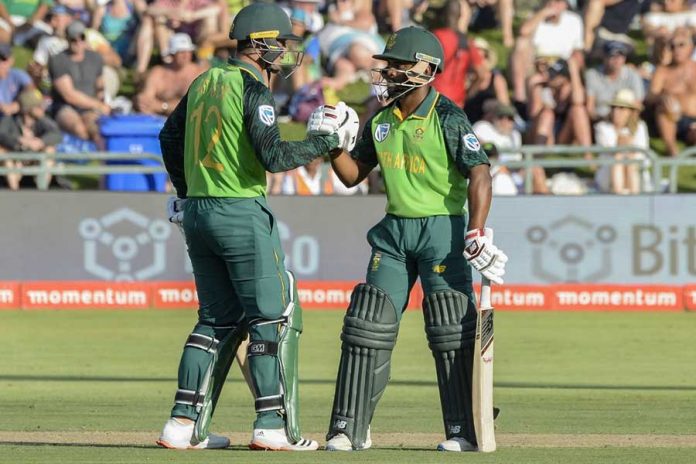 Playing their first ODI since winning the 2019 ICC Men’s Cricket World Cup, England suffered a seven-wicket loss at the hands of South Africa at Newlands.

The occasion was particularly special for de Kock, who was appointed South Africa’s ODI captain prior to the series. He led from the front with a typically fluent knock, passing 5,000 ODI runs on his way to his 15th ODI century.

At the other end was the impressive Temba Bavuma, playing his first ODI since 2017. While de Kock’s boundary-striking was his main quality, Bavuma’s running between the wickets impressed, with five fours and two sixes in his 103-ball stay.

Unfortunately for the 29-year-old, he fell two runs short of a second ODI century as Chris Jordan skidded a ball through to trap him on his crease.

Earlier in the piece, Joe Denly’s first ODI half-century since 2009 anchored England’s total. Jason Roy and Jonny Bairstow had threatened to put on one of their typically bulldozing opening stands, but the dismissal of Roy for 32 prompted a mini-collapse.

From 51/0 England crumbled to 83/4, with the 16th over, bowled by Tabraiz Shamsi, containing two wickets. A bullet throw from van der Dussen ran out Joe Root and Shamsi – who finished with impressive figures of 3/38 – was off celebrating after Eoin Morgan edged to Bavuma at slip.

Tom Banton’s ODI debut resulted in a knock of 18, with Shamsi trapping him lbw, and Sam Curran followed not long after for 7. In Chris Woakes – playing his 100th ODI – Denly found the right partner, and the pair put on 89. In the end, however, their fighting stand proved to be in vain as South Africa cruised to a comfortable win.