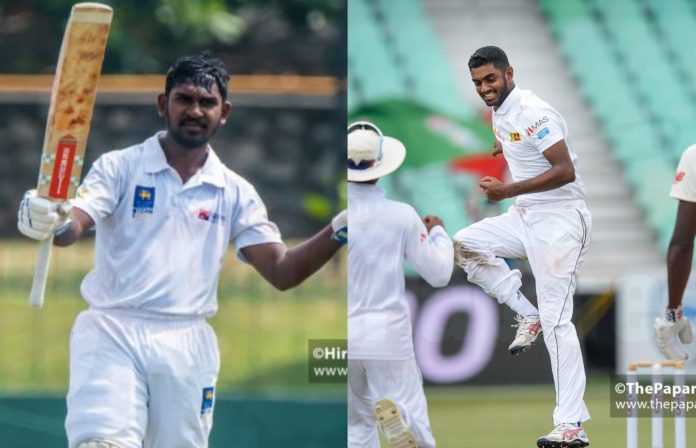 Sri Lanka Emerging ended their tour to South Africa with a 1-0 series defeat as the 2nd unofficial Test ended in a draw at Pretoria on Sunday, 28th July 2019.

After posting an intimidating 441 run on the board for the first innings, the hosts restricted the Lankans to 388 runs. It was a decent fight back from the visitors but a long stay in the middle awaited in the 2nd innings.

The Proteas started the day with an overnight score of 92 for the loss of a solitary wicket. Mr. Reliable, Janneman Malan was at the crease with his skipper Raynard van Tonder. Van Tonder who smacked a cracking ton in the first-innings, found himself dismissed for 31 runs by the left-arm spin of Lasith Embuldeniya.

Malan joined Jason Smith at the centre to keep the Lankan bowlers in thirst for wickets for a good 20 overs. They accumulated 56 runs together during that period.

Following Malan’s dismissal, the intentions of the hosts became quite clear. It was all about batting time. They were quite happy with a tame draw, rather than going for a hustling win.

Mathew Breetzke was the next man in. Both he and Smith batted with visible patience and it started to worry the visitors, having done quite a lot of bowling throughout this game.

Smith scored a 158-minute 62 runs with 3 boundaries and 3 sixes before being caught behind to a Pramod Maduwantha delivery.

>>Proteas ahead on day 1 of 2nd unofficial Test<<

The right-arm off-spinner got rid of the new batsman Sinethemba Qeshile too in quick succession.

Yet, the game seemed quite far away from the visitors’ reach. South Africa had already put over 300 runs between them. Hence, the game was brought to a close with South Africa at 260 for 5 in 90 overs. Breetzke was unbeaten on 38 in 89 deliveries.

The left-arm magician, Lasith Embuldeniya, who is in the form of his life, wrapped up a match-bag of 10 wickets in a game where 1089 runs were scored. That makes it his second consecutive 10 wicket-haul on tour and 3rd successful outing in South Africa, following his exploits with the national team not too long ago.

Pramod Maduwantha also picked up a couple of wickets to make his presence even more valuable, following his fighting ton with the bat.

South Africa Emerging won the Test series 1-0 while Sri Lanka Emerging will fly back after some satisfying performances throughout the tour.