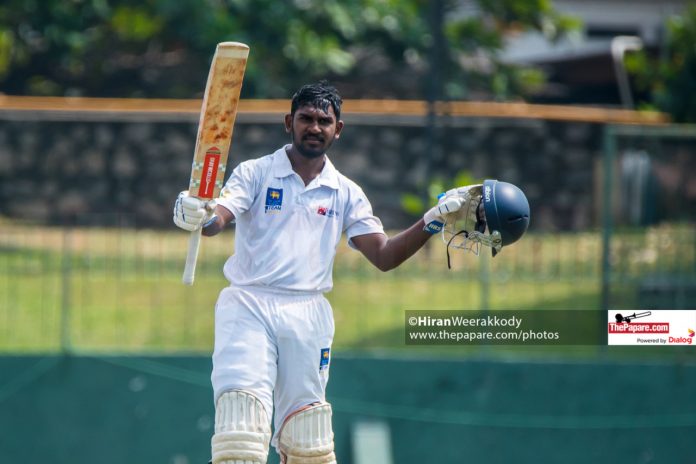 Maduwantha who was on 47 at the start of play on day three, got into the rhythm very soon. The youngster had an even younger partner in Kalana Perera on the other end. Kalana did not last long at the crease as he edged one into the palms of Jason Smith who was at 2nd slip.

Sri Lanka were 191 runs behind of what the hosts scored in their first-innings when the all-rounder Chamika Karunaratne joined Maduwantha. The pair looked in complete control as they posted an 83-run partnership to ease the nerves of the Sri Lankan bench.

Left-handed Maduwantha has been a consistent performer in the domestic circuit since his debut in 2016. The 22-year-old averages a brilliant 51.11 in first-class games. He scored a patient century, showing all his stability and class. He scored 111 runs in 236 balls with only 9 boundaries in his innings.

Karunaratne gave him a superb hand while taking himself to a valuable half-century. He departed with 53 runs to his name and it only took 2 more overs for the Proteas to uproot the rest of the Lankan batsmen. Lankans ended their innings at 388 runs.

Marco Jansen was the pick of the bowling for South Africa. The left-arm seamer picked up a fifer giving away 69 runs in his 19.5 overs. He was very well supported by the son of a legend, Thando Ntini. Ntini claimed 4 scalps to his name.

The South Africans had a 120-minut,  long stay at the crease in their second outing. The two openers, Janneman Malan and Wandile Makwetu managed to record a 46-run opening stand. Makwetu was trapped in front by Embuldeniya for 26 runs. The star of the game so far, skipper Raynard van Tonder who came in next remained on the crease with Malan by the close of play with 20 and 36 runs respectively.

South Africa Emerging were on 92 for 1 by the end of day-three. The game will resume tomorrow for its fourth and final day of play. That will then be a wrap for the Lankans in South Africa. The home team is currently ahead of the visitors in the two-match series, following their win in the first unofficial Test.