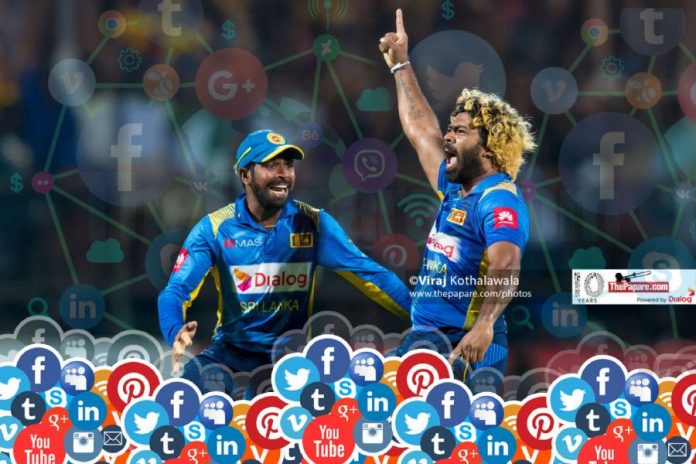 This heroic effort which included his 2nd T20I hat-trick and his second ‘double hat-trick’ in international cricket, helped Sri Lanka avoid a series whitewash as they finished the 3-match series 2-1.

Read More : Malinga lights up Pallekele with another 4 in 4

The cricketing fraternity on social media were more interested in the Ashes test and had less attention on the T20I which New Zealand were pretty much certain to win after restricting Sri Lanka to a below par score of 125.

However, as Malinga reached 100 T20I wickets with the wicket of Colin Munro, becoming the first ever to achieve the feat, the buzz about the game in Kandy started to trend on social media.

In no time since setting that record, Malinga, now the only man to complete 100 wickets in all 3 formats of the game, set social media on fire repeating his 4-in-4 after 12 years. The amazed cricket community started to share their thoughts on social media from which we’ve picked some to share with you.

The best out of all was from the Blackcaps official Twitter account, asking for help after they were bamboozled by 4 pin-point Malinga toe-crushers

Here are a few more tweets,

The first four-in-four (in 2007) that Malinga got was with reverse swing with the old ball, moving into the right-hander mainly.

This one was conventional swing, new ball, moving away from the right-hander.

A lot of late swing. A crazy amount of skill.

The great #LasithMalinga. Still has it. 4 in 4 again! May he just keep playing…..

..WWWW! Another 4 in 4 for the legend, Lasith Malinga! What a bowler! #Legend #KingOfYokers @Lasith99Malinga @ICC @OfficialSLC

Saw something very special today in Pallekele #Slvnz Lasith Malinga .. what a champion !!! 4 in 4 again

Shall never forget the spell of commentary I did describing Lasith Malinga’s 4 in 4. It was a truly special moment in a commentators life.

Players in the caliber of @Lasith99Malinga are a rarity in the game of cricket. Congratulations Lasith, you’re a game changer. #SLvNZ pic.twitter.com/mAavBiW912

What a magnificent performance by @OfficialSLC and hats off Mali aiya on brilliant performance! @Lasith99Malinga
Congratulations team on the win! #LionsRoar #SLvNZ

What performance by @Lasith99Malinga and @OfficialSLC fantastic effort guys. Congratulations.????

Malinga also didn’t forget to do this,