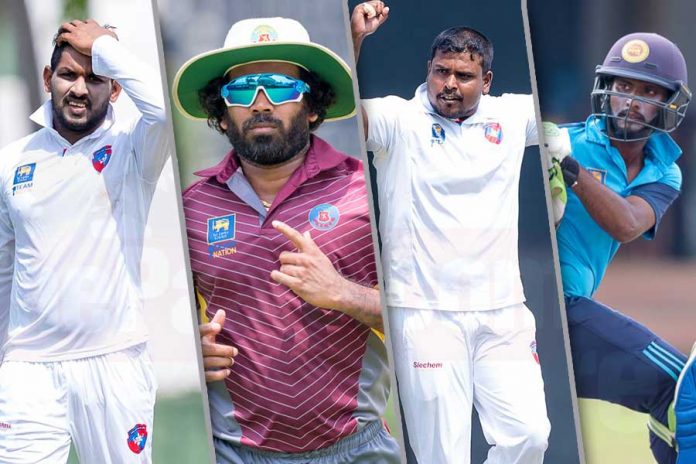 The Sri Lanka Cricket (SLC) 2017/18 domestic tournament concluded on Sunday (25th March) when SSC beat their arch-rivals NCC in the Limited Overs grand finale. We take a look back at the top performers in all three formats, the surprise packages during the season, the top players who didn’t live up to expectations and the teams who were promoted and relegated from tier ‘A’ and ‘B’.

The stars with red and pink

The group stage of the SLC Major League tier ‘A’ Tournament was played in red ball cricket, before the super eight stage saw the introduction of pink balls in order to get players used to the fast growing day-night Test concept played with a pink ball.

It’s not very often that a player who has never represented Sri Lanka tops batting charts in the country’s premier tournament, but that was the case in the concluded season with Chilaw Marians star all-rounder Sachithra Serasinghe making a staggering 901 runs, inclusive of 3 centuries and 6 half centuries, not forgetting his 35 scalps with his right arm off spin.

Malinda Pushpakumara, the Chilaw Marians skipper, who has been topping bowling charts for a number of years, was back in business as he picked up 70 wickets in Chilaw Marians’ title winning campaign. This time around though he got good competition from another left arm spinner, Chanaka Komasaru (Ports Authority) who ended with 69 scalps, but the most sensational find of the season with the ball was NCC’s left arm tweaker and former Royalist, Lasith Embuldeniya. It was brilliant to watch him use his guile and experience to good effect as he captured 63 wickets, inclusive of 3 ten wicket hauls and 7 five wicket hauls while also having the best strike rate(30.8) among the top wicket takers.

Shehan Jayasuriya was by far the best all-rounder in the longer format picking up over 50 wickets and making 740 runs in just 8 games compared to most players who had 10 games during the season.

Another rare occurrence was witnessed in the tier ‘B’ segment of the tournament when Pakistani born Kashif Naved took the tournament by storm with his outstanding batsmanship as he topped the batting charts with 805 runs representing Panadura SC. Gayan Sirisoma captured over 90 scalps last season and was by far the top bowler in the tier ‘B’ but he was struggling for form for most parts of the 2017/18 season before capturing 11 wickets in the final game he played to dramatically top bowling charts once again and end with 55 wickets.

Former Peterite Lahiru Milantha’s return to form was a welcome sight for the Ragama CC outfit as he hit 4 half centuries and a century in just six innings during the SLC Major Limited Over Tournament. He made 448 runs at an average of just under 75 while also maintaining an impressive strike rate of over 100.

Stylish left hander Ruvindu Gunasekara was impressive to watch during the shortest format of the game as he made 272 runs in five outings while he went past the 50-run mark on four occasions. He was dismissed only twice in the competition and had a more than impressive average of 136 while he excelled with the ball too with his leg spin.

It was the ever consistent Lasith ‘slinga’ Malinga though who was the king with the ball during the T20 competition. He was miserly with his opening spells and death bowling right throughout the tournament which also laid the foundation for NCC to go on and win the title. He picked up 17 wickets with an economy rate of just 6.61 and was making a strong case for selection for the latter part of the Nidahas Trophy where Sri Lanka did not even qualify for the final with death bowling seeming to be the major cause. Sri Lanka cap Chathuranga De Silva also captured 17 wickets during the tournament as the duo were impressive for NCC at crucial stages of the tournament.

A comeback for Sachithra Senanayake seems to be quite distant with Akila Dananjaya establishing himself as the top off spinner in the country but the veteran Senanayake continues to impress at the domestic level. He was the top wicket taker in the SLC Major Limited Over Tournament with 17 scalps to go along with an outrageous economy rate of just 3.15 and led SSC to their only title of the 2017/18 domestic campaign.

Udara Jayasundara was playing Test cricket for Sri Lanka in New Zealand not too long ago. He has faded away dramatically ever since and had another horror season with just 426 runs at an average of 23.66 inclusive of four ducks.

Ron Chandraguptha seemed to be a star in the making last season when he was among the top run getters in the tournament. This time around though his fortunes changed dramatically as he made just 395 runs in 9 matches and will be desperate to find form sooner rather than later.

The rather unfortunate Dhammika Prasad who was once one of the leading Test bowlers in the world, seemed to lack the X factor in him after his comeback season from injury. At least for the time being his comeback seems a long way off and he didn’t help his cause with just 10 wickets in five first class matches though he impressed with hostile spells at times during the season.

Revelations of the season

Sri Lanka Ports Authority, who played in the tier B segment last season, finished third behind Chilaw Marians and SSC in the tier A segment and it was Nick Compton, the former English opener who laid a solid platform for Ports Authority at the top of the order more often than not with a century and 4 half centuries against his name.

Sebastianite Oshada Fernando was struggling to find a place in the  playing XI last season but this time around he made the switch from SSC to Chilaw Marians and it proved to be very useful as he made 817 runs inclusive of 3 centuries and 3 half centuries and was the second highest run getter in the competition.

Former Nalandian Adeesha Nanayakkara was a sensation for Bloomfield during the Limited Over phase but he couldn’t carry them to the knockout stage in a virtual quarterfinal after he made an outstanding century, his second against Tamil Union. He made 320 runs at an average of 80 in just 4 matches while also having an impressive strike rate of just under a 100.

If you looked at the list for top batsman, top bowler and top all-rounder, you will find one thing in common; they were all players from Chilaw Marians and were the reason why they went on to win the league title against some strong contenders such as SSC, NCC and even CCC, who did not live up to expectations and were seen fighting for survival in the plate championship towards the latter stages of the season. But it was Bloomfield Cricket and Athletic Club who eventually were relegated from the top tier as they failed to record a single win, playing in the plate championship.

The tier ‘B’ segment was a seesaw battle from the word go and it was hard to predict who would go on to win the title and gain promotion with almost five teams entering the final week with a chance for promotion. It was finally Negombo CC who won the battle after gaining promotion to the tier ‘B’ only a couple of seasons back, while Police SC went downhill after a good start to the season to sit at the bottom of the table at the conclusion of the season.

Meanwhile the SLC Major T20 tournament saw NCC coming out on top after a keenly fought final against CCC, before NCC were at the receiving end when it came to the SLC Major Limited Over final at the hands of a dominant SSC unit.