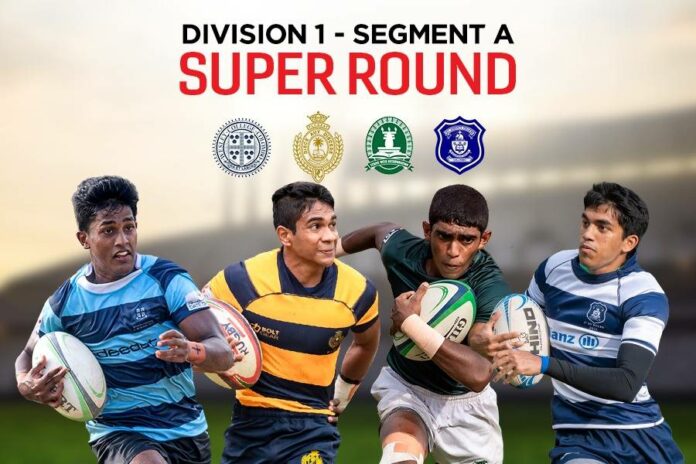 After six weeks of grueling Dialog Schools Rugby League 2022 – Division 1: Segment ‘A’ action, it all comes down to four Super Round matches which will determine the League champions this year.

Isipathana College won all five of their group matches to book their place in the Super Round from group 2A with 27 total points, followed by Wesley College, who ended in the second position in the group with 21 points.

In the other group – 1A, Royal College, and St. Joseph’s College have won four matches out of five games, and advanced to the Super Round with 23 points each.

In the Super Round, each team will play two games against the teams who advanced from the other group. The first round points will be carried forward, therefore all four matches in the Super Round will be crucial to decide the league winner.

The team with the most points at the end of the Super Round will be crowned the League champions. One team will get five points for a win and if they score four or more tries, then they will get six points from a game, which is the maximum number of points a match winner could get.

With all four teams having a chance of winning the league, we look at what they need to do to be crowned Dialog Schools Rugby League – Division 1: Segment A champions.

It’s a pretty straightforward equation for the only unbeaten team in the league, Isipathana College. They just need two wins from both their games against St. Joseph’s and Royal to be crowned champions. They don’t even need a bonus point, wins will be sufficient to give them the title.

The perfect scenario for Royal would be to win both their Super Round fixtures with a bonus point. In that case, neither Isipathana nor St. Joseph’s can topple Royal from the pole position even if they end up on equal points of 35 because, by then, Royal would have beaten Isipathana and St. Joseph’s (from the first round).

St. Joseph’s will need to win both their games against Isipathana and Wesley if they’re to win their maiden league title. Preferably, they would want to win with maximum points and, they would want the help of Wesley and Isipathana. Even if Wesley and Isipathana lose against Royal, they will hope the reigning champions do not get any bonus points. Because of their loss to Royal in the first round, St. Joseph’s cannot afford to end up on equal points with the Royalists.

If St. Joseph’s beat Isipathana and Wesley without any bonus points, but concede a losing bonus point, especially to Isipathana, they could still come second in the points table as Isipathana can still overtake them with a bonus point win over Royal next week.

The Double Blues, Wesley College has the toughest challenge out of the four teams to win the league. They cannot afford to lose or draw any of their games against Royal and St. Joseph’s. If they lose against Royal on the 6th of August, then they’re technically out of the title race.

Due to their 17-all draw against St. Peter’s in the first round, Wesley have only 21 points to their name and will also want both St. Joseph’s and Royal to beat Isipathana to make sure that none of the teams reach 30+ points at the end of the Super Round.

If Isipathana manages to win one game and lose the other, Wesley’s chances are gone even if they end up winning both their matches with maximum points because, if Isipathana secures a bonus point, then they could end up with 33 points which will be the maximum Wesley can reach. Due to the head-to-head record, Isipathana will be crowned league champions if they end up on equal points.

There are a lot of IFs and BUTs, however, some scintillating rugby action can be expected in the Super Round of the Dialog Schools Rugby League, Division 1 – Segment A. All four Super Round Matches can be watched live on Sri Lanka’s number one sports hub – ThePapare.com and on Dialog Television.