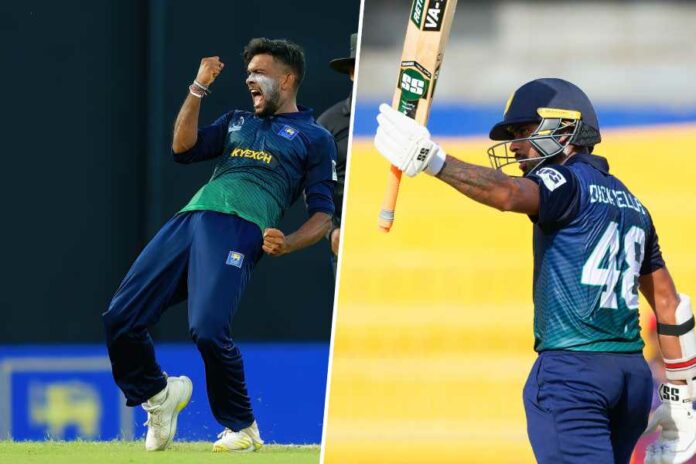 Having won the toss, SLC Greens skipper Dasun Shanaka opted to bat first. Niroshan Dickwella and Pathum Nissanka opened the innings for Greens but the latter couldn’t stay at the crease for long as he was bowled by off-spinner Sahan Arachchige for just 10 runs.

While wickets kept falling at one end, the opening batter Dickwella came out with a special inning for Greens as he top scored for them scoring unbeaten 76 runs off 56 balls with 8 fours at a strike rate of 135.71.

The speedster Asitha Fernando once again stood out with the ball for Reds picking up 2 wickets for 32 runs. Chasing 162 runs to win, SLC Reds got off to a solid start as their opening pair Lasith Croospulle (31) and Kusal Mendis (30) built another excellent stand for the opening wicket.

The duo added 61 runs off 53 balls setting a nice foundation for the Reds. However, with their dismissals in quick succession, SLC Reds were pushed onto the back foot. The left-handed duo Bhanuka Rajapaksa (34) and Kamindu Mendis (24) built a half-century stand for the 3rd wicket but it wasn’t enough for the Reds to cross over the line as Greens snatched an 8-run win at the end tasting their first win of the tournament.