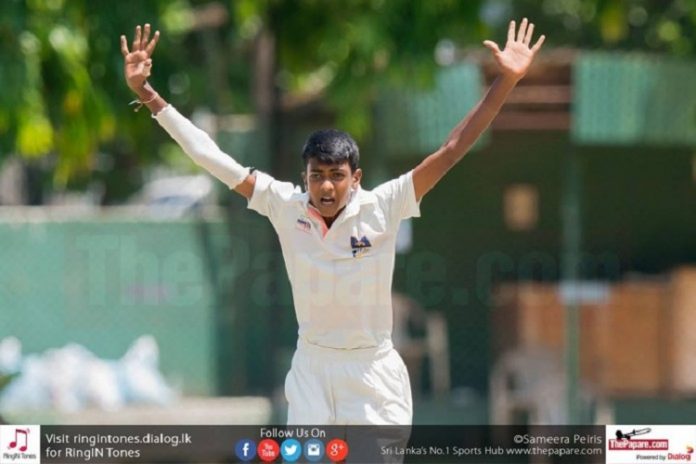 10 games were scheduled to be played today in Sri Lanka’s premier U23 Club Cricket tournament, but 6 of them were called off without a toss while the other 4 matches ended in draws and No results.

Ragama and Navy U23s locked horns at the Navy ground, Welisara after the first day of play was washed out. The hosts won the toss and elected to field on the slow, damp pitch and bundled Ragama CC out for 108 inside 29 overs. Kavika Dilhan contributed the most with the ball for Navy as he picked up 4 wickets, denting Ragama 1st innings.

With less than 35 overs in the day to register a 1st innings win, the hosts looked as if they were in a hurry when they were batting as the Navy batsmen racked up over 200 in the available limited overs. Right hander Shalith Fernando and former Cambrian Savindu Peiris recorded half centuries for Navy in their 203/4 in 33.3 overs. Navy secured 1st innings points as the game ended in a draw.

At the Colts Ground in Colombo, Negombo CC was asked to bat first by home team after a long rain delay, but soon the players had to run to the dressing rooms as the heavens opened up again after 26.4 overs.

Negombo CC were already in trouble at stumps on 65/5 dented by a brilliant display of fast bowling by 20-year-old Nipuna Ransika who claimed 3 wickets for just 7 runs. The match ended in no decision.

Chillaw Marians CC managed to secure valuable points for a 1st innings win in thrilling fashion as they chased 117 inside less than 22 overs in the first innings after they were asked to bat first at Marians Cricket Ground, Katunayake.

Naveen Gunawardana was the star bowler who set the game up for Chilaw as he picked up 5 wickets to dismiss Air Force for 117.

Sawan Prabash played an outstanding knock to propel Lankan CC to 163 in no time as they declared after 35 overs in search of 1st innings victory points after they were put in to bat at Public ground, Bandaragama.

Methushan Kumara and Kaveesh Madurapperuma shared 4 wickets apiece for Nugegoda before their side concluded the day at 100/4. This contest also ended as a no result.