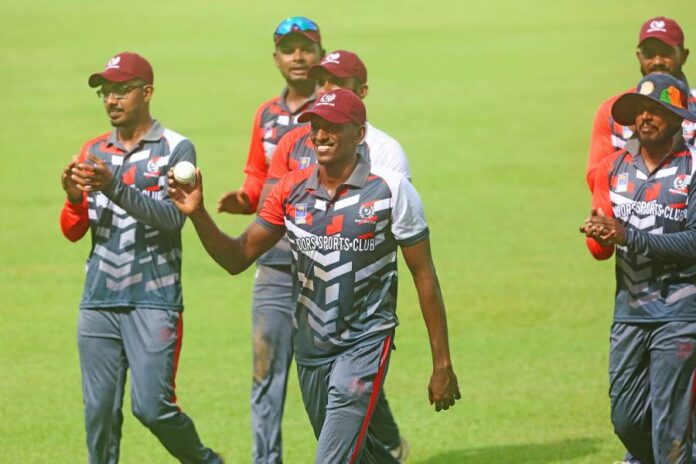 A series of low-scoring encounters, largely due to the effect of rain, came to a close today (28) in the ongoing Major Club T20 Tournament.

Out of all the performances in the six games played today, it was the Moors SC speedster, Milan Rathnayake, who stood out with a terrific spell against SL Navy SC.

The right-arm seamer broke the Navy batting line-up as they were left at an awful 5 for 14 within the powerplay. Four out of those wickets were written after Rathnayake’s name. He kept his onslaught going as he picked 2 more wickets while leaking just 12 runs in his 4 overs. The sailors were undone for just 81 runs, which was an uneventful cruise for the Moors batters.

The school-leaver, Shevon Daniel, scored a fighting fifty for SSC even though he had to unfortunately finish in the losing side. He made 53 runs in a game where only 3 other batters got to 2 figures. With that knock, Daniel is now the highest scorer of the tournament with 168 runs at a staggering average of 84 and an extraordinary strike rate north of 140. Behind him is Bhanuka Rajapaksa with 123 runs.

Thanuka Dabare of Ace Capital CC also hit a vital fifty for his team in the same game against the SSC. Dabare has been a key performer for Ace Capital so far in the tournament as he is among one of the top wicket-takers.

Kurunegala Youth CC skipper Dhanushka Dharmasiri, who is mostly popular for his batting, came in pretty handy with the ball in hand as he bagged 4 crucial scalps at a critical stage of the game to earn his side a close win over KTC.

KTC were given 103 runs to chase down in 17 overs due to bad weather. Dharmasiri took the ball when KTC required just 25 off 24 deliveries: