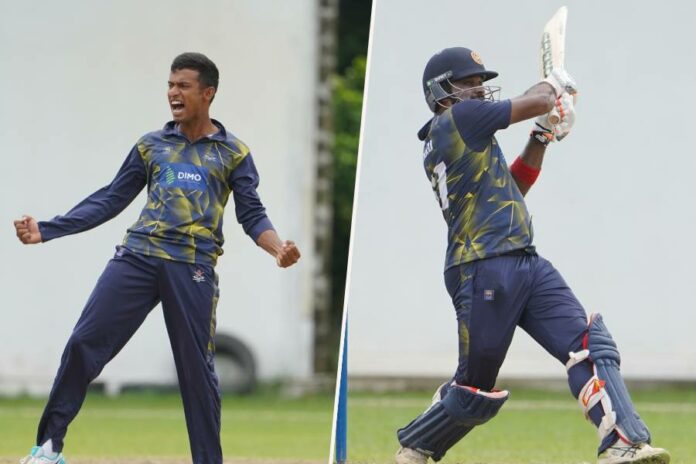 Having played an explosive brand of T20 Cricket so far in the tournament, SL Army SC came into the game as favourites with a host of experienced Cricketers in the ranks.

Among them, Sri Lanka all-rounder Seekkuge Prasanna grabbed the limelight with a quickfire innings with the bat and an outstanding performance with the ball. The hard-hitting right-hander scored 29 runs in 20 deliveries, walking in at No. 3.

The soldiers got a thumping start from their opener Ashan Randika, who smacked 22 off 14 with 2 tremendous hits over ropes.

Randika’s start and Seekkuge’s innings landed as back to back blows for the Colts CC bowling lineup. It unsettled them in the start for a considerable time, which projust enough time for the Army batters to grab the momentum and get ahead in the game.

Nevertheless, seamer Dhananjaya Lakshan was promising with the ball, having dismissed 3 wickets including big guns like Thisara Perera and Asela Gunaratne.

Muditha Lakshan also struck twice for Colts CC including the key wicket of Prasanna, who was a thread.

The boys from Park Road got a fine start to their innings with a modest target of 139 runs to be chased down. Sangeeth Cooray carted Lakshan Gamage for 14 runs in the first over, curtailing his run for the rest of the game.

However, in the very next over, the man-in-form Lakshan Edirisinghe, struck in just his second delivery by picking up the other opener Vishad Randika’s wicket for a duck.

Edirisinghe, who has been a vital cog in this Army outfit this season, kept his promise to the team and picked up two more wickets in the game, leaking just 19 runs in his 3 overs. His two scalps were the aggressive Avishka Perera and the energetic Dhanajaya Lakshan, which were a massive contribution for the team.

Prasanna came into the attack in the middle overs to ensure that Colts CC had no way back into this game. His skiddy leg-spinners earned him 3 wickets at the expense of just 17 runs.

Colombo Colts CC were bundled out for just 94 runs as the soldiers celebrated a comfortable 45-run victory to crown themselves the Champions of the Major Club T20 Tournament 2022.

Army SC’s fiery opener Ashan Randika ended the tournament as the highest run-scorer with 286 runs at a healthy average of 40.85, and an astounding strike rate of 151.32.

This tournament also became a good platform to re-announce himself for Akila Dhananjaya who ended at the top of the wickets column picking up 17 wickets in 8 games.