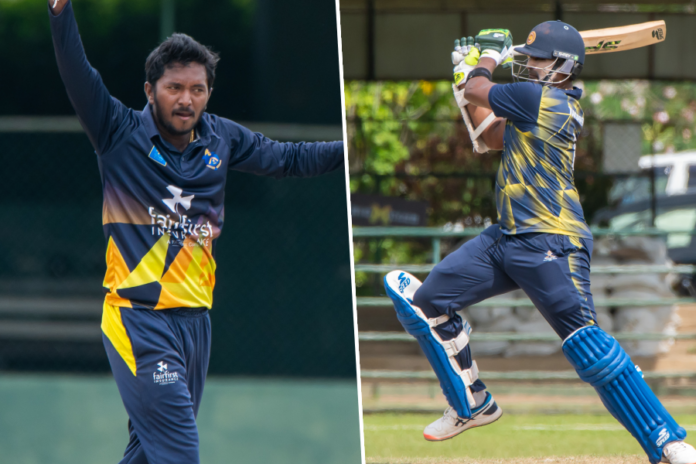 Sri Lanka Army SC and Colombo Colts CC will meet at the finals of Major Clubs T20 Tournament on Friday (17), as they defeated Saracens SC & BRC respectively in the semi-finals.

Vishad Randika led the batting for Colts in the first semi-final, as the right-hander posted 35 off 30 to push his team to a total of 128 runs.

There were also some useful contributions from the young gun Ravindu Rashantha, who made a quickfire 21 with 3 big hits over the ropes, while a senior hand in the team, Hashan Dumindu, also managed to make 22 runs.

Although some would think 128 runs would not have been enough in a semi-final, the Colts bowlers proved it to be plenty for them. They uprooted the BRC team for just 61 runs as their Skipper Akila Dhananjaya bagged 3 scalps for just 3 runs, bowling 3.3 overs with a maiden.

That killer spell was supported by almost all the other 5 bowlers used as each of them recorded wickets to their name, while Muditha Lakshan became the pick of the 5 with figures of 2 for 18.

While the Colts trailed by spin, the soldiers put up a proper display of T20 hitting to earn their spot in the finals.

Veterans of the team, Seekkuge Prasanna and Lakshan Edirisinghe, set up the game for Army as they blasted 51 runs in no time for the 3rd wicket. Edirisinghe made 27 off 18 with 3 sixers for his merits, while Prasanna clubbed a couple of sixers and 3 fours on his way to 39 runs off 30 deliveries.

Then Skipper Thisara Perera walked to the crease. He set the rest of the innings on fire as the southpaw clobbered 4 sixers out of the park and smashed a couple of balls along the ground for four. 26 deliveries later, the former Sri Lanka T20 Captain remained unbeaten on 50, showing his class in this format of the game.

It was an uneventful chase from the Saracens Sports Club team as they only managed 117 runs for the loss of 8 wickets in 20 overs.

Edirisinghe was instrumental with the ball in hand too as the right-arm offie picked up 2 key wickets – Sithara Gimhan & Navindu Nirmal – for just 8 runs in his 2 overs.

The finals will be played on the 17th of June, Friday, at P Sara Oval, Colombo. LIVE actions of the game will be available on the Sri Lanka Cricket YouTube channel, ThePapare.com Website, Dialog TV Channel 140, ThePapare.com YouTube channel, Dialog Viu App and ThePapare Cricket Facebook page. Broadcast will begin at 9.45 am and the first ball will be at 10.00 am.