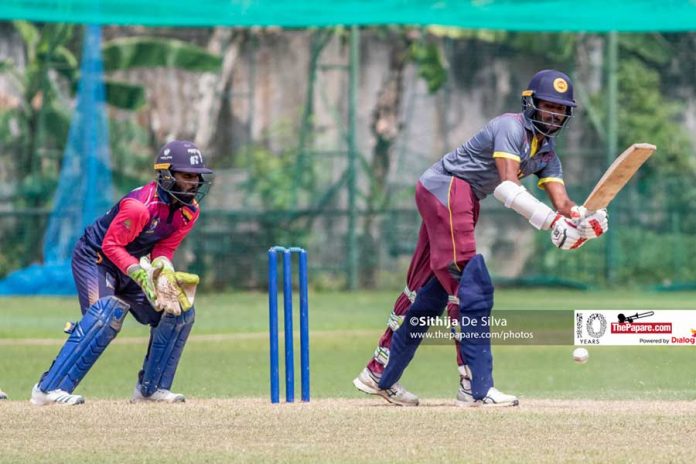 The much fancied NCC outfit will take on the dark horses of the tournament, Chilaw Marians, on Tuesday (31) in the final of SLC Invitation Tournament at the SSC with the game being telecasted live on ThePapare.com from 9.30 a.m. onwards.

The tournament which had dark clouds over it due to a court case, finally got underway on the 14th of December and produced some thrilling results while tier B teams Air Force SC and Panadura SC also made the quarterfinals before being knocked out of the tournament.

NCC‘s road to the final…

Chilaw Marians got the better of NCC during a group stage game, but NCC were the more consistent team as they topped group B with Marians finishing second.

NCC were involved in two nail-biters in their quarter-final and semi-final respectively as they overcame Saracens by 3 runs before defending 194 against Army SC which had the likes of Dinesh Chandimal, Asela Gunaratne and Thisara Perera.

Marians’ road to the final…

The Marians meanwhile had smooth progress in the quarter-final beating Panadura SC by 130 runs but had a slight scare before securing a tough three wicket win against SSC in the semi-final.

Players to watch out for(NCC)…

Pathum Nissanka has made large strides in the domestic circuit and has had a quiet tournament by his standards. He’s known to be a big match player so don’t be surprised if he bats Chilaw Marians out of the game.

Sachindu Colombage’s stocks are rising fast as a wrist spinner and his among the top wicket takers of the tournament so far. He went for a few runs in the semi-final clash, but he showed his wicket taking ability with another three-wicket haul and keeping him wicket-less in the middle overs will be vital for the Marians’.

Players to watch out for (Marians’)

With Oshada Fernando most likely to be rested ahead of Sri Lanka’s tour of India, Shehan Jayasuriya will have a lot of responsibility with both bat and ball for Chilaw Marians along with the tag of captaincy. He has been in decent touch so far with vital knocks and will look for a big performance come the final.

The Indian born and less known Sumit Ghadigaonkar will be a vital wicket for NCC as he has been Chilaw’s standout performer in the knockout stage. It comes as a surprise how he only made his debut in the quarterfinal against Panadura SC, but he has made a century and 99 in his two List A knocks so far.