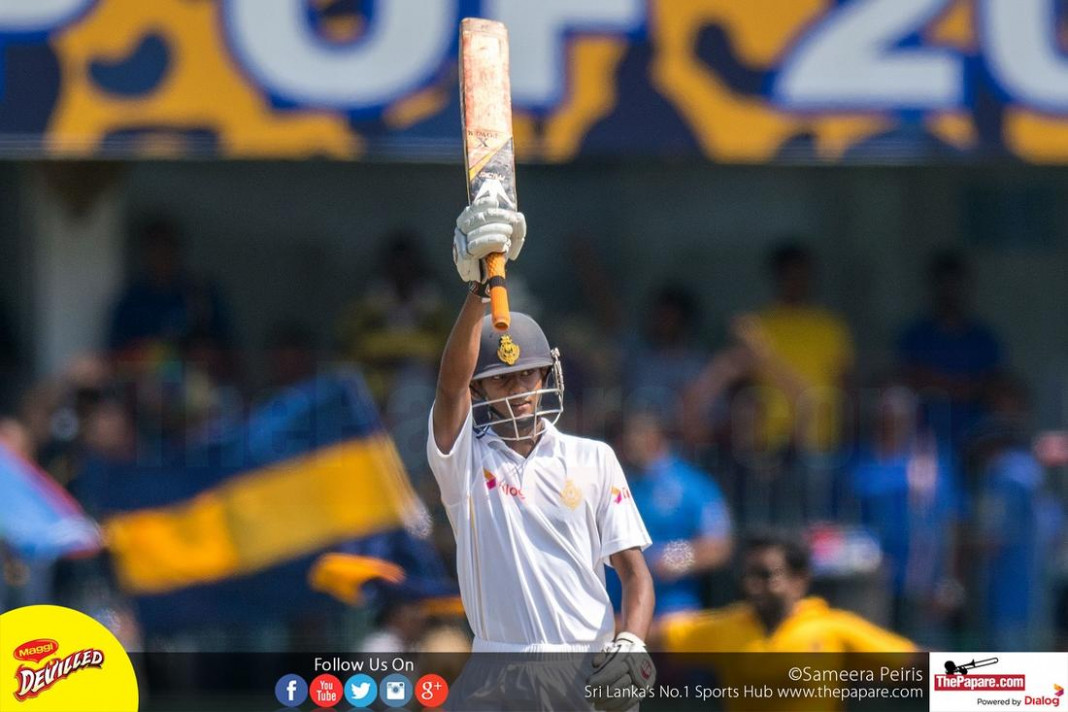 Sixteen year old Pasindu Sooriyabandara stroked an exhilarating and unbeaten 97 as Royal College staged a brilliant fight back against S. Thomas’ College on day two of the 137th Battle of the Blues at SSC grounds.


The 139-run sixth wicket partnership between Pasindu Sooriyabandara and Malith Kariyawasam which is also the second highest 6th wicket stand in the history of the Royal-Thomian, ensured Royal College will stay in contention to inflict a draw on day three even though they are still 70 runs behind with only 3 wickets in hand.

An unscathed marathon knock of 97 in 280 balls including 13 boundaries galvanized the ground as he showcased excellent determination and concentration levels to play a magnificent anchor role.

Earlier in the first session, the Royal openers batted positively to add 37 runs for the first-wicket before left-hander, Naveen Widanapathirana was caught at slips by Ravindu Kodituwakku as the 16-year old fast-bowler Yohan Perera struck on his first delivery of the match.

Ronuka Jayawardene and one-drop batsman Sooriyabandara constructed a solid 28-run stand but the left-arm spinner Dellon Peiris struck on his first over when a leading edge off Jayawardene’s bat flew to the mid-off fielder, Senal De Silva.

Skipper Panditharathne was the next victim when he fell for 26 to the bowling Perera as the outside edge was taken cleanly by first-slip fielder Romesh Nallperuma. Perera struck once more during the last over of the first session when the surprised number 3 batsman Lasith Embuldeniya was caught LBW as the Royalists were reeling at 96 for 4.

After lunch, fast-bowler Hansaka Liyanarachchi got the prized scalp of vice-captain Thiran Dhanapala for 9 when he was caught down the leg-side by wicket-keeper Gunathilake as Royal lost half of their side to only 122 runs.

Kariyawasam played a more aggressive role in the 139-run as he made 12 fours to notch up a richly-deserving 79 as Royal avoided the follow-on before the valiant knock of Kariyawasam was ended by the Thomian skipper Jayathilake who trapped him right in front of the wicket.

Thomians were starved for wickets for more than three hours but they did not let number 8 batsman Ganith Sandeepa settle down as Liyanarachchi removed him for no score.

Senior player, Helitha Vithanage hung in their patiently with Sooriyabandara till close of play as Royal College took major honours on a long Friday.

Video – Can Sri Lanka level the series in Pallekelle? –...