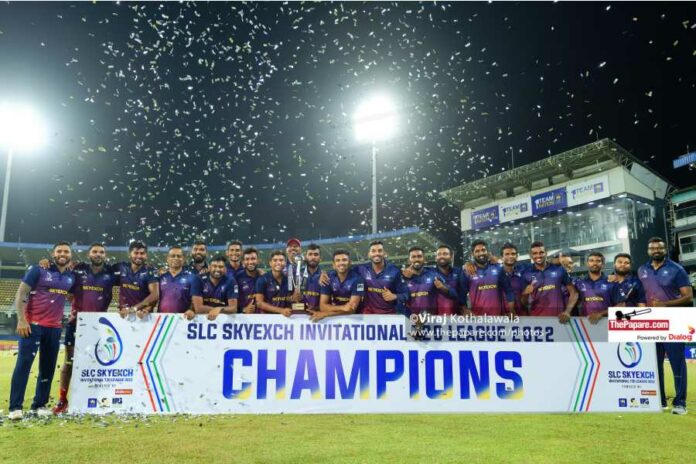 The final of the SLC Invitational T20 League was worked off today at the R. Premadasa International Cricket Stadium, between the SLC Reds and SLC Blues. In very much one-sided affair, the group stage toppers SLC Reds, led by Kusal Mendis, managed to walk out with the trophy.

The Reds, who won the toss, decided to field first today, trusting their full their star-studded bowling lineup to restrict the SLC Blues to a low score. The Blues, who came in to the finals without their Skipper Charith Asalanka and opening batsman Dhanushka Gunathilake, had a depleted batting lineup which clearly struggled against the classy bowling of the Reds. Both Lahiru Udara and Dhananjaya de Silva managed to get starts, but were unable to convert them into big ones. Ashen Bandara, who was in good touch throughout the tournament, scored another unbeaten 40 off 30 deliveries to take the Blues to a total of 136.

Although the Blues were just 4 wickets down at the end of the 15th over, the Reds death bowlers conceded only 33 runs in the final 5, including just 3 fours. Maheesh Theekshana, who took a stunner off his own bowling to remove Sadeera Samarawickrama, ended with figures of 2/22. Asitha Fernando, who was brilliant, especially in the death overs, clinched 2 wickets for 31 and ended the tournament with a total of 10 wickets – the highest of the tournament.

Reds opening batter Lasith Croospulle, who was dismissed by Dilshan Madushanka two days ago, was a man on a mission today as he tore apart the in-form left-arm pacer and scored 18 runs off his very first over. Since that start, there was no looking back for the Reds as the Blues never really found an opening to make a comeback. It took them only 16.5 overs to chase the target down at the expense of just 3 wickets to become the champions of the SLC Invitational T20 League 2022.

Skipper Mendis, who was in sublime touch in this tournament, played another crucial knock to score an unbeaten 56 off 45 deliveries to take his side home. His tally in the tournament increased to 206 runs from 4 innings, which is also the highest of the tournament. Croospulle scored a quick fire 25 off 15 at the top, and Wanindu Hasaranga who hit the winning runs was not out on 24.

Mendis, who led from the front for SLC Reds walked out with the Best Batsman of the Tournament award, while Praveen Jayawickrama, who showed signs of good form once again as a bowler and took 7 wickets in 4 games, was adjudged Best Bowler of the Tournament. The Player of the Tournament award went to the aggressive right-arm pacer Fernando, who took 10 wickets after conceding just 110 runs off his 16 overs in the whole tournament. Fernando started the tournament with a 4 wicket haul against the Greys, and then took 2 wickets each in the next 3 games including the finals.

With the end of this tournament, the Sri Lanka national Cricket team will head off to compete in the Asia Cup, while for the others, it is now a matter of shifting gears and getting ready for the SLC Major League 2022 three day tournament, which will begin on the 19th of August.

For all the latest developments of upcoming Cricket fixtures, stay in touch with thepapare.com.