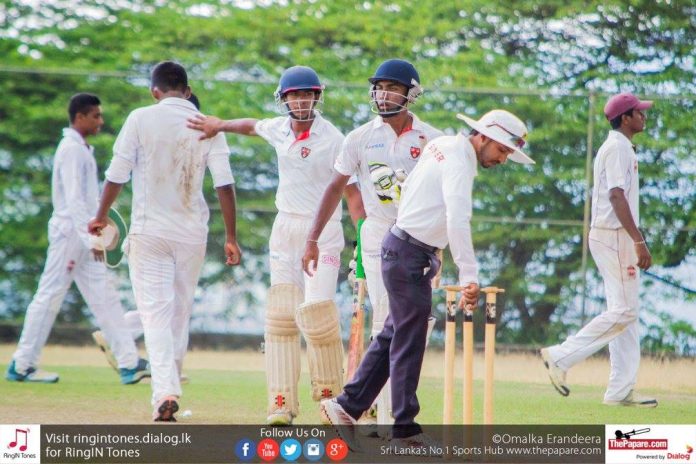 Several games of the Singer U19 Division I Cricket Tournament began today (22nd October) while the Trinity vs St. Sylvester’s game ended in a draw at the Asgiriya Stadium.

St. Sylvester’s scored a pained 88 runs for their first innings batting first after winning the toss. Trinity seamer Ruvin Peiris, was lethal and accurate as he ripped the Vesters apart with figures of 6 for 40 in the first innings.

In reply, neither did Trinity come up with an exceptional batting performance as they stumbled on their way to 166 for 8 before they declared their innings. Skipper, Pubudu Bandara, stood out by scoring more than half of the runs of the innings. For St. Sylvester’s, Pasan Hettiarachchi and Nishantha Indrajith both picked up 3 wickets each.

The Vesters batted for another 33 overs in the game and had scored a steady 66 runs for the loss of 3 wickets when the umpires decided to put the bails down.

After winning the toss, St. Servatius College decided to bat first on the rain affected day one of the game. Deshaka Denuwan top-scored for St. Servatius as they were eventually uprooted for 82 runs. Sri Lanka cap, Kalana Perera picked up 3 wickets for 27 runs while Kishan Munasinghe and Shalin de Mel both picked up 2 wickets each.

Prince of Wales won the toss and elected to bat first. They had a tough outing against the Nalandians as they were undone for 150 runs in 43. 3 overs. Jithesh Vasala was the pick of the bowlers with figures of 4 for 48.

In reply, Nalanda ended the day comfortably at 87 for 3 after batting for over a session. Dilhara Polgampola scored 33 runs while Suhath Mendis picked up 2 wickets for 19 runs. The play will resume tomorrow for day two.

Rahula College, who decided to bat first after winning the toss, posted a comfortable total of 203 runs for their first innings. Binara Sampath hit a half-century while Ovin Bopage and Bhagya Vimath passed the 30 run mark. Kavindu Nadeeshan picked up a five-wicket haul to keep Dharmasoka in the game.

The lads from Ambalangoda came back into the game strongly as they were cruising comfortably at 83 runs for the loss of 1 wicket by stumps. Hasitha Rajapakshe and Sasindu Malshan were at the crease with scores of 32 not out and 24 not out respectively.

The right-handed batsman Dilesh Perera’s ton and Sachintha Mahindasinghe’s 90 runs propelled the Joes to an easing 292 runs for their first innings. Sasitha Ahan was exceptional with the ball as he bagged 6 wickets for 113 runs.

The day was then suspended due to bad light after seeing just two deliveries of the Gurukula innings. The game will resume tomorrow for day two.

Ananda College played Thurstan College in a Group ‘D’ fixture at Surrey Village, Maggona. Thurstan won the toss and elected to field first. Ananda posted a convincing 190 runs on board for their first innings. Janidu Jayawardena scored 42 runs for Ananda while Yohan Liyanage of Thurstan College picked up 3 wickets for 29 runs.

In reply, Thurstan College scored 64 runs for the loss of 3 wickets in 17 overs. Saviru Bandara picked up 2 wickets for 14 runs. The game will resume tomorrow for day 2.