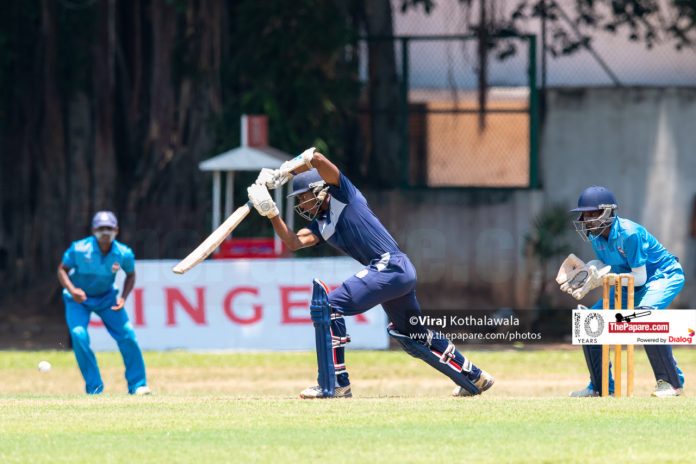 The high-riding S. Thomas’ College, Mount Lavinia secured an easy 57-run win over Thurstan College, Colombo in the second Semi-Final of the Singer U19 Division One Limited Overs Tournament 2018/19 at Royal College Grounds in Colombo on Saturday.

After winning the D.S Senanayake Memorial Shield last month, the ‘School by the Sea’, led by Sithara Hapuhinna, reached their second final inside three days. For the first time in the history of Thomian cricket, they won the ‘Big Match’ and reached the finals in all tournaments, after they secured a spot in the two-day tournament as well.

On another hot and humid day, skipper Hapuinna had no hesitation to bat first. Despite not having their best batsman, Ravindu De Silva due to an injury, the Thomian top order fired once again as they managed to post a formidable total of 250 runs from their allocated 50 overs.

Kishan Munasinghe was the top scorer with a quick fire 59, while opening batsmanShalin De Mel scored 52 at the top. Thurstan College captain, Sandaru Dias was the pick of the bowlers for the Thurstanites as he picked up 2 for 38 runs.

Ravindu and Umayanga bat through to finals

In response, the Thurstanites did not get the ideal start they so badly needed. They were found reeling at 9 for 3 as left-arm seamer Kalana Perera ran through the Thurstan top order.

They needed a big partnership to come back into the game and they got that through Avishka Kaushalya and Ranesh Silva. The pair carried them to the 100 run mark but after the wicket of Ranesh Silva, things went all downhill for the Thurstan lads.

Avishka Kaushalya fought hard for his half-century and found good support in Nimesh Perera and Ayesh Harshana, but the target ultimately proved too much of a task. They finally succumbed to 193 runs in 47 overs. Kalana Perera ended up with 4 for 34 while former skipper Dellon Peiris bagged 2 wickets with his left-arm spin.

S. Thomas’ College will now take on the defending champions, Richmond College in the Final, scheduled on 9th April at the Galle International Cricket Stadium. Watch the live action of the Final on ThePapare.com, Dialog Television Channel No.77 and MyTV.