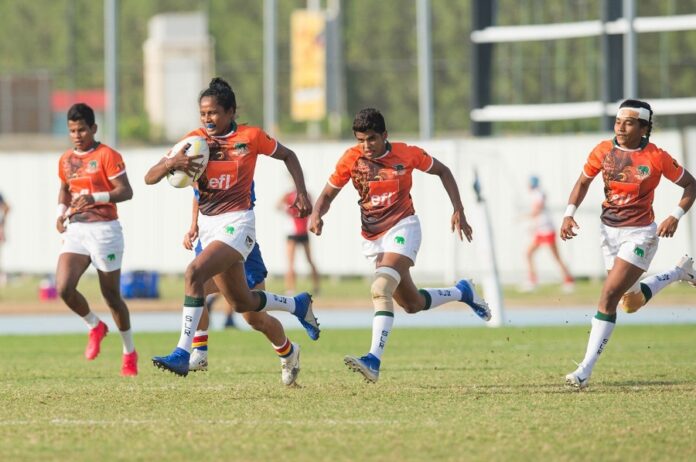 Both Men’s & Women’s teams started off with closely fought victories against Philippines in the plate semi final before stumbling to UAE & Thailand respectively in the plate final. 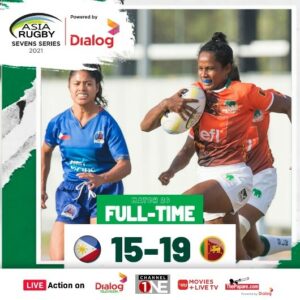 Sri Lanka Women’s team despite facing two heavy defeats at the hand of Hong Kong and China yesterday (20th) came out all guns blazing in the Plate Semi Final against the Philippines. Sri Lankan Skipper Dulani Pallekondage touched down for the opening try from an inside ball within minutes of the kick off putting the Lankan lasses in the lead (5-0). Philippines struck back immediately and managed to cancel out the score with an un converted try (5-5). Sri Lanka seemed to be using the inside channel to great affect as they managed to put Anusha Attanayake under the post, at the stroke of half time. Scores read 12-5 at half time in favor of Sri Lanka.

The half time discussion seemed to have shifted the tactics for Philippines with them opting to use their large framed players to go into contact and offload in contact opening holes in the Sri Lankan defense. This strategy delivered terrific results for the Philippines as they hit back with a brace of tries to take the lead. In the final minutes of the game Sri Lanka received a penalty mere meter away from their own goal line. Skipper Dulani took matters into her own hands as she ran latterly in the red zone and sprinted over 90 meters to score a try in the last minute to win the game 15-19. 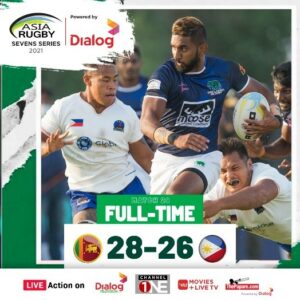 Men’s team also met Philippines in the Plate Semifinal which turned out to be a dramatic finish. Tuskers got onto an electrifying start as they managed to touch down soon after the kick off through hot stepping Anjula Hettiarchchi who surprised the defenders. Minutes later Nishon Perera touched down again to further extend the lead for the tuskers. Anjula who seemed to be in terrific touch managed to score his second giving Sri Lanka a comfortable lead although Philippines managed to pull one back just before half time. At Half time the scores read 05-17 in favor of Sri Lanka.

In the second half Philippines were the more dominant team as they made a terrific come back scoring two tries and a managed to take the lead 19-17, in form man Anjula hit back again with the score moving to 19-24 in favor of the Tuskers. After a few nervy exchanges Philippines touched down in the final minute of the game and the conversion sailed through the uprights and it was believed that they managed to grab the game away from Sri Lanka 26-24. However, a twist emerged as the scorers and the broadcasters of the tournament had made an error in not adding the successful conversions of team Sri Lanka in the first half. While Half time score read 05-17 it should have been 05-21 as Sri Lanka had managed to convert all their tries. Sri Lanka who scored 4 converted tries were announced as the rightful winners and advanced to the Plate final of the competition.

Sri Lanka women met Thailand who has been one of the most improved teams in the competition and played dynamic through, they were unlucky to miss out on a semi final spot and were all out to make a statement in the Plate Final. Thailand dominated the proceedings from the kick off and did not leave any opportunity for the Lankan lasses. Thailand took home he plate with a dominant win with the finals score reading 45-00.

Sri Lankan tuskers faced host UAE for the second time in the competition, in the Plate final. UAE consisting of players of European and Pacific origin were a massive mismatch physically to the Lankans, but the young tuskers were up to the task as they were determined to not give up until the last minute. Despite a spirited effort by the Sri Lankans UAE out muscled Sri Lanka to win the plate final 29-10.