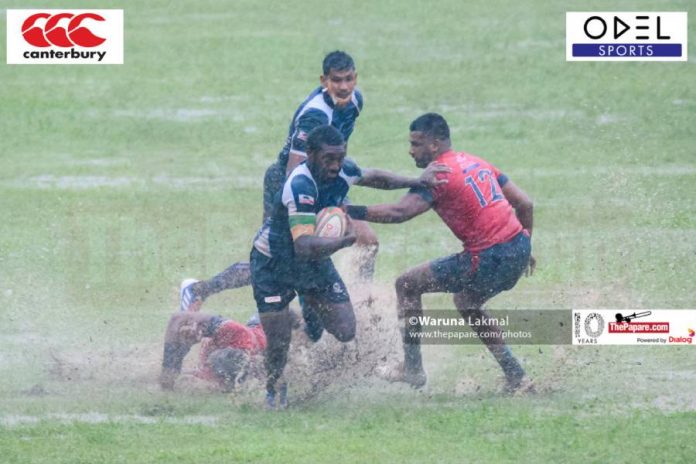 Police Sports Club continued their purple patch as clinched their fourth consecutive game of the 2019/20 Dialog Rugby League worked off at Police Park as CR & FC in an unprecedented move forfeited the game in the 67th minute. After leading 20 points to 06 at half time, the Cops went on to finish the game with a bonus point as the scores read 27 – 16 after the final whistle.

It was a game purely dominated by police from the get-go as Yohan Peiris opened scoring from a penalty as CR made Nine changes from their starting lineup last week against Kandy.

Police managed to score twice in quick succession through Hashan Fernando and Kavinda Jayasundara while CR managed to add three-points from a penalty kick from Riza Mubarak. (POLICE 13 – 03 CR)

CR lost Jero Dananjaya for ten minutes as he made a no arms late charge on Emosi Vunivosa and then lost their standing skipper Rahul De Silva for an infringement at the breakdown.

The De Silva yellow card sparked some controversy as the CR & FC team went off the field protesting against the harsh decisions made by the match referee Hasantha Weranga. After lengthy discussions between the management of the CR team and the match Commissioner Zaffarullau Rahuman play resumed.

Police continued to play attacking rugby as Kavinda Jayasundara powered over from No 08 break from a scrum with Yohan Peiris converting to extend their lead the final stages. After CR clawed back some points with Riza Mubarak penalty the cops went to break with a fourteen-point lead.

CR & FC were quickly on the scoreboard in the second half thanks to Riza Mubarak’s third penalty of the game while Police replied immediately as their Fijian sensation Emosi Vunivosa powered himself over two the CR defenders to score the bonus point try for police. (POLICE 27 – 09 CR)

CR kept on fighting as Murshid Zubair exposed the Police midfield defense by stepping past Primesh Danushka as he offloaded timely pass to Wajid Fawmy and cantered away to score the first try for red shirts. (POLICE 27 – 16 CR)

On the 67th minute of the game, controversy sparked again as CR side went off the field again as they were not allowed to bring in their regular skipper Omalka Gunarathne into the game. After another discussion with CR & FC manager Hussain Shiek and the match Commissioner Zaffarullau Rahuman, CR & FC made an unprecedented move to forfeited the game.

Thepapare.com learned after inquiring with the match Commissioner Zaffarullau Rahuman that CR & FC forfeited game as they were not allowed to bring in their skipper Omalka Gunarathne as he had sore eyes and he was cleared before the game but after a written protesting letter given by the Police sports club during the game the match doctor Dr. Namith Sankalpana didn’t clear Omalka Gunarathne to play the game hence CR forfeited this Dialog Rugby League encounter.