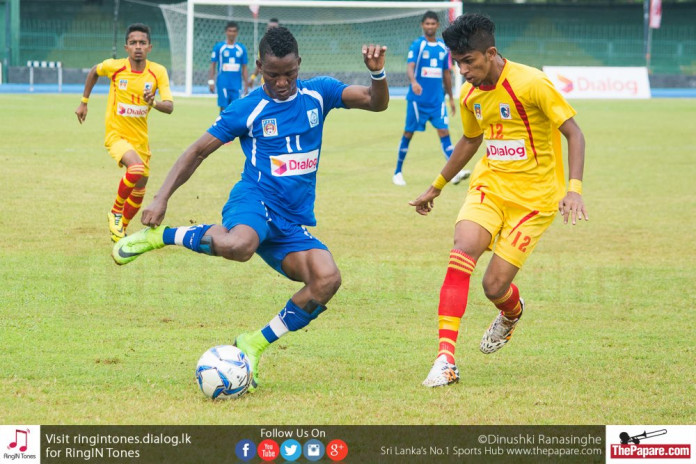 Goals by Isaac Aba and Christopher Erastus gave Crystal Palace FC a 2-2 draw against Navy at the Sugathadasa Stadium in round 1 of the Dialog Champions League, Super 8 round.


Navy SC led at the break 2-0 but Crystal Palace came back strongly to make it a draw.

This was the third match of the Super 8 stage which kicked off on Saturday at the Sugathadasa Stadium. Both Navy and Crystal Palace had equal performances in the group stages. Navy edged over New Youngs to steal that final spot in Group B while Crystal Palace took third place in Group A. Stats showed that it will be a close game but it all depended on each team’s performance on that day.

First half was dominated by Navy, eight minutes into the game they drew first blood thanks to lazy defending by the boys from Gampola. Subash Madushan sent the ball from the half line towards David Osagie who was at the tip of the box. Osagie had a fine first touch which set up nicely for him to place the ball into the goal. Navy looked far more organized in the first half as they enjoyed the majority of possession. The Sailors went on to score their second goal few minutes before the half time. Tharindu Eranga taking the free kick from the left side and sending it right across the goal, Chalana Chameera timed his run perfectly to chip the ball back across to Peter Charles who only needed to get a feather on it to find the back of the net. Navy had a tight grip on the match but there was enough time for a comeback.

Crystal Palace had their chances in the match but they failed to capitalize on them. Their striker Isaac Aba together with Jean Francois and Mohommed Razwan looked lethal at times but they couldn’t find that final killer touch to draw back the deficit.

Second half was a disaster for the sailors. Few minutes into the second half Navy goalkeeper Udayanga Reginold conceded a penalty which was missed by Isaac Aba. But fortunately Isaac got a chance to make amends few minutes after when Christopher Erastus was tackled by Chathuranga Silva inside the box. Isaac did not let this chance go begging as he cut the deficit in half.

Crystal Palace showed some quality in the second half which took the sailors by surprise. The magical equalizer came in the 61st minute by Erastus when he absolutely bludgeoned the ball to the top right corner giving no chance to Reginold to cover up after turning two defenders. Crystal Palace back on the hunt and surely with this momentum they looked favorites to take the win. Both teams had their chances till the very end but they weren’t able to find the winning goal. Crystal Palace was rescued from defeat by their goalkeeper Dasun Paranavithana, showcasing some fine work with gloves. Navy was denied quite a few times by Paranavithana with efforts from Nalaka Roshan, Chathuranga Sanjeewa and David Osagie. Crystal Palace taking a point and bag full of confidence going into the next match.

“The guys were somewhat nervous in the early going and Navy being a strong side didn’t help either. After the first half it all went away and the guys functioned according to the plan. I worked with Dasun (Paranavithana) when I was with Up Country and he played really well in his debut for us. Every match is crucial in the Super 8’s,” a satisfied Crystal Palace coach R. Devasakayan told ThePapare.com.

“We didn’t play like we did in the first half had easy chances and we missed them as well. Plays from the middle did not go as planned. Crystal Palace played well in the second half. Priyadarshana played well after replacing Christeen,” Navy coach Dammika Athukorale added.