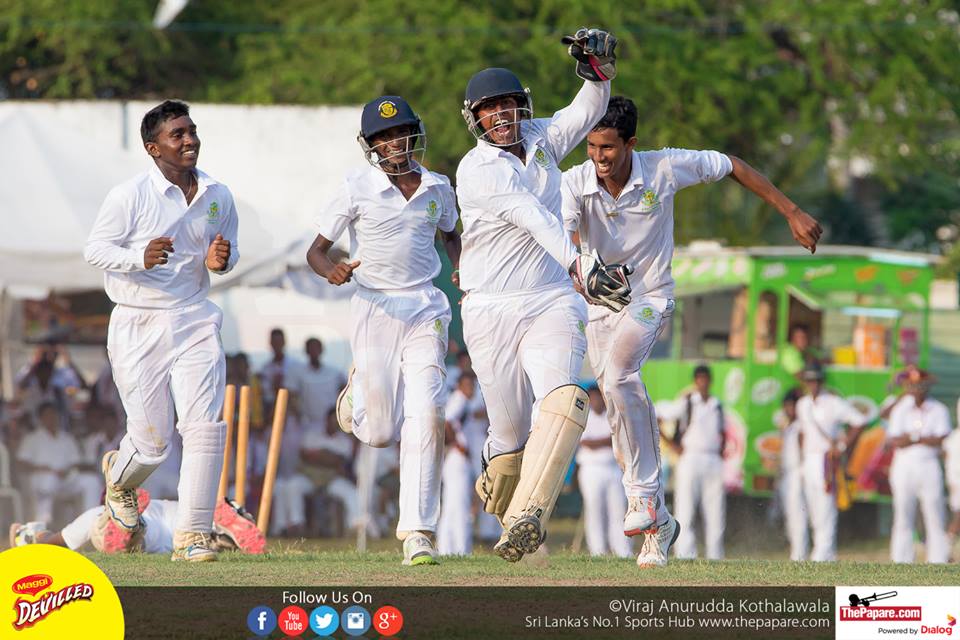 Another half a century old rivalry unfolded at the Tyronne Fernando Stadium today. St Sebastian’s College and Prince of Wales have been humble servants of Sri Lanka Cricket. Both teams were led by Sri Lanka U19 caps who representedthe country in the recently concluded world cup. St Sebastian’s skipper Avishka Fernando, stylish right handed opening bat showed real class in the world cup matches. Their rivals were skippered by Thilan Nimesh Kumara, left arm orthodox bowler who also fared well at the World cup. St Sebastian’s coming in as the stronger side will have a good chance of creating a result  this year while POW will be the underdogs .

Sebs won the toss and elected to bat first. They started off positively with both openers batting fluently until they lost their first wicket at 45 runs. With that opening POW came back strongly with the big wicket of Avishka Fernando for 2 runs and two more wickets shortly afterwards to put St Sebastian’s 4 down for 72 runs in 22.2 overs. Opening batsman Praveen Perera and Mishen Silva put up a vital 30 run partnership before Mishen was sent back to the pavilion leaving Sebs at 100 for 4.

Praveen Perera lost his wicket shortly afterwards putting his team in deep trouble. No 7 batsman Tharusha Fernando perished after a well made 27 and he was shortly followed by Sachintha Silva for 0, Sebs crumbling at 110 for 8. Then came the important partnership between Nimesh Bandara and Praveen Jayawickrama. Nimesh Bandara notched up a 42 ball 44 with 6 fours and 1 maximum to put his team back on track. Praveen chipped in with 23 runs in 31 balls with four boundaries. Thanks to that unbeaten 44 by Nimesh St Sebastian’s posted a decent first innings total of 188 all out in 49.5 overs. In the bowling department for POW Dilnka Maduranga and skipper Thilan Nimesh took 3 wickets each

POW came on to bat in the second session. Sebs got off to a flying start with a wicket in the second over and they did not look back from that. They kept on attacking and put immense pressure on Prince of Wales who had their top 5 dismissed for just 51 runs with only Sadun Soyza getting into double figures. Right handed opening bat Sadun Soyza top scored for POW with 18 runs on day 1.

There was some consolidation from Sanoj Dharshika and Avidu Fernando. Both hanging on at the crease for more than 8 overs and getting into double figures for POW. The costly run out of Avicu Fernando left POW 82 for 7 just minutes away from close of play. St Sebastian went on to take one more wicket before the end of play to have their arch rivals in all sort of trouble at 89 for the loss of 8 wickets in 47 overs.

St Sebastian’s with the upper hand have enough time to get a result from this but for POW it will be all about getting through the second day and saving the match.