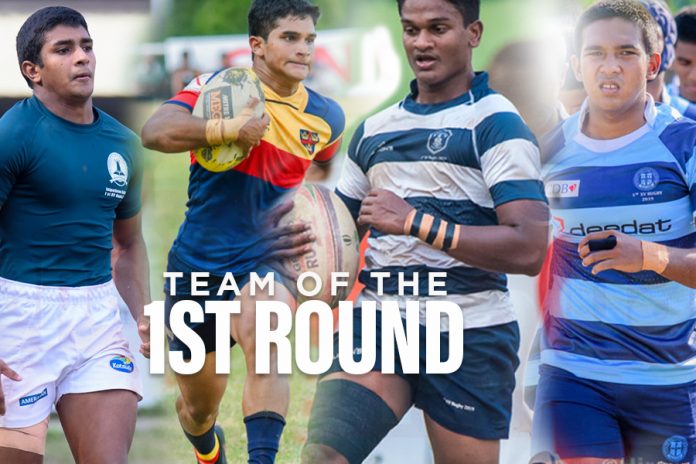 With the 1st Round of the Singer Schools Rugby League coming to a conclusion last month, here’s a look at ThePapare’s Team of the 1st Round after the end of five weeks of rugby action.

ThePapare’s panel of commentators and writers picked this XV taking into consideration the players’ performances in the 1st round. 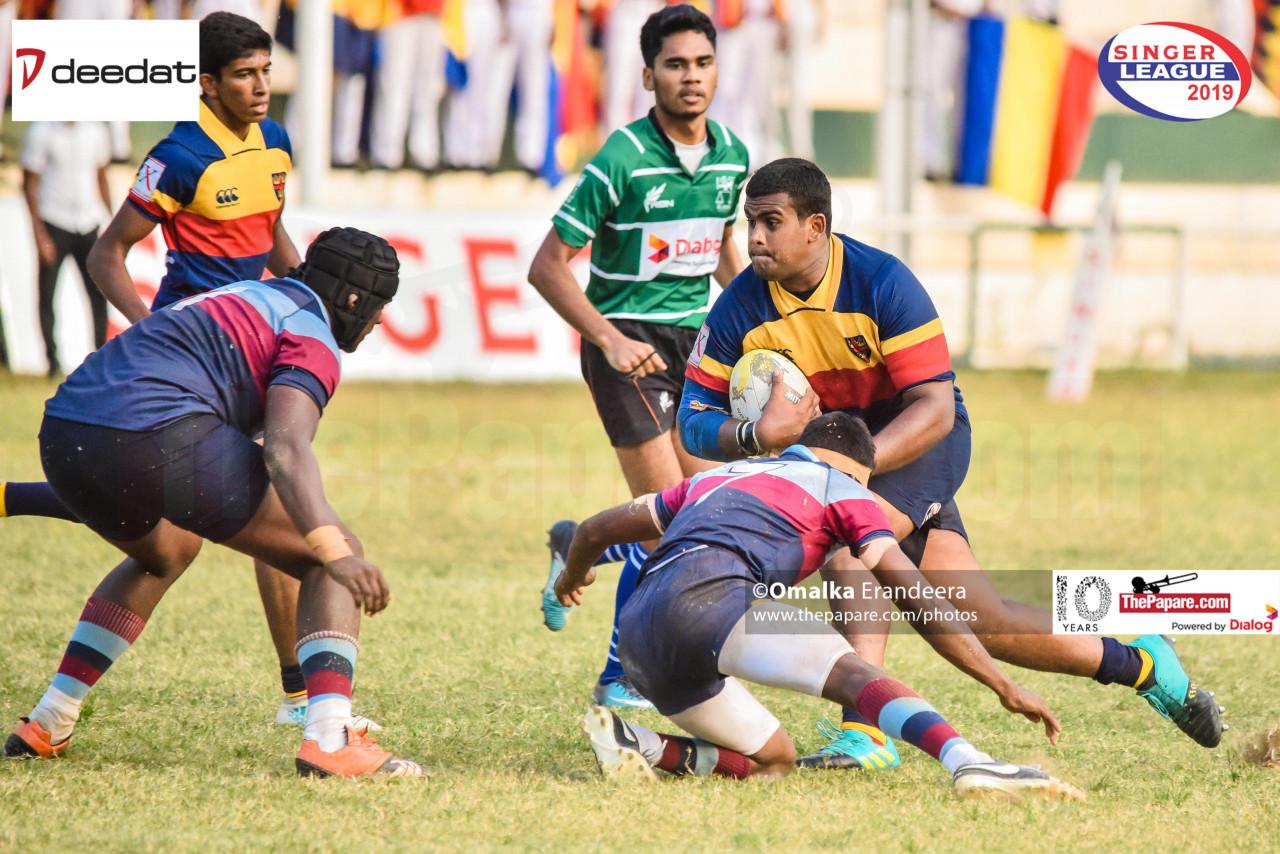 Trinity’s big-made front rower, Nimesh Weerasinghe has been carrying the side through an average season so far. Ekanayake has played a key role in Trinity’s wins that came against St. Anthony’s, Science and Zahira while his contribution in the scrums have been vital. 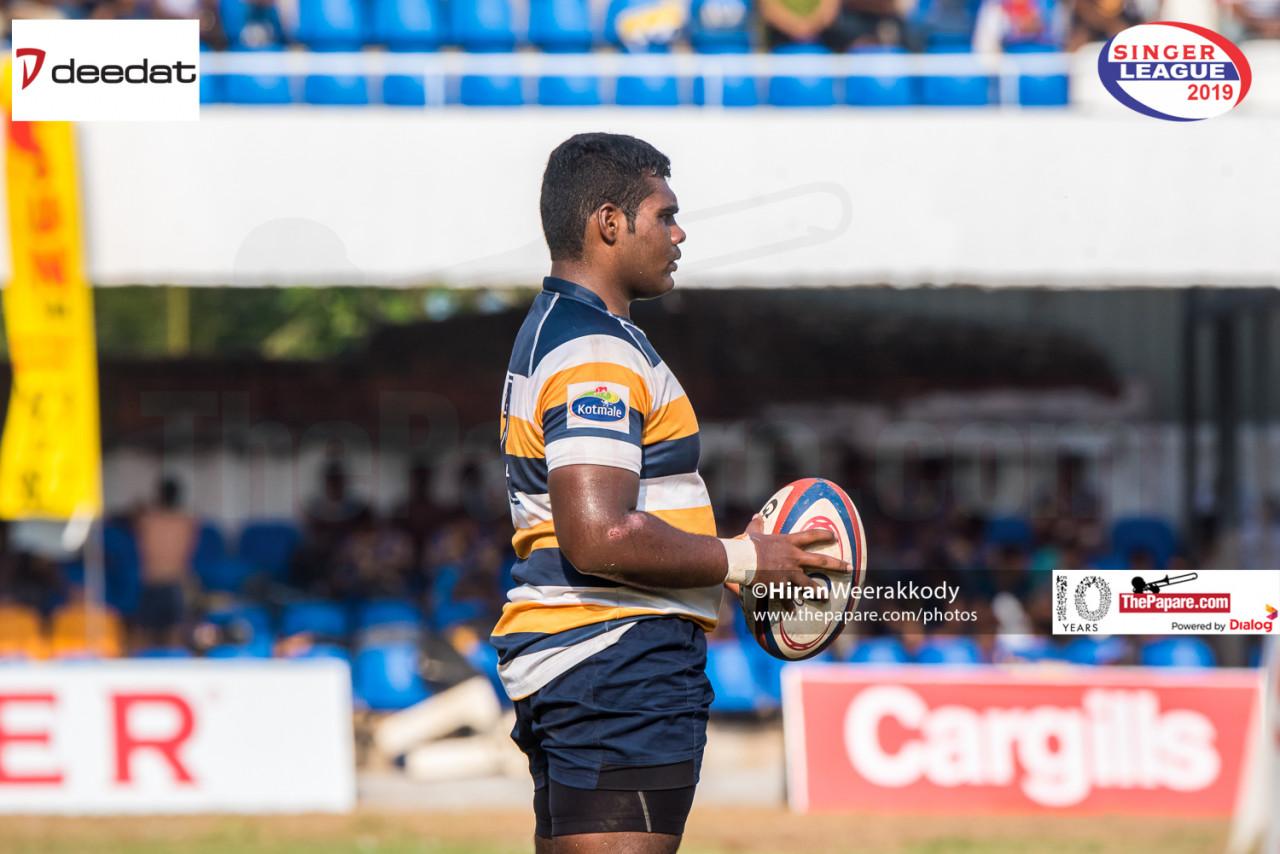 As a hooker, Julian Charles has done exactly what is required of him. Credit to him, the Peterite lineouts have been smooth and his efforts in the rolling mauls and broken play have been impressive. This success story put the Peterites on top of the group at the end of the 1st round. 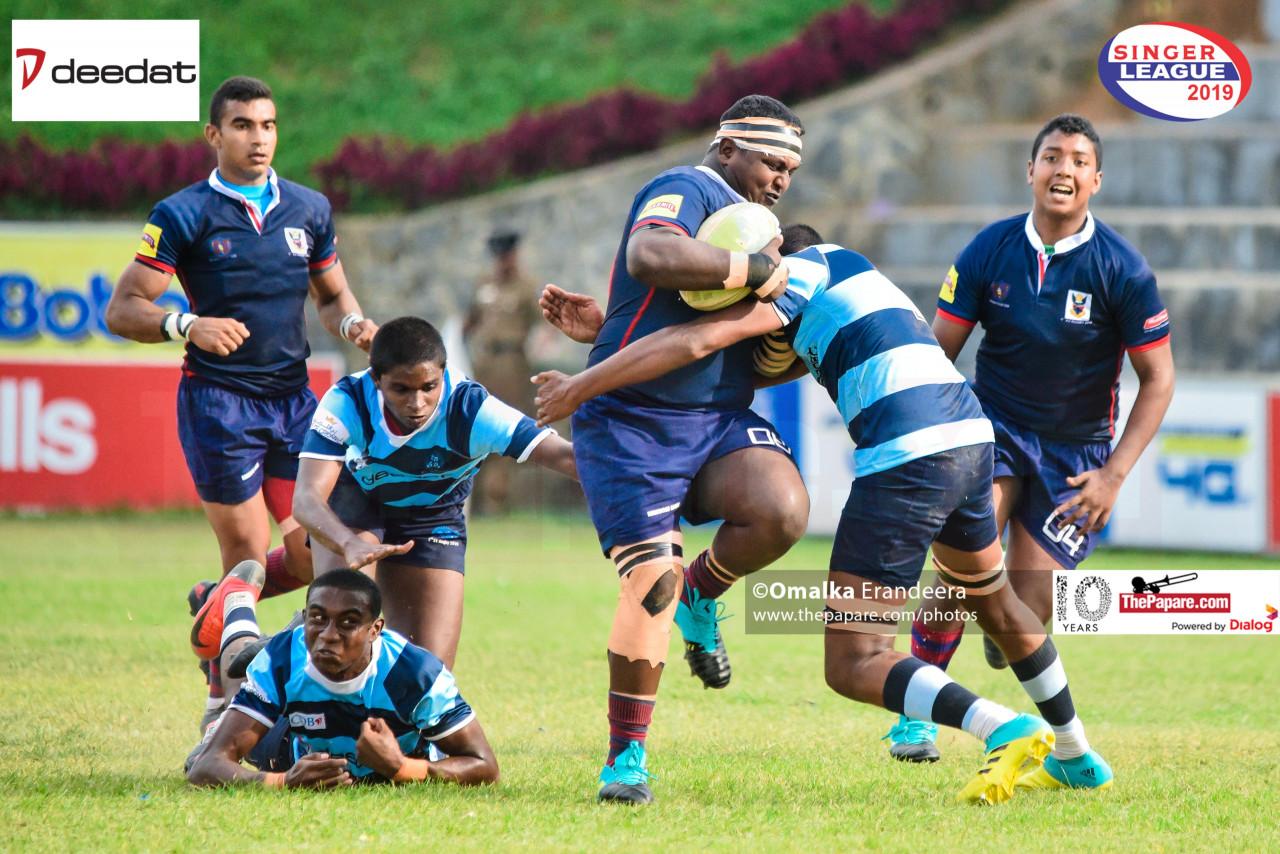 Kingswood has not had the best season so far, they’ve failed to make the Cup championship, but there’s always a silver lining. Skipper Weerasinghe has had a great first round as a player and the combination along with Tuan Fareed has been one of the best in the league. 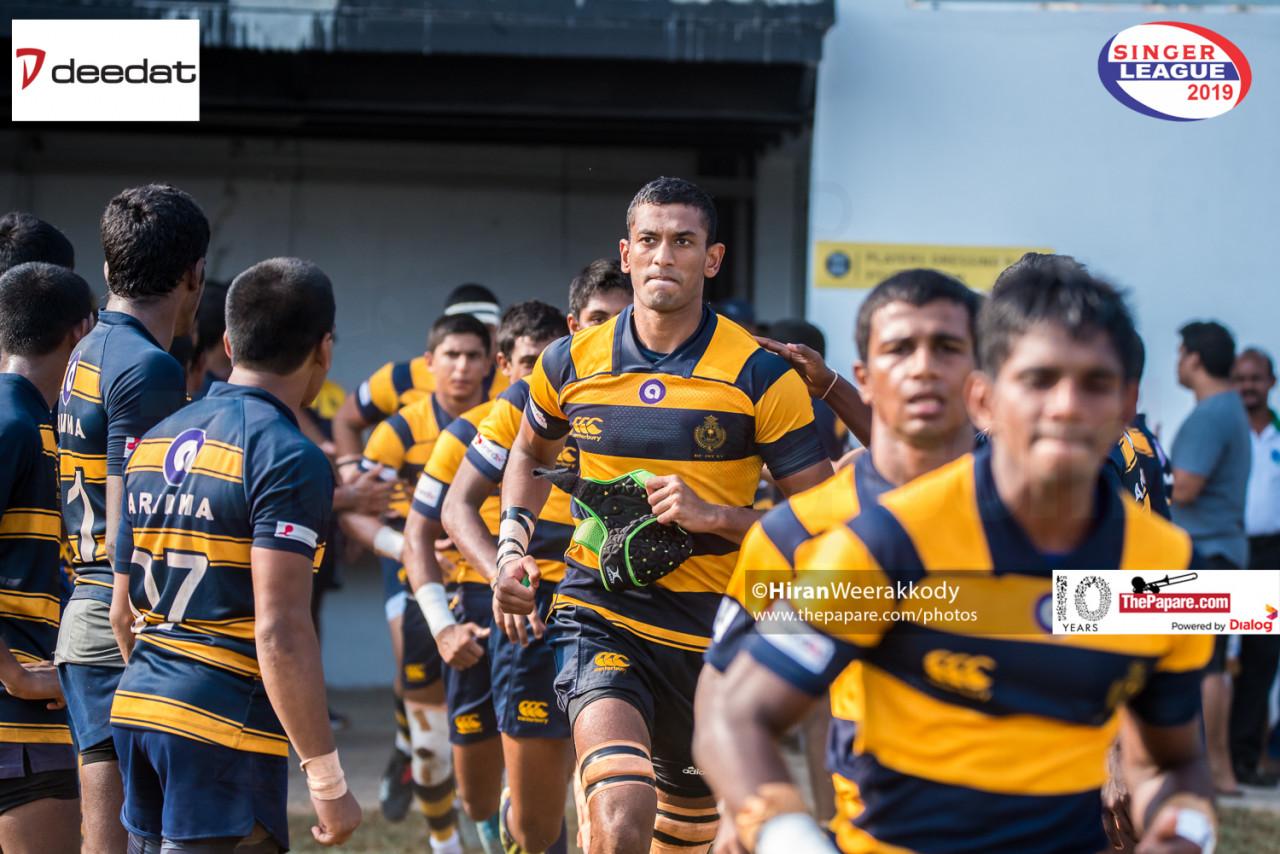 The best second-row forward in the Schools Rugby League, who has single-handedly won line-outs on numerous occasions for Royal. Adahan’s lineout expertise has come in handy for the Royalists several times, and he has made a match-winning impact in many games. 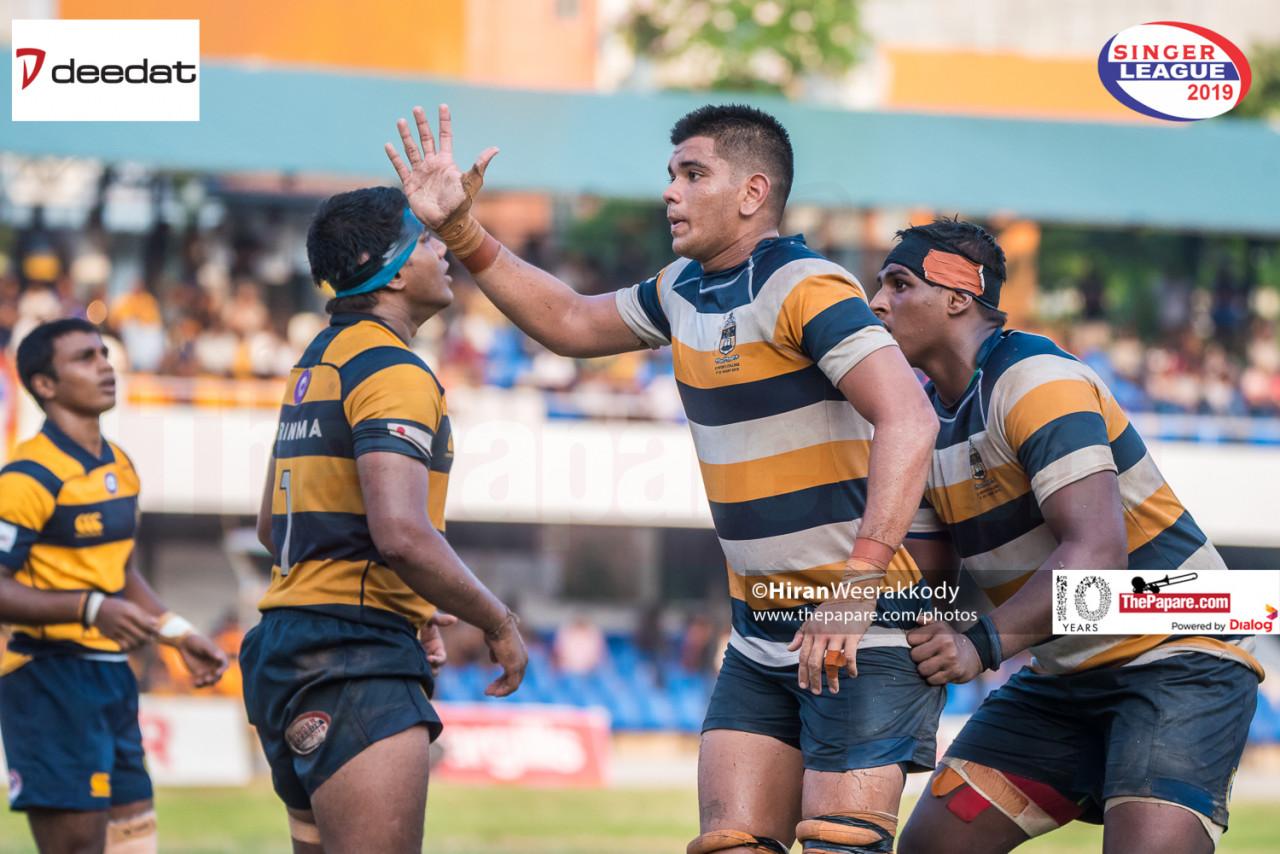 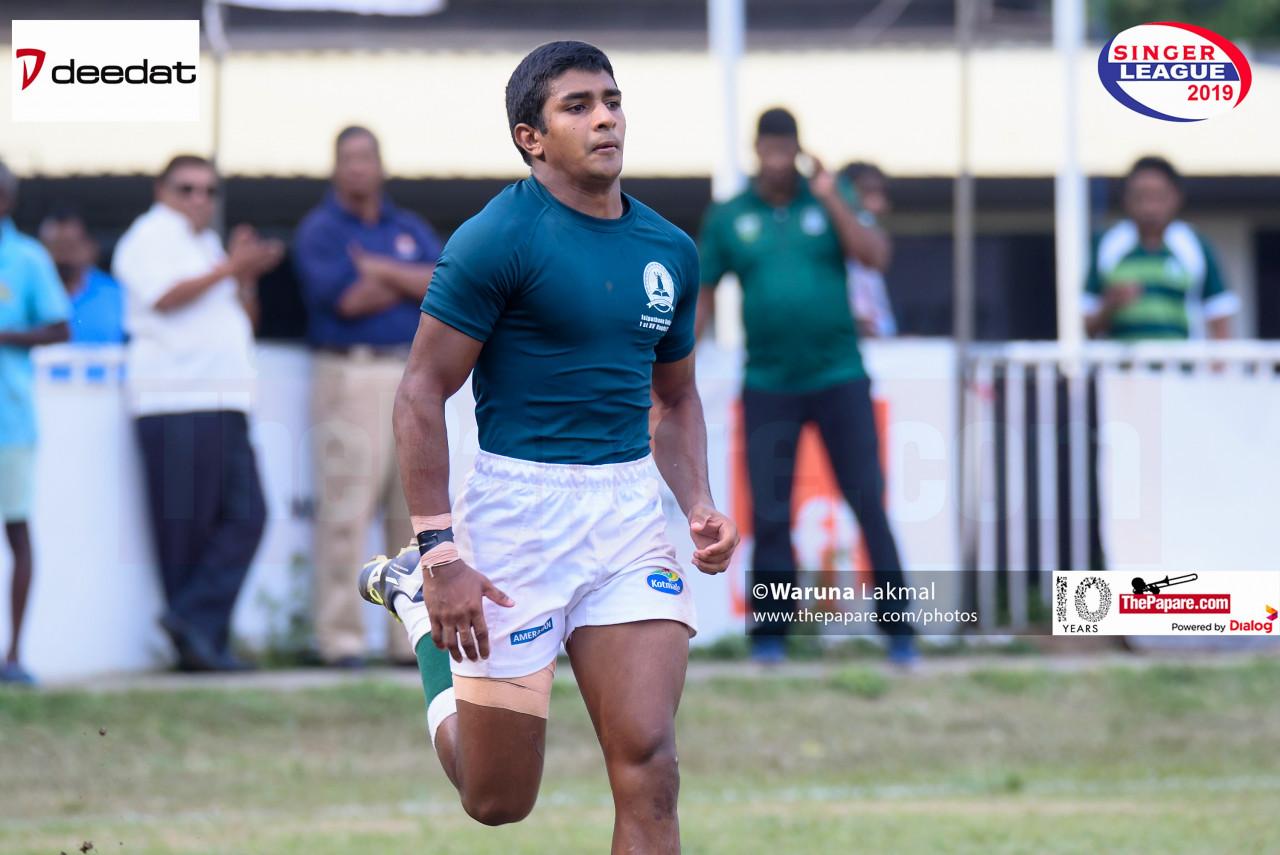 The captain from Isipathana has progressed to play a bigger role at flanker over the season. Playing at flanker as well as number 8, Serasinghe has played a key role in the turnovers, winning possession for the side. With him entrusted with the ball carrying duties, Serasinghe has showcased that he also has the pace to outrun opponents as well. 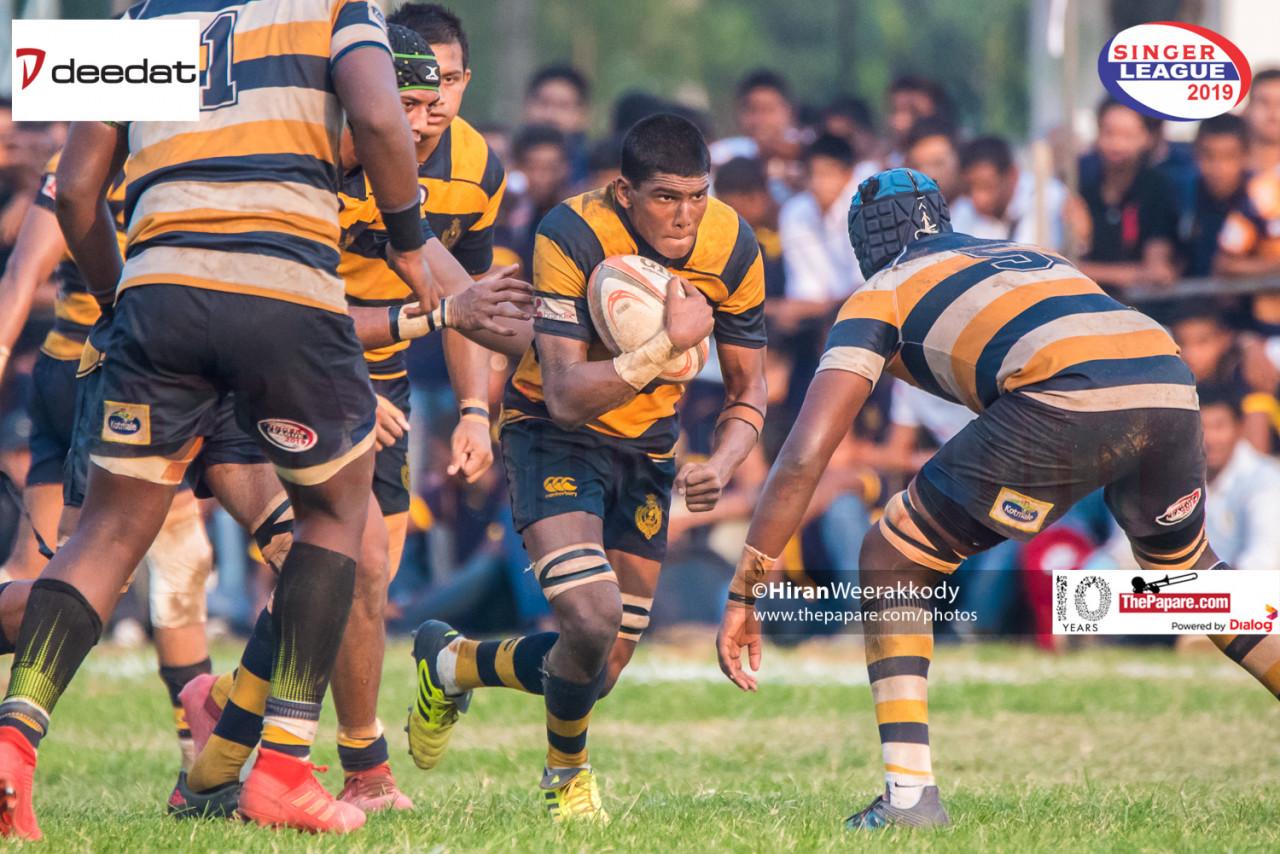 The flanker from Royal has played a pivotal role in Royal’s forward-dominant game. Samarasekara’s efforts have been vital, especially in the breakdowns. Playing at flanker, he has provided leadership to the forwards and is an important cog in the Royal attack. 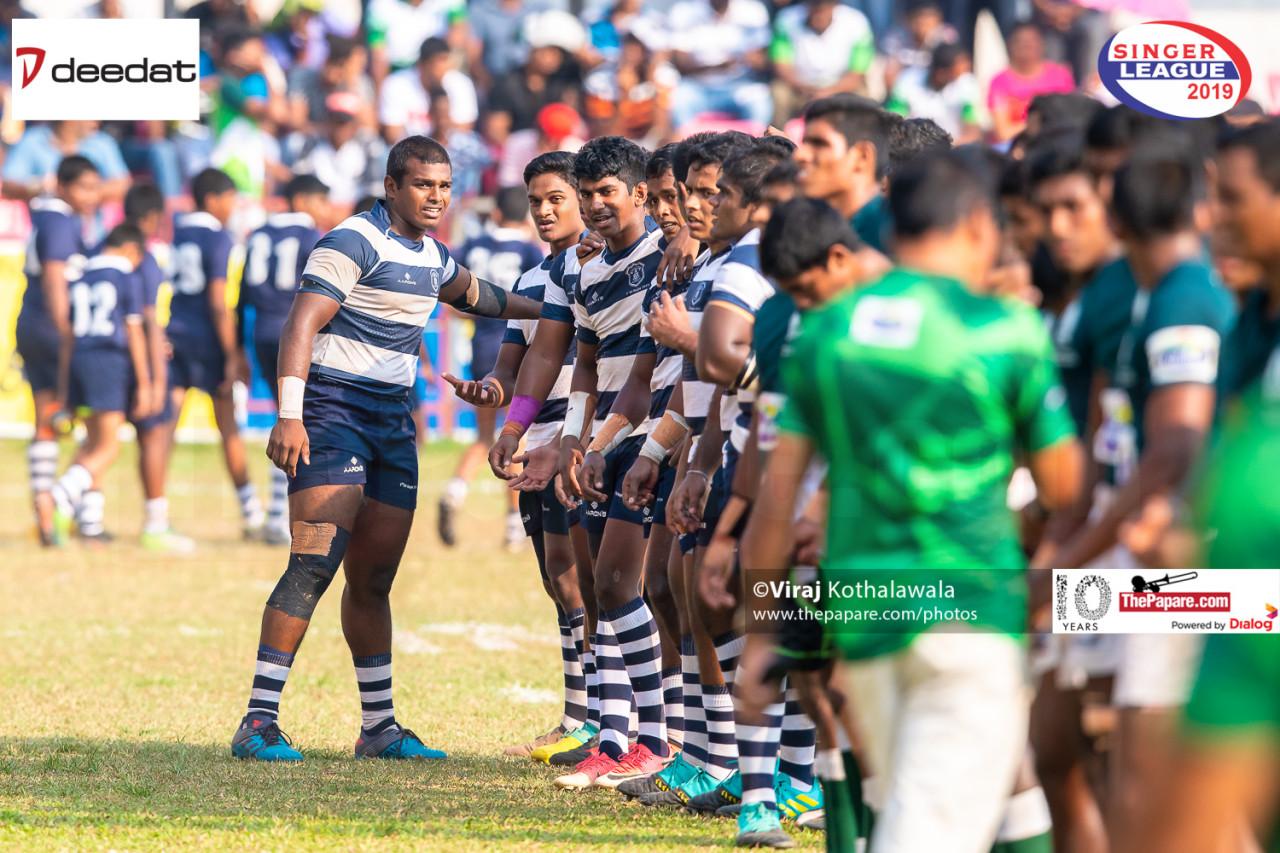 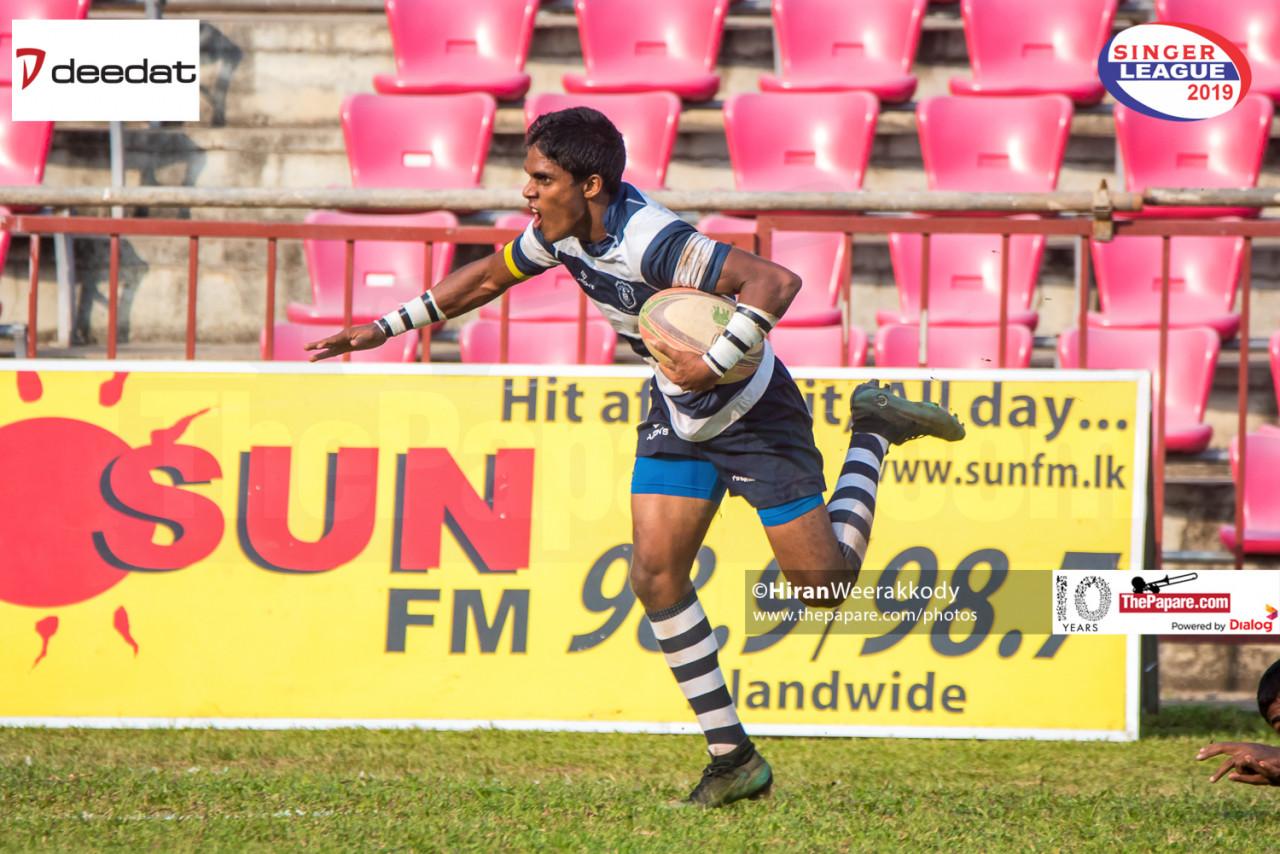 The dynamic scrumhalf who is playing his third season has been behind the unbeaten run of St. Joseph’s. After a scrappy start, Gunawardena has put his hand up and been a versatile player. The Rashean-Algama combo has been the difference for the Joes in this league. 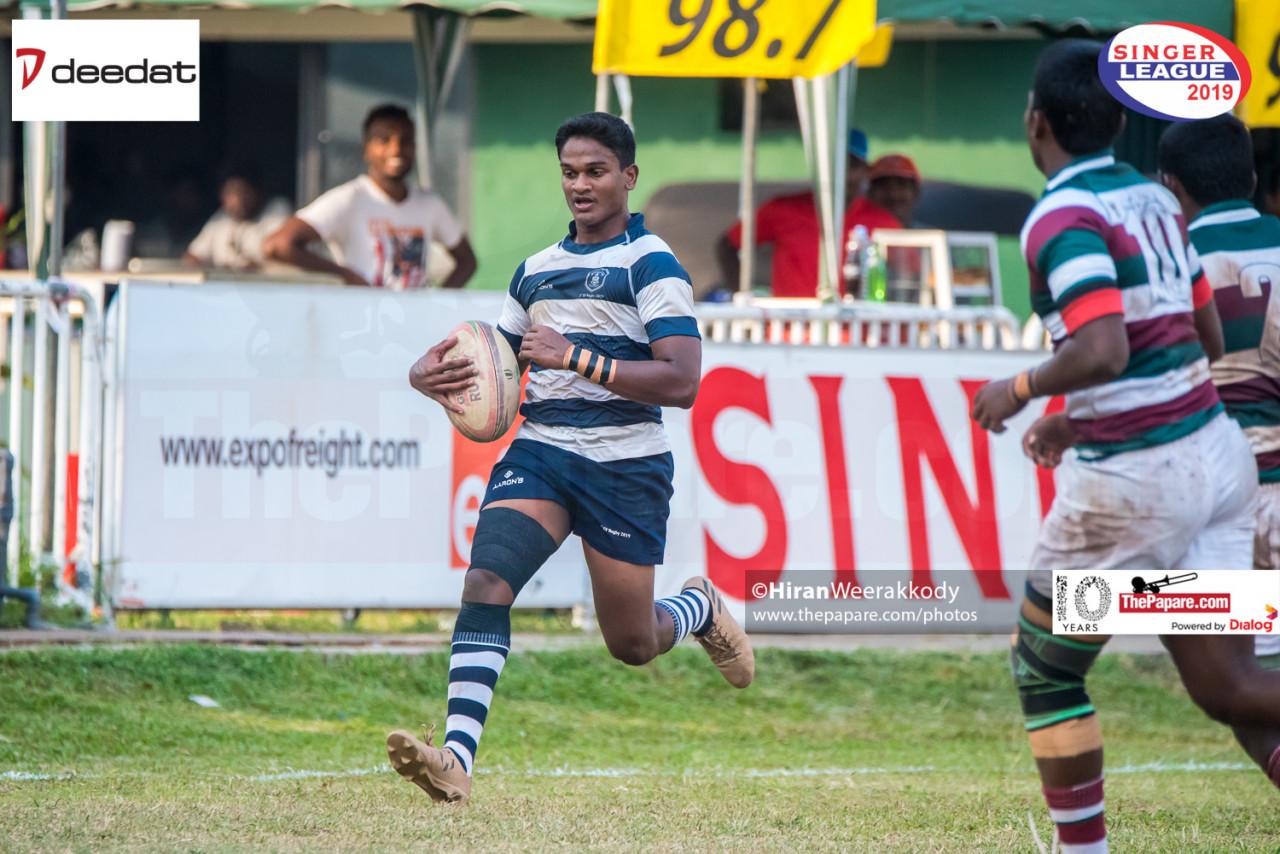 There has been one player who has stood out of the rest at first five-eighth. Getting his first start in the #10 jersey, Santhush Algama has been a livewire in the Josephian attack with a good sense of judgment. He also takes the top spot in point scorer’s list with 55 points under his name.

Closely missing out is Tharindu Walpitage of Wesley who has had a good stint in the 1st round too. 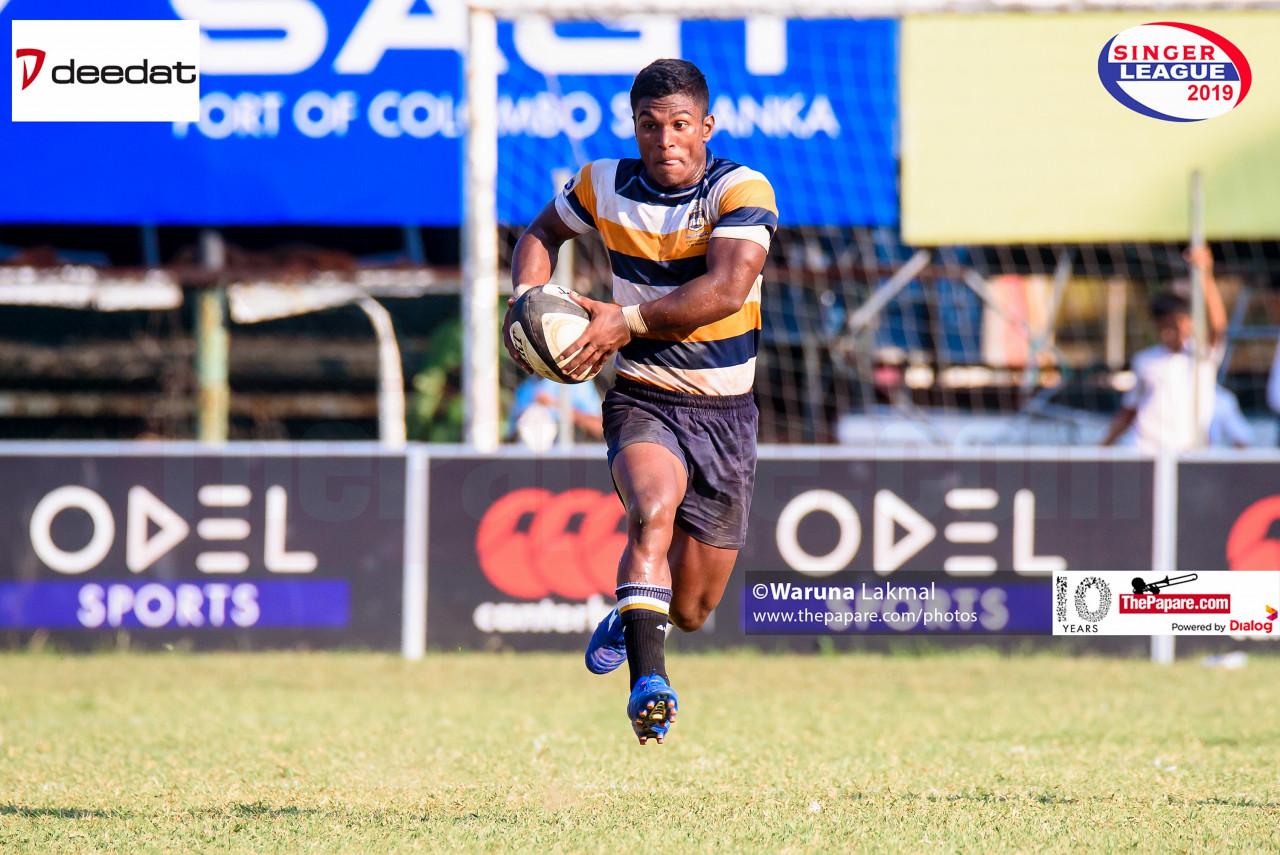 From playing at different positions in his rugby career, Raveen Fernando a.k.a ‘Kadiya’ seems to have found his sweet spot at wing.  The nippy winger of St. Peter’s has been a delight to watch throughout the 1st round and with 4 tries under his name, expect much more from him in the 2nd round. 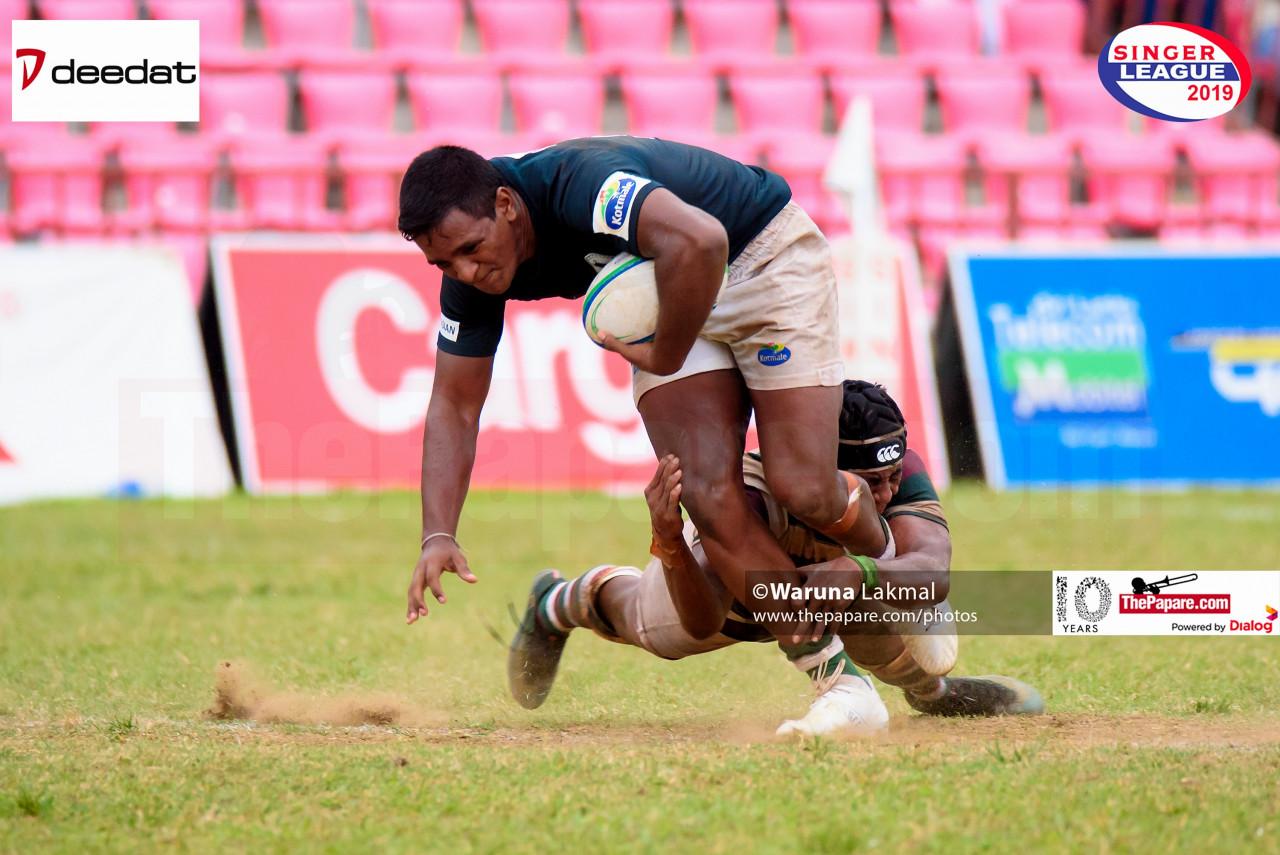 Undoubtedly the best player in the Schools Rugby League at the moment, Manilka Rubeyru has been the highlight of this 2019 1st round. With his clever judgment, he has taken the Isipathana College side to greater heights this season. 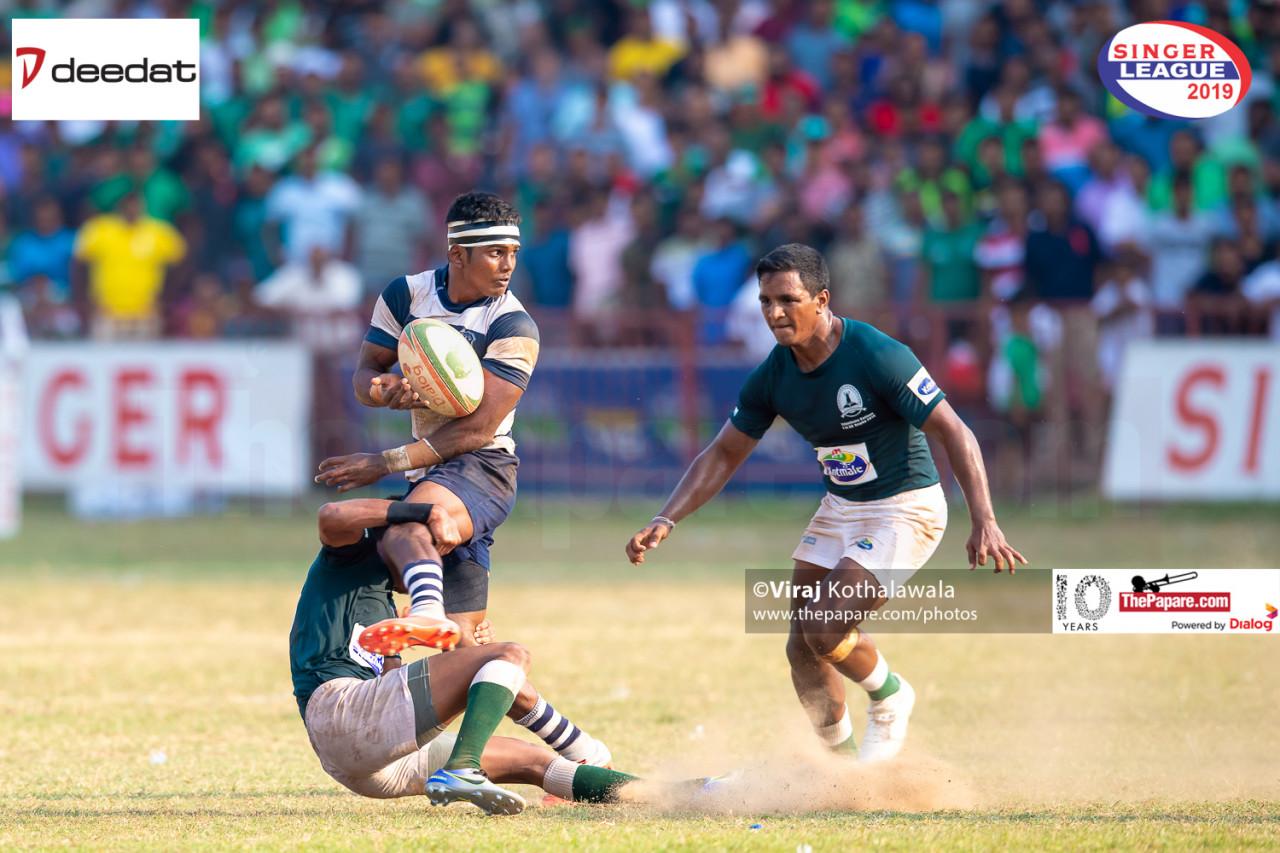 Getting a stepping stone from playing wing to now playing in the midfield, Tharindu Maduranga has come a long way. Stamping his authority in the Schools League, he has 5 tries under his name and has been a match winner for the Josephians. 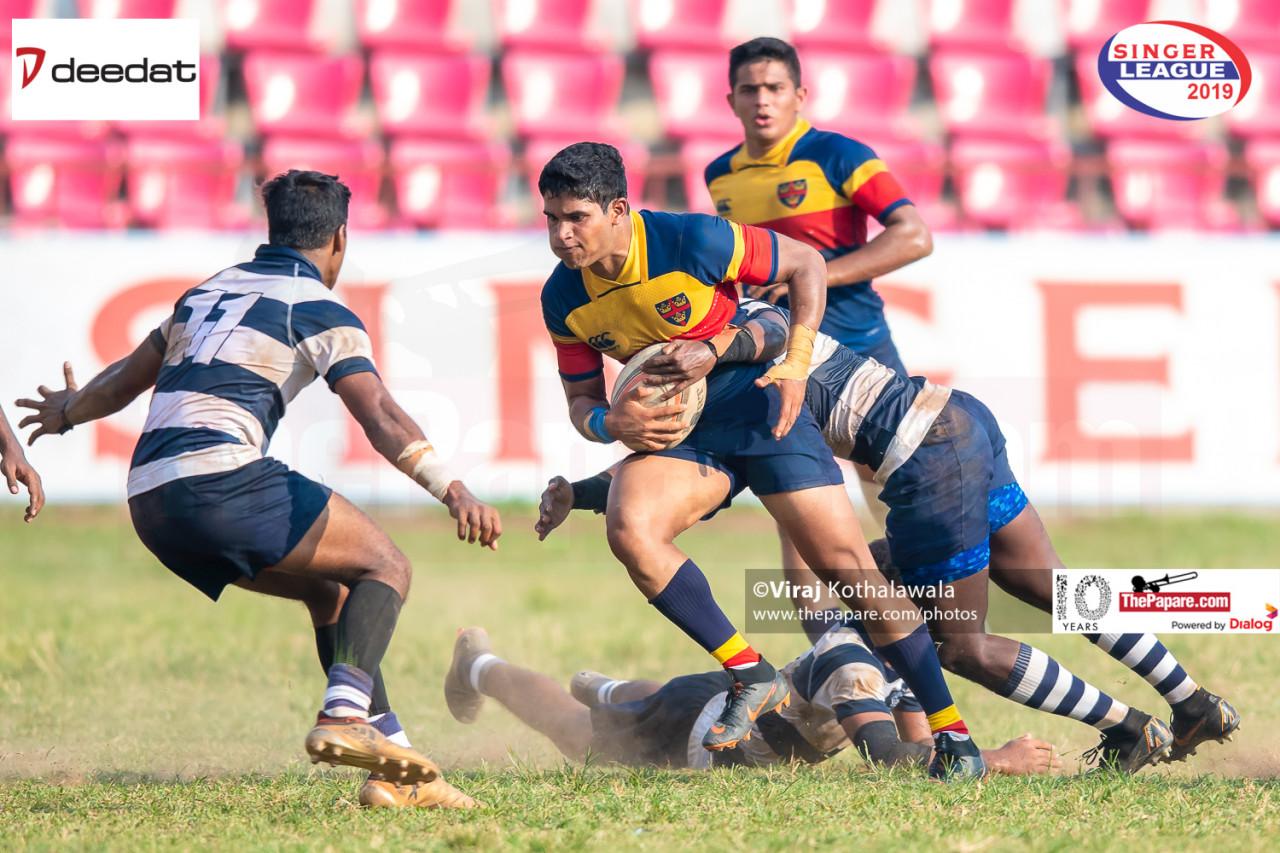 The find of the season has been Geeshapa Kulathunga of Trinity who currently leads the Top Try Scorer’s leaderboard with 6 tries. Presumed to be the fastest in the schools’ rugby league this year, Kulathunga has been the side’s sole playmaker. 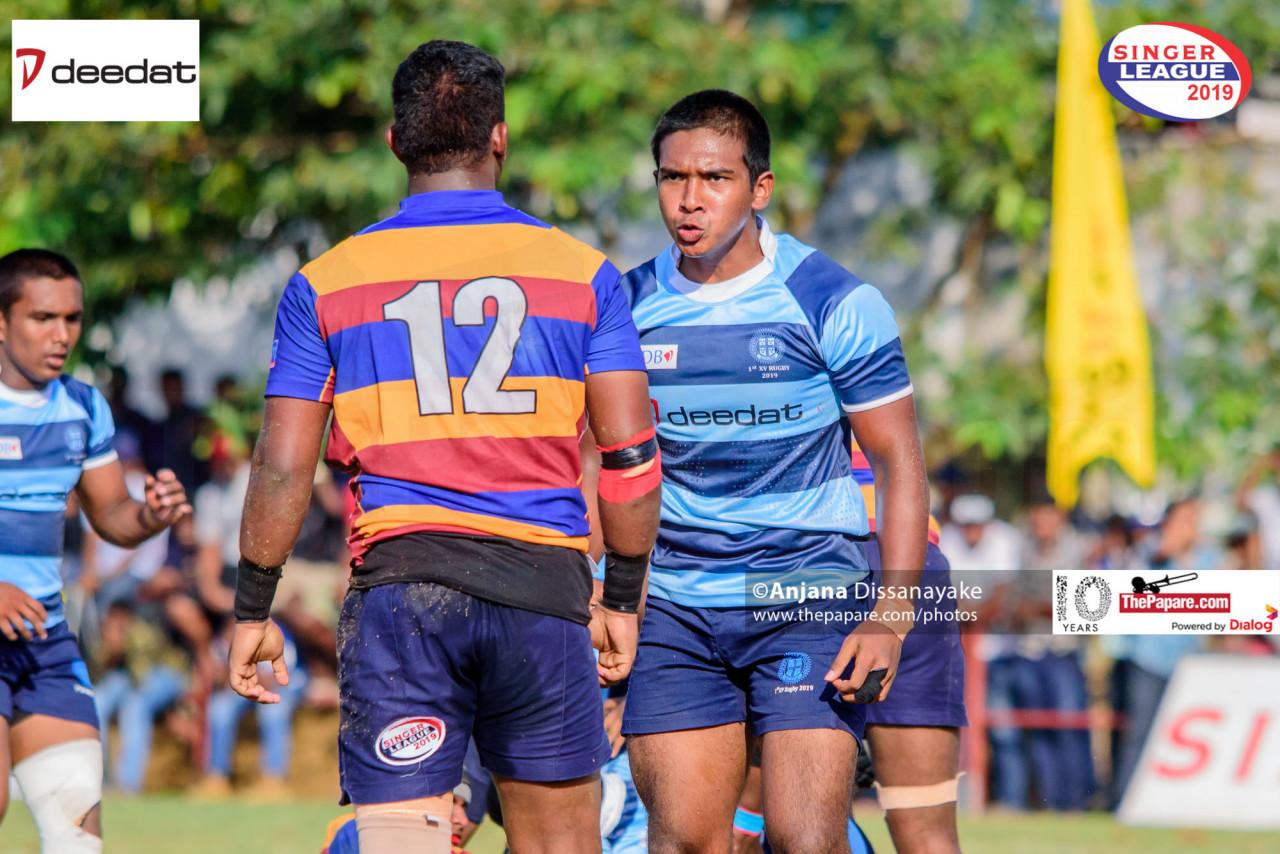 The captain of Wesley, Mursheed Zubair has been the Double Blues playmaker. One of the most experienced players in the league at the moment, Zubair is one of the best when it comes to tactics and open play. Playing at fullback, he has piloted many of the set-pieces that Wesley utilizes and currently has 40 points under his name.