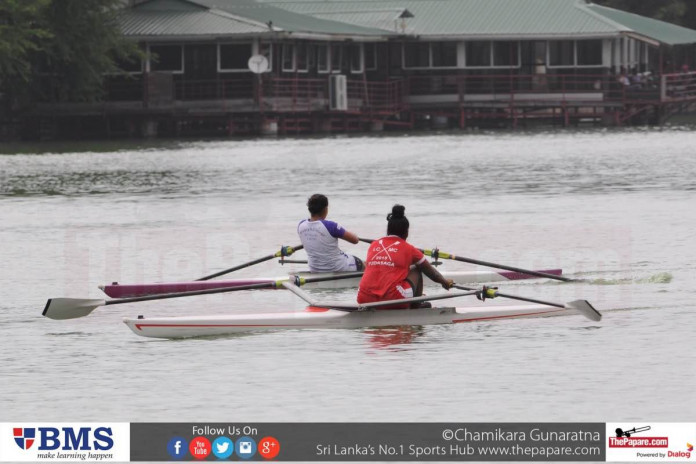 The 5th Schools’ Rowing Championship started off on Friday, the 28th October 2016, at the Colombo Rowing Club. The regatta will be raced over the course of 5 days, until 1st October 2016.

The proceedings of day 1 started off with the heats of the boy’s under 18 coxless pairs (2-) in which Dasitha Wickramasinghe and Tharindu Dasanayake of Ananda College won with a timing of 3 minutes and 59 seconds. In the boy’s under 20 double sculls (2X) race, Thakesha Jayaratne and Nadun Hettiarachchi of Asian International School were placed first and secured their place in the finals with a timing of 3 mins 51 secs.

In the girl’s under 18 coxless pairs (2-) race, Musaeus College kept on with their Ladies College-Musaeus College dominance as Binali de Alwis and Ranuli Wickramasekara (MC) beat Chanika Gunathilake and Shannon Perera of Ladies College, easily with a 11 second margin. In the under 20 coxed fours as well, Musaeus College continued their superiority as Ashvini Jayathilake, Isuri Kumarasinghe, Lishadi Mayadunne, Niseni Hewamallika and Mayanthi Weerakoon beat the Musaeus College ‘B four’ and the Bishops College four with a timing of 4 mins 17 secs.

The Royal-Thomian rivalry prevailed yet again in the under 20 boy’s coxed fours (4+) as Praveen Weerakkody, Lasaru Kudaligama, Charin Wijethilake, Thimesha Amarasena and Revata Karunasundera beat two other Thomian fours with a timing of 3 mins 38 secs. Arjun Wikramanayake, the Thomian sculler who saved S.Thomas’ College from a white wash at the Royal-Thomian regatta in the ‘B sculls’ event, beat his rival Pasindu Alwis yet again, with a close 1 second margin.

In the girl’s under 18 sculls race, Ishara Abbey of Ladies College showed her dominance as she beat Davina Koch of Ladies College and Umanda Tennekoon of Visakha Vidyalaya, easily with a timing of 4 min 53 secs.

The final three days of the 5th schools’ national rowing championship will host the semi-finals and finals of the respective races.