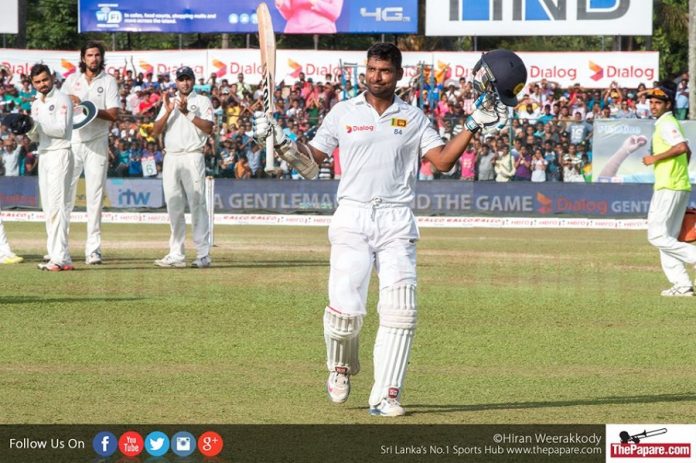 Sangakkara was in prime form as usual. He had scored 422 runs in Test cricket without being dismissed prior to the first Test against Australia in 2007. His six most recent Test innings included two double hundreds and four hundreds. The Australians should consider themselves fortunate that Sangakkara missed out on the first Test due to injury but he made up for it in the 2nd game.

Sri Lanka had already lost the first Test and coming back from the injury, Sangakkara was still trying to find his timing and rhythm. Sri Lanka’s batting frailities were exposed once again and Australia set them a target of 507 to win and level the series.

A couple of iconic cover-drives against off the bat of Sanga were soon on show.  The ball sprinted out to the boundary, everytime Stuart MacGill missed his spot. Marvan Attapattu gave good support while Sanath Jayasuriya hung on for a while too. First inning’s hero Mahela Jayawardene got a peach of a delivery from Brett Lee, but, as per norm, Sangakkara carried on. He had seen the loss of the openers, the loss of middle order batsmen and the loss of lower order batsmen. Johnson tried to bounce him out, Sanga stayed inside the line of the ball and either smashed it or glided it to the boundary. Brett Lee, in the peak of his career tried the same. This time Sangakkara moved to the off side and flicked him or pulled him to the boundary through the leg side. Sangakkara was closing in on a third consecutive double hundred in three games.

The Aussies certainly seemed like a worried bunch. It seemed harsh for the world’s best team to be meted out such a punishment at home. The way Sanga was going, even 507 did not seem out of reach, but it was not to be. He was wrongly given out on 192, just eight runs short of what would have been third double century in as many games, a feat only achieved by Sri Donald Bradman.  Sri Lanka went on to lose the game by 96 runs.

Once again Sangakkara was in South Africa.  Sri Lanka had lost the 1st Test match by an innings and 81 runs and were under tremendous pressure. Sangakkara’s return in the game were just two single-digit scores.

After winning the toss, Sri Lanka made a competitive 338 in their first inning thanks to a classy hundred by Thilan Samaraweera. He became only the second Sri Lankan to make a hundred in South Africa after Hashan Tillakaratne’s 102 not out back in 2002. Dinesh Chandimal, made 58 in his 1st innings in Test innings. Sangakkara fell for a duck.

The bowlers managed to skittle South Africa out for 168. Chanaka Welagedara picked up his first five-wicket haul in the Test cricket as Sri Lanka earned a lead of 160.

The second innings began with Sri Lanka losing three wickets for 44 runs. Sangakkara was solid, unlike the first three innings in South Africa and found good support from Samaraweera. Dinesh Chandimal once again made a fighting half century. Sangakkara followed the path of Samaraweera, to make his first century on South African soil. Along the way, he dragged Sri Lanka’s lead over the 400 run mark, leaving very little chance for a South African win.

With the pitch deteriorating, Rangana Herath took control of the match, finishing with another match-winning five-wicket haul. Sri Lanka won by 208 runs to secure their first ever Test win on South African soil.

18 years had gone by since Arjuna Ranatunga’s Sri Lanka won the World Cup in 1996, Sri Lanka’s only global title at the time. With Sangakkara and Jayawardena set to retire from T20s after the World T20 in 2014, the occasion was even more special.

As was the norm in Sangakkara’s era, Sri Lanka made it to another Final in a global event – the 5th time in 7 years. India went into bat. Virat Kholi unleashed some fireworks but Malinga and Kulasekara bowled one of the best death over spells in T20Is to restrict India to 130.

Sri Lanka came out to face a trickey chase and opener Kusal Perera didn’t last long. It was only when Dilshan tried to slog-sweep Ashwin and found Kholi at the edge of the boundary that a nervous looking Sangakkara walked into the middle for the final time in his International T20 Career.

Sangakkara, having scored 14, 0, 4 and 1 so far in the WorldT20, looked emotional and under pressure in his final innings. On 1, he played a pull off part-timer Suresh Raina and top edged it towards deep mid-wicket. Luckily for Sangakkara, it fell comfortably short of the fielder. It seemed like Sangakkara was itching to play a big shot to get himself going when Dhoni decided to bring Ravindra Jadeja into the attack.

After a few minutes at the crease for the final time in a T20 international, Mahela Jayawardena walked out to a standing ovation. He got out playing somewhat of an agricultural shot. Eight overs later, with the help of Thisara Perera’s clean hitting, Sri Lankans were celebrating. Sangakkara had 52 not out to his name in his last international T20 innings, sending fans to raptures. 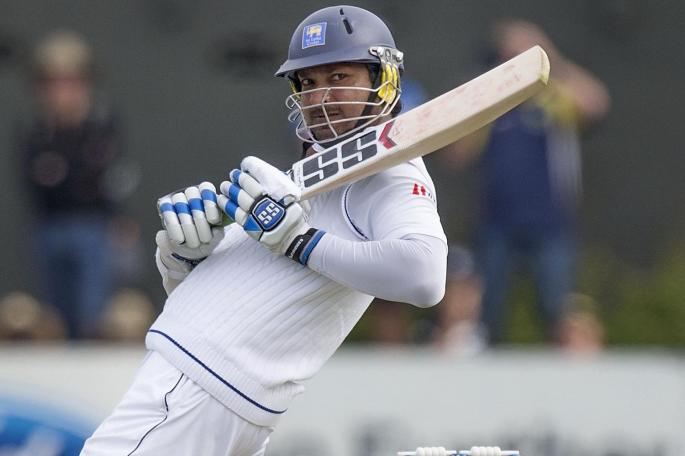 Sanath Jayasuriya and Muttiah Muralitharan had retired a long time ago. Dilshan and Malinga had retired from Test cricket too. To add to the team’s woes, his best friend Mahela Jayawardena had just retired in the last series. Sangakkara was playing with a younger generation of cricketers in a new-look Sri Lankan side.

In the 1st Test of the series Sangakkara made seven runs, getting out to Trent Bolt in both innings and Sri Lanka lost the match by 8 Wickets.

Sri Lanka won the toss and restricted New Zealand to 221 on a lively pitch on day one of the second Test. Sri Lanka’s batting looked shaky once again, Sangakkara walked in with the score on 18. Trent Bolt was at the other end ready to bowl to Sangakkara, combining nicely with Tim Southee. The first ball was a peach, it angled into the off stump and left the batsman at the very last moment. Sangakkara, having worked so hard in the couple of days between the Tests, was ready for it. He watched the ball come to him, he watched the ball swing away from him, he watched the ball until it reached the keeper’s gloves. It was a leave as good as any other shot played in that game.

Sri Lanka slumped to 29 for 3, then to 78 for 5. But every time Sangakkara looked like he would run out of partners, someone stepped up to hang on for a while. Sangakkara didn’t seem to care about wickets falling at the other end. He left many deliveries at the start. A few singles here and there, a gentle push down the ground for four was his way to 30-40. Then came a bent knee cover-drive for four off Southee, Sangakkara was slowly getting into his zone.

Sangakkara slowly started to unleash after getting to his fifty. Everything full was driven down the ground, anything short was pulled or cut. Spinners were hit down the ground with ease. A square-cut off Mark Craig took Sangakkara to his 38th and last Test Hundred. Sri Lanka were 6 down with no recognized batsman left when he reached the milestone. On the way to his hundred, Sangakkara became the fastest to 12,000 Test Match runs in the history of cricket. A record Sangakkara holds for every 1000 run landmark in Test cricket, since reaching 8000 runs.

Sri Lanka lost their 7th wicket with the lead on 21. But, with the support of the tail, Sangakkara managed to drag that lead over 100 on the way to his double century. Most memorable moment was the sweet revenge Sangakkara took from his nemesis in the first test, Trent Bolt.  He cover-drove Bolt to the left, to the right and over extra cover like he was doing a master class on placement. The double hundred was reached with a serene cover drive, leaving the crowd on their feet admiring the Sri Lankan run machine. Sanga got out soon after reaching his double hundred, by then, the Sri Lankan lead was up to 135 and they were in with a sniff.

Poor catching and bowling meant that Sri Lanka went on to lose the game. 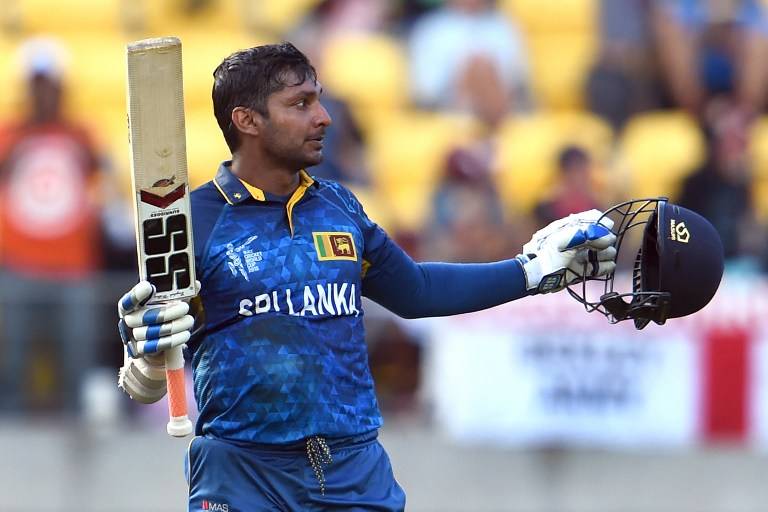 Sangakkara was in his farewell series. He and Mahela had already announced their retirements from International Cricket before the tournament had begun. Everyone, including Kumar Sangakkara and Mahela Jayawardena, knew this would be their Final World Cup, hence their last chance at the trophy.

Knowing all that, what Sangakkara came up in that tournament was just unbelievable.

He started the campaign slowly with 39 and 7 in the first two league games. Next was Bangladesh; unfortunately for them, Sangakkara was hungry for runs in his last World Cup. The result was a fiery 76 ball 105 not out. Bangladesh lost the game with Dilshan also making mammoth 161 not out.

Next came England and after a fluent Joe Root hundred, Sri Lanka were behind the ball game having conceded 309 runs. Dilshan and Thirimanne began well in the chase, but Dilshan fell with the score on 100 and Sri Lanka requiring 210 in 30 overs. Thirimanne went on his merry way to 139 not out while Sangakkara drove, flicked and pulled his way to a blistering 86 ball 116 not out. England had no further success with the ball, and Sri Lanka chased down the target with 16 balls to spare.

The Australians were ready; they knew Sangakkara was in red-hot form. Yet, they were unable to stop him. Johnson’s pace was taken care of with touch and timing, Starc’s deadly Yorkers were made to look too full, Faulkners’ slower balls treated with no respect. The Aussies could not stop him from scoring another run a ball century. His third in a row. Sanga was dismissed and Sri Lanka lost but the master had once again made history in his last World cup.

Scotland were next. As per usual, Sangakkara did not disappoint his fans. The Scotland bowlers, who had little experience in playing international cricket, were treated accordingly. Sri Lanka easily won the match. Kumar Sangakkara had become the first player in history to make four consecutive 100’s in ODI cricket.