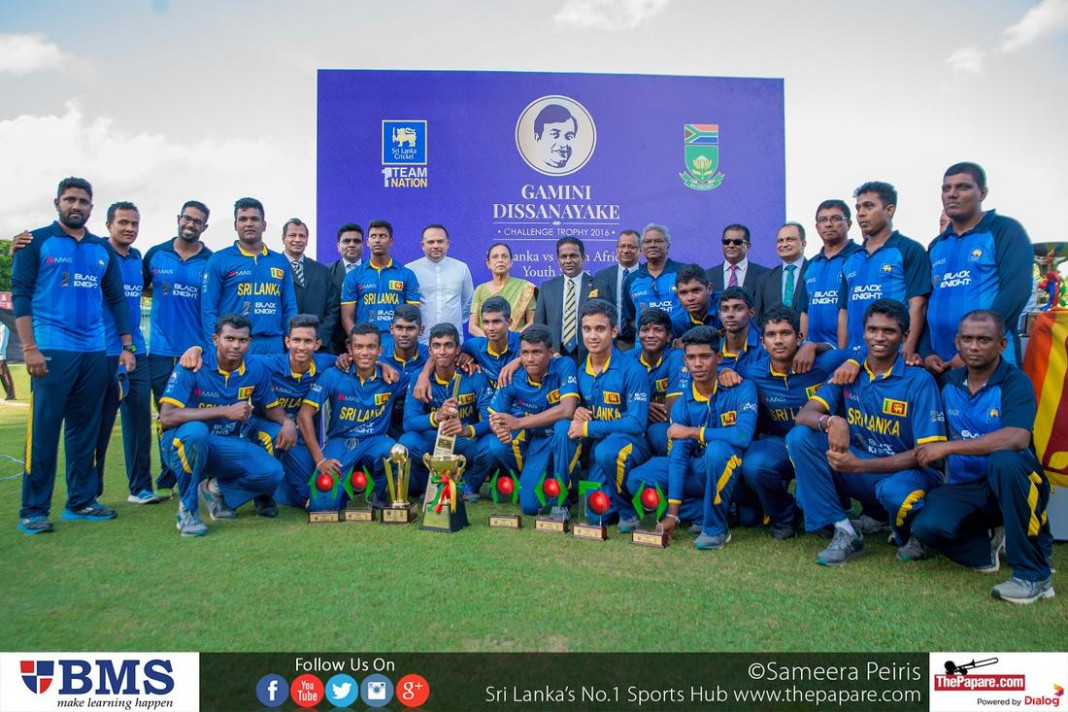 18-year old Sammu excelled in all three disciplines, scoring an unbeaten 70 runs, grabbing 3 wickets and taking 4 catches to win both the Player of the Match and Player of the Series awards.

Earlier in the day, after opting to bat first, the South African openers Ricardo Vasconcelos and Wandile Makwetu had no problems in putting away the Sri Lankan opening fast-bowlers, Mishane Silva and Jehan Daniel, as they raced to 38 in the first Powerplay. Sammu trapped the left-handed Vasconcelos plumb in front in the 10th over of the innings, to draw first blood.

In the 13th over, Makwetu closed the face of the bat early and edged to Sammu at first slip, off left-arm spinner Damitha Silva to end his 39-ball 26. Jerome Bossr fell in the next over giving an easy caught & bowl chance to the Man-Of-The-Match as the visitors were 3 down for only 43 runs.

As the Lankan spinners put the brakes on the run-flow, Van Tonder miscued a sweep and was caught at short fine-leg as Jayawickrama broke the strong resistance in the 37th over. No.6 batsman Ethan Bosch contributed with 20 while Mulder reached his half-century as the visitors looked to breakaway and post a formidable score.

Silva struck twice in two balls to dismiss Mulder and Jesse Christensen to halt the South African charge. None of the tail-enders apart from Kenan Smith (20) made a notable contribution as the South Africa U19s ended on 195 for 9. All four spinners, Sammu, Damitha, Praveen and Ayana Siriwardana bowled their full quotas. Sammu and Damitha were the most impressive taking 3 for 38 and 4 for 48 respectively.

In chase of 196 runs to seal the series, opening batsman Pathum Nissanka played across the line and was trapped LBW in the 2nd over, bowled by left-arm seamer William Senedin. Skipper Avishka Fernando was the next to be dismissed for 16 as the ball ricocheted off the bat on to the stumps while he attempted a hook shot off Senedin.

Mishane Silva edged to first-slip off Mulder but the biggest setback came in the 25th over with the score on 99 when the set batsman, Shanogeeth Shanmuganathan was caught down the leg-side brilliantly by Ricardo Vasconcelos off Mulder. The Trinitian opener made a responsible 66-ball 41 which included 5 fours.

Ashan needed a reliable partner to guide the team home and he found it in Bandara. They rotated the strike perfectly and maneuvered the field to get the odd boundary in a match-winning partnership. An unbroken 5th wicket stand of 100 between Bandara and Ashan guided the home team to victory. Ashan’s knock of 70 came in 103 balls while Bandara made a 47-ball 37.